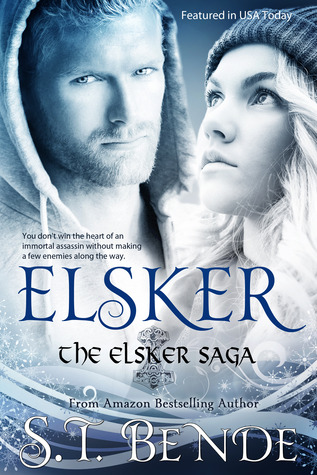 Kristia Tostenson is from a small town in Oregon. Kristia worries that she'll just following along with what is expected and marry one of the few suitable males after finishing university and settling down to a boring life without adventure.  Kristia decides that she wants more and  takes a leap of faith and enrolls in Cardiff university  for a year abroad and thus begins an adventure she could never have predicted, even in the weird dreams and visions she's had over the years.

When Kristia first meets Ull Myher, her world stands still. Ull is not only the most beautiful man she's ever seen, he's actually a Norse god.  The two share a wild wind romance but always hanging over their head is the fact that Ragnarok hasn't happened yet.  It's difficult to make plans for the future when the world could come crashing down at any moment.  When it is announced that Baldr will die soon, thus setting off the beginning of the war that brings an end to the Asgardians, Kristia knows that she has a decision to make.  Will she flee and return to her old life or will she marry Ull and fight side by side against the enemies of Asgard.

I picked up Elsker because I'm an absolute sucker for any story with Norse mythology as its basis. I even over looked the fact that I'm not overly a fan of YA to give this book a chance.  Unfortunately, as it turns out, I should have left this one on the shelf.  Elsker reads like Twilight fanfic.  I'm absolutely positive that S.T. Bende needs to pay Stephanie Meyer royalties for this hot mess masquerading as a tale about Norse Gods.

Kristia is the same kind of blank slate that Bella was in Twilight. It's clear that S.T. Bende wrote her this way so that any white woman could envision herself in this role. There's absolutely nothing interesting about her whatsoever which makes it all the more astounding that Ull manages to scrape together attributes he admires, making her worthy of being his wife.  Kristia is clumsy and is either always tripping or is in danger of tripping.  Does that remind you of anyone?  She's also incredibly insecure and talks constantly about how plain she is and worries about whether or not she's actually good enough to date or even marry Ull. If that were not enough, Kristia also has a puritanical streak and some pretty archaic ideas about modesty and sexual chastity that are extremely outdated coming from anyone who wasn't forced into a purity ball as a teenager. There's also the issue that throughout the novel, Bende cannot seem to decide what age Kristia is. In parts of the novel she's 20 and in others she's 18. Given that Elsker spans less than nine months, such a discrepancy makes absolutely no sense.

As a protagonist, Kristia is simply annoying.  Kristia deems all the women around her to be more beautiful than her and more graceful.  It's all she bloody talks about. Given that there are only three male characters, Kristia feels inadequate a lot.  For all of the female characters in this book, you'd think that Elsker would pass the Bechdel Test but you'd be wrong.  The women may talk briefly about their career ambitions but generally speaking, the conversation always seems to revolve around Kristia's relationship with Ull, or how hot Ull is, or how Kristia wants to become a God so that Ull doesn't have to give up his immortality to be with her. I know that they are sophomore University students but they read instead like 14 year old girls excited about a game of spin the bottle.

Ull, is Bende's version of Edward, and is impossibly old and his language is peppered with archaic phrases. Ull is Asgard's top warrior and the God of winter.  Ull tries to calm Kristia's fears that she's unworthy to wed him by revealing that as a warrior, he has killed countless people.  Even though this happened in battle, it should be enough to at least give Kristia pause but in true Queen Amidala fashion, Kristia doesn't care that her man literally has blood pouring from his hands.

I'm not one who believes that ancient beings falling in love with teenagers or young adults is anything other than predatory. I will however give Bende credit because she bothers to take the time to address the centuries of age gap between Ull and Kristia.

"You grandmother would have found me inappropriate. It is not right for a man my age to want to do the kinds of things I plant to do to an eighteen-year old."

Now it was my turn to blush

"Does it bother you that I'm younger than you?" I bit my lip

"It is not going to stop me from pursuing you, if that is what you are asking."

So dude straight up knows that being in a relationship with Kristia is wrong but he's going to forge right on ahead. He is essentially dating the equivalent of an infant and has no problem with it. Of course, Ull is honourable and decides to forgo sex until he and Kristia take their vows. I'm sure that this was meant to make this relationship seem less creepy but it absolutely doesn't work and also, it adds more credence to the idea that Ull in this book is nothing more than a Norse Edward. Given that Ull is thousands and thousands of years old, I don't buy for one hot minute that he and Kristia actually have anything in common or can engage in a conversation of any worth.

Ull is almost as blank of a character as Kristia and only saved from being the equivalent of being akin to soggy lettuce by the fact that he is a Norse God.  What I cannot wrap my around however is why so many of the Norse Gods in university?  Yes, it's understandable that Midgard might hold delights  unavailable in Asgard, but I cannot for the life me understand how it makes sense to have these ancient beings in college writing papers and doing assignments. I guess because Edward went to highschool, so Ull must go to university.

The only blessing in Elsker is that it is a really short book and can be read in a few hours. I don't think I could have taken much more of Norse Twilight. There's not an original line or character in this story.  Norse mythology should have provided a wealth of inspiration to write a good book, given that the myths are largely speaking epic tales but what did Bende do? Why, she went with the Twilight Saga.  I see the appeal of wanting to be a commercial success but why Bende thought that simply repeating something (badly I might add) that had already been done would lead to the result they want is beyond me. Unless you're a huge fan of Twilght and have always wondered what Bella and Edward would have been like using Norse mythology instead of sparkling vampires, I'd leave this one alone. Consider this review a PSA. You only have so many hours in your life to read and it would be a shame to spend even five minutes on this drivel.