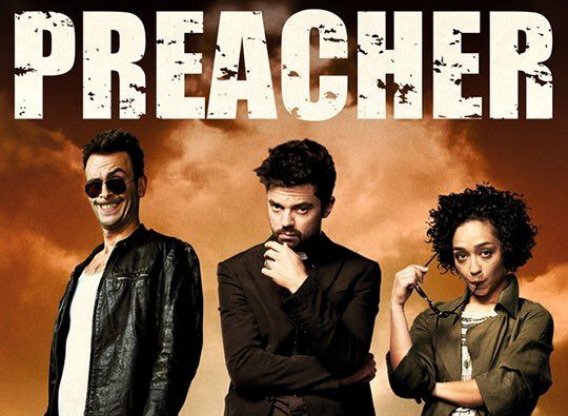 Which is why we see him gunning down Hare Krishnas with his Grail organisation and they, in turn, are also armed with big guns. For a fire fight. With Hare Krishnas. The reason for this murder spree is apparently to try and get everyone to declare loyalty to Humperdoo - the heir of Jesus. Who isn’t exactly Herr Starr’s favourite choice since he is severely developmentally disabled.

A lot of this show is basically “because Preacher.”

We also get a prequel of what Jesse did for the Angel family when he was younger - basically selling his grandmother’s magical services. In one example to a school teacher who molested a student and then accused her of being obsessed with him and needed her to go away. Magic successfully makes her forget him and not ruin his career and marriage… but when he misses a payment he gets beaten tortured- and his soul sucked out for Grandma. Apparently this is part of her health regimen.

In the modern day, Grandma has great plans for Jesse, trying to revitalise her business, open up the ominous “tombs” and get her lots and lots more souls since Jesse is their chief salesperson. This may also be why her health isn’t doing so well without a nice diet of souls.

Tulip is back and Jesse and Cassidy are still hissing each other for their very very very annoying love triangle. Jesse tries to get Cassidy to leave which certainly isn’t happening. While Cassidy tries to get Tulip to leave with him and plants lots of suspicions in her mind about Jesse and his plans, his messiah complex et all. Tulip isn’t having it though since Jesse defeated the Saint of Killers and gave up his souls for them, which is pretty huge so Tulip isn’t willing to abandon him

She also claims not to remember what happened when she died, exactly, though she does remember her family scenes. And has vague memories of dog-god.

He promises that once he’s free from his granny they will then kill… well… everyone. Herr Starr, the entire Grail organisation. Grandma and her cronies. Everyone. Quite possibly anyone in the vague neighbourhood.

We also have Cassidy make friends with the deeply weird TC over drugs and Tulip snarl at Jody and his guns. While they do this, one of Starr’s lackies (Featherstone - who killed Tulip - and Hoover) is exposed and Tulip promptly beats her handily (because Tulip takes no prisoners and is extremely dangerously) and they plan to take them both into the woods and kill them, nice and neat. Except Jesse intervenes and manages to free them both (he needs them alive to convince Starr he doesn’t want to murder hum honest) - and is caught by Tulip

Tulip is not amused - but is convinced by Jesse’s argument that he needs Genesis back so they can murder everyone properly.

Jesse puts his plan in motion, distracting his family by provoking some local people who hate him (either because of sex or murder. Apparently. This is Preacher, I’m going to go with both) so everyone can be distracted by a big firefight while Jesse has a sit down with Herr Starr

Starr isn’t easily foiled by Jesse taking his soul back and then using Genesis to try and make him eat his own dick. He’s all ready for that nonsense and duly contemptible. Instead he throws in a new sales pitch for being the Messiah, especially since his boss (and yes he does have a boss. As he points out, he’s trying to rebel against someone so he must have a boss) is trying to accelerate the return of Humperdoo as the Messiah for the whole world (hence the Hare Krishna massacre) which, again, Starr really doesn’t want to see happen.

Starr seems convinced by Jesse’s conversion and takes him to get his soul back and powering up Genesis and they walk out together. But Tulip has listened to much to Cassidy and is really suspicious… she also finally remembers what god told her. “Kill those Sonsabitches”. This is disturbingly unspecific advice to give everyone. Especially Tulip

Tulip attacks - shooting many of the Grail while Starr runs with Jesse’s soul. Jesse isn’t thrilled and Tulip wallows in some self worth issues inherited from her father

Grandma is also pissed at Jesse and resorts to using magic to strangle him from a distance as a lesson. We’re clear she knows he’s trying to escape and equally thinks he won’t manage it. Oh such fun family interactions.

Cassidy is also shot in the battle... which isn’t exactly much of a problem to him

And Jesse seems to resign himself to his grandma’s will by opening the Tombs… some ominous basements with at least one man chained within - mutilated and begging to be freed. Jesse says he can’t… and he starts cleaning up