A Discovery of Witches: Season 1, Episode 8 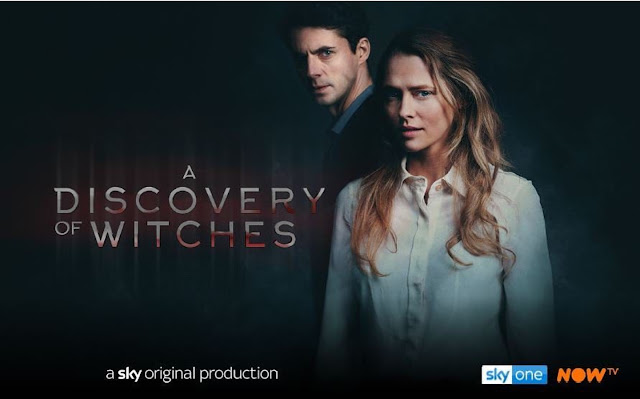 The final episode of A Discovery of Witches and I am immensely frustrated. Oh, British TV shows, every part of my soul wants to say how inherently superior you are to American shows - but no we have to have these teeny tiny seasons where absolutely nothing gets space or time to be developed!

It’s something American shows TEND to do better (I say “tend” because they also tend to have marathon seasons of So. Much. Filler).

So we reach this last episode with Juliette the disposable and pointless threatening Diana and dramatically declaring she was created by Gerbert expressly to seduce Matthew and Matthew just rejected her and so she’s just been his whipping girl and servant and now is totally jealous of Diana.

And oh dear gods this character. We will revisit this in the conclusion when I have had a drink and can handle the level of cringe here. The cringe is high

Juliette decides to stab Matthew after making him kiss Diana because, well, she’s not a character, she’s a caricature of woman scorned. Matthew ends up bleeding and dying and Diana pulls another magical power out of her back of Deus Ex tricks and shoots Juliette with a bow made of fire. Bye Juliette.

Oh and that “fire was the only element she doesn’t have” of course she has it?

She worries about poor Matthew who is now dying and she prays and begs saying she’ll do anything to get him back. Thankfully the goddess is all into that, warns her there’ll be a price but Diana’s all ANYTHING FOR HIM and feeds him her blood and lets him bite her.

Y’know if blood was what he needed they had 2 other witches, 2 vampires and I’m sure a passing bunny or something to help spread the load. Someone could even sponge up Juliette.

Which of course he doesn't do because that whole “craving” thing just means nothing and was kind of thrown in the first couple of episodes for some Twilight-esque shout outs but then never actually went anywhere. Diana does realise he does crave her and has been resisting tearing out her spleen and sucking on it every minute they’re together

She thinks this is sweet and romantic

There’s something badly wrong with this woman. She needs help. She needs an intervention.

Oh, hey, Diana just totally had a convo with the goddess and she doesn’t talk about it or mention it to anyone and it’s just no big thing. I’m just here, chilling with deity, don’t mind me, certainly not worth mentioning! Maybe in like 3 seasons she’ll mention in passing she has a hotline to deity whenever it’s narratively convenient.

Thankfully Marcus is a doctor so sets her up with a transfusion and she’s all good to go. Miriam drools over her impressive witchy power and praises her death wish in letting Matthew bite her when she didn’t know whether Matthew would stop drinking. Oh Miriam, she plays with his blood lust for sport! You’re expecting her to do things like an adult human capable of making good decisions.

They are worried that if Juliette could find them that anyone can so there’s nowhere they can hide. Guys, you’re staying with Diana’s aunts in the house where she grew up. Of course Juliette found you. Peter Knoxx has literally visited this location and seen Diana there. This does not count as hiding. You’ve probably still got the geotags on your phones.

They decide their only possible choice is to flee back in time - hey I knew her shiny power would become relevant. This involves training. Ish. Hey they try but it’s more derailed by “oh love Matthew solves everything”. To help the House just throws them a poppet and an earring - the earring is one Ysabeu lost hundreds of years ago that the house now has. Because it’s a Deus Ex House.

So they plan to flee back in time somewhere where Diana can learn her magic. Which actually makes a lot more sense and is a reasonable plan (even if resorting to time travel is a little extreme) since Diana already has like ALL THE POWER so if she can use it she can just Deus Ex everyone to death.

We then reach what I think is by far the best part of the episode - the big happy household. Nathanial and Sophie arrive with Hamish which means we now have 3 of each Creature: 3 witches, 3 vampires and 3 demons. And we get them all having dinner together and Miriam wants to do more testing on Diana and is there to help Sophie, especially when her odd witch heritage is revealed. Marcus and Nathaniel become really friendly and are kind of fun together and Emma and Sarah rally round Sophie like surrogate mothers and it’s all really fun

They refer to it as a Shadow Congregation. And it works so well - when we see the Congregation with their threats and scheming and plotting and outright hatred and prejudice - and then we see this Congregation that is building friendships and actually likes each other

See, a Discovery of Witches that had a lot more of this and a lot less of Diana’s terrible death wish would have been nice to watch. It would also have actually involved the minority characters more. Or at all.

And that statue Sophie has turns out to be one of Matthew’s lost chess pieces - another item he and Diana need to time travel to the distant past for sanctuary -which continues to be the big plan while everyone else - including Emily and Sarah - go to Ysabeau’s castle in France.

But, before he goes, Matthew hands over control of the Knights of Random Plot Device to Marcus since there's a rule that the Knights must be kept away from Congregation members, can only be held by his family and Miriam doesn't exist.

The Congregation is not a happy fun place. Knowing Satu is around and sort of getting her powers back, Baldwin plans to accuse her of kidnapping Diana from his lands which is a no-no so she should step down

But now Gerbert and Knoxx, who kind of hate each other, have decided to ally with each other in the name of bringing down Baldwin. The Convention was created by Phillipe, Matthew’s dad, and one of the rules is one of the vampires must be from the Clairemont family. But with Baldwin and Matthew gone then Marcus will hold his seat and no-one’s scared of Marcus

So when Badlwin makes a good case against Satu and demand she step down, Knox launches his coup and accuses Baldwin of betraying the Congregation since he is hiding Diana et al. Baldwin denies all - but Gerbert insists on having him beheaded and burned to death

Yes, Baldwin, as a lawyer I share your annoyance that thousand year old legal systems have these ridiculous antiquated laws. Admitted he’s probably more irritated by it given the whole beheading and burning thing.

The Demons intervene and demand chance to debate this - and a vote. They do that and the final vote is:

Yes Dominico votes for Baldwin. Why? I think by this point he’s just doing things for shits and giggles and so many people owe him favours now. Already when he worked with Gerbert it’s clear he’s been receiving “favours”.

Baldwin now owes Dominico and the demons a favour. Or we can burn the whole congregation down

Baldwin cannot stop the Congregation launching their own forces to pick up Diana and Matthew, just as they plan to travel in time...
So, returning to my original opening complaint - this is the season finale and it was just getting goo-... err… tolerable. Honestly, I don’t like Matthew or Diana. I find them blander than unseasoned mash potatoes on rice crackers. I find their romance ridiculously accelerated, going from “creepy terrifying stalker” to “let us defy all laws to be together forever!” in a ridiculously short period of time. I also loathe how their romance has destroyed the plot. The Congregation’s nefarious actions? Nah, Romance. Diana’s special powers? Romance. The book of fecking LIFE which was supposed to be SO IMPORTANT barely merits a footnote by episode 8. It’s only there so the Congregation can pretend to give a damn about these two humping. Hey, remember when Matthew was worried about the extinction of all creatures? How demons were suffering from mental illness, witches were less powerful and vampires couldn’t create more? Remember that? Because we forgot ALL OF THAT by about episode 4. Instead we’re riding this Star Crossed Lover trope to death

And the decisions they make continue to frustrate me no end!

This episode added to the frustration by showing what could have been with the Shadow Congregation while emphasising just how many of these characters have been undeveloped and poorly used. Agatha, the demon councillor, commands every scene she’s in - and her family and their struggle to be recognised by the other Creatures as equals (along with Hamish and Nathaniel and what Sophie means) would be very compelling storyline. But it’s so underused that we still don’t know WHAT DEMONS ARE?! I mean I’m guessing they’re not creatures from hell or fallen angels because that would probably get a bit more respect? And do they have any kind of supernatural powers at all? I still think they’re kind of humans who found out about the supernatural and everyone just convinced them they’re supernatural because it was the easiest way to keep their secret. Honestly if you have a series about three different supernatural races and one of them is indistinguishable from humans there’s an issue with development. Hey, for that matter - who's the third witch on the Congregation? Who are the other two demons?

Diana’s aunts - y’know the ones who could be a source of guidance and advice and magic considering how few witches they can trust, don’t really appear in any meaningful way until the second to last episode. I mean, ye gods, we could have had so much more of them than Diana and Matthew’s painful romance. And Miriam? Am I the only one who forgets she exists most of the time?

And Juliette. Oh my gods, Juliette. This is a Black woman who was CREATED to seduce a man, existed entirely for that purpose, was rejected by him and became completely enslaved and abused by another man… only for yet another man to manipulate her obsession to her inevitable death at the hands of a white woman who succeeded where she failed. I… why? Why is this character here? Whyyyyy? It’s just awful in every single way it’s possible to be awful. I rename this character Cringe.


This show has all the ingredients to create something great... but it left all the best ingredients out, overused some bland, dull elements far too much and then undercooked all of it. The potential is there... and it's still there... but my hope is low...