Venom in the Veins (Elemental Assassin 17), by Jennifer Estep 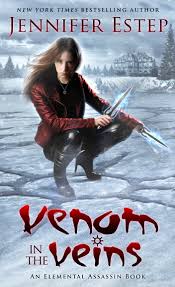 Gin fears someone is gunning for her friend, and chairman of Ashland’s biggest bank. But Gin, the assassin known as The Spider, doesn’t sit back when someone she cares about is under threat.

But when she learns the mysterious and deadly Circle are involved, she wonders why - why would they be invested in this? Gin needs to know if she’ll ever hopes to take on the force that killed her mother


Of course, as an assassin, Gin has left some orphans in her own wake… and when confronted by one of those Gin has to face that the pain she lives with every day is also something she has inflicted on someone else

Especially since Gin is supposed to be so powerful and so scary and lethal. Can we see
that? I mean, all her magic, all her skill with knives - there was never even any real reason why the big bad in this book would be that big or bad. She has no great super powers or great training - we could have had an enemy

I don’t think it even fit with this book. The whole conflict of the book up until the inevitable kidnapping, was finding out what the enemy wanted and protecting Mosely from her attacks. It was even about letting the big bad show her hand and trying to discover what she wanted what she was doing and why the Ominous Circle was involved. And that was interesting and really different- because for most of this book we were in that investigation phase and there was never any real question of whether Gin COULD kill the bad guy, so much as whether she’d have to. Or, perhaps, whether the enemy would give Gin a reason, or an excuse, to do so. Because Gin isn’t a bad person - and there’s a whole interesting conflict there on whether Gin, the assassin, can hunt someone down because she’s PRETTY SURE the bad person is bad, even if she’s not entirely certain. Because she is the good guy and she can’t just kill people because she thinks they’re bad. Apart from anything else she’ll be very very busy in Ashland

And this all worked - and most of the book is interesting and even a little different because of that. Why is the Circle involved. What does the big bad want, why are they supported and can Gin protect Mosely and continue her ongoing investigation into the big bads that ultimately killed her mother. Ongoing with that and Gin’s personal issues these worked really well together We didn’t need another “aargh, I’m captured and tortured” moment or Gin nearly dying to take down her target AGAIN.


I do like Gin’s memories, I like her flashbacks - hey and here’s a way to get some torture porn scenes in if you really must, because it makes sense that only the most traumatic and awful of her past experiences would be the ones that stayed with her. I love how these shaped her and we can see what she endured and how she used to work as well as get a shape for how Ashland has always been. I also like the emotional conflict of this book, of Gin who is defined by the tragic loss of her mother at Mab’s hands, who lives forever with the memory of that murder and whose overwhelming arc is to find her mother’s killer for vengeance. Which makes her confronting the family members of one of the many many many people she’s killed all the more poignant - because this is her. And there must be so many other people like this, other people living in the shadow of the grief left by the Spider’s killing


There is an odd moment in this book where they’re all looking for some hidden secret mcguffin and while looking she finds an orb of weird magic and a mysterious blue book and… kind of ignores them? Like “oh we’re looking for something strange, I shall check this later” and then… they never check it? But stand there and look frustrated and keep looking while the Strange Thing of Strangeness is right there.


The book continues to have the things I love about this series - the strong connection between Gin and her friends (albeit not quite as emphasised this book? Gin seems to do a bit more lone wolfing), the connection with her family and chosen associates. As well as occasional scenes of food that genuinely make me hungry reading them and oh yes do I appreciate any writer who can whet my taste buds.

Inclusionwise… we have some diversity in Gin’s wider circle but this book focused even less on that wider circle than previous books and the most important part of Gin’s circle (Bria, Owen, Finn - even Sophia and Jojo) are less well developed than the POC and LGBTQ people (Sylvio and Xaviar). I like that we’re finally acknowledging Silvio’s sexuality rather than going books and not seeing any indication of it. But both characters are very minor side characters in the overall story and even more so in this book. Silvio likes sugar and is a good PA for Gin. And even that is more than we know about Xavier


I do love this series - it’s always one I pick up again and again, happily, and I like how it has evolved as Ashland has changed, Gin’s place in it has changed as has her own emotional growth and conflict. I love her ties to her friends and family, that she has women in her life she values, and her overwhelming loyalty to those she cares about. But there are some really narrow patterns that the books keep on falling into which we really need to break out of a little. I’m really tired of the kidnapped + tortured scene that happens so often