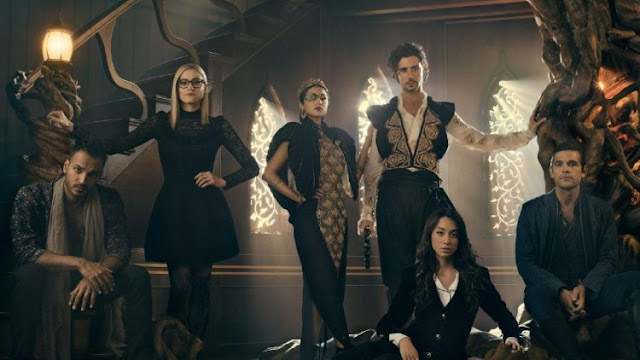 The gang is gathered facing the Elliot monster who is merrily deciding how to kill them in a way which will cause the most suffering.


But downstairs, Margo arrives and runs into Marina. Now Marina is running away because her god-detecting wards have done a collective Oh-fuck and since an alternate version of her (time lines are so confusing) got brutally murdered by a god she’d rather flee for the hills. But she does have a trap for a god - ambrosia that will get them super high and distracted - she tells this to Margo


Margo joins her friend, sets up the trap - and doesn’t use it. Instead trading the location of Bacchus and the means to incapacitate him in exchange for all their friend’s lives. The Monster may hate them but he really really really hates the gods so much more


Josh isn’t thrilled with this plan being a good friend of Bacchus - but Margo is nothing if not ruthless. He thinks she should have used the trap on The Monster but Margo isn’t a fool - the last time they used a god killing thing (a bullet) on the Monster, it was immune and they just killed the host. And since his current host is Elliot, Margo is not happy with that.


They’re transported magically to Fillory and Josh’s job is to poison Bacchus. Bacchus lays on ALL THE GUILT on his best friend. Josh can’t do it but he runs straight into Margo who a) nicely flips the sexism of “pussy” and b) shows her extreme ruthlessness and plans to murder the whole party if he doesn’t get on side… he does


Bacchus is poisoned.... And fed to the Beast. We get some nice exposition with the Beast telling us that he came from the same parents as the gods, that he has his “kind” were trapped together and the Beast ate them all. Hence why he’s called a monster. He knows the gods took something from him but doesn’t know what it is… but he wants it back. Bacchus can’t give it back and, while desperately begging for him to pick any other gods… the Monster slices him open and pulls out a glowy magic red heart


A heart that, to Margo’s fairy eyes, glows like the sun

Julia meanwhile meets with Henry who is just such a glorious wreck with his hidden stash of booze, confronting him about both putting a target on her gang and, at the same time, playing too safe when facing the Library and the McAllisters, compromising too easily. And I think she’s not wrong? But after last episode when we brutally saw Henry’s devastating self-doubt and hate it’s clear that Henry maybe doesn’t have the self-confidence to go all in and trust to his abilities - which is kind of what Quentin, Julia etc all did. Especially this episode. This episode pretty much sums up their entire policy of charging in and trusting that they can handle it. And Julia is even more inclined now - the reason she kept coming back to life last episode? She’s a god. Oh she lost her god powers, but there are still perks


So with Margo and Josh away, that leaves the rest to figure out how to survive. So the McAllisters (the former faerie slavers) are credited with bringing magic back - and handing it to the Library. The McAllisters have now put a huge bounty on the gangs’ lives. And, of course, Marina, not being a super nice person, intends to collect on this. Which is why she tried to bring the illusion down in the first place


Quentin steps in an insists on paying her off - with Deweys. Deweys are coins from the Library - magic credit. The Library gives a small amount of background magic to everyone - but if you want to do a bit more then you need to get some more magic from the Library. And the library has a whole set of coinage they dish out for that - the biggest is the Dewey.


Quentin is sure they’ll be able to earn a lot - because they’ll figure it out. They always do. And this is where we see the vast difference between him and Henry. Henry, after 50 time lines of horror and disaster, he’s not taking risks and doesn’t believe things will work out. While Quentin, perhaps rather… oddly given all the givens… has decided to be the eternal optimist. Honestly I think I didn’t give enough credit to how the last episode really ripped the lid off Henry and what he’s had to live with


So how to get a lot of Deweys. Well the McAllisters did well out of their deal and now all have “Black cards” basically super magical credit cards for infinite magic. After briefly considering and discarding stealing one (Penny points out that stolen cards get reported and cancelled) they settle on a forger - one Penny knows (he’s from an alternate time line but this time line’s Penny, who is dead, also knows the same guy. Did I mention that time lines are confusing?).


The forger lays out what he needs, which is a briefly stolen card (which Penny and Kady get through pick pocketing - and also have a nice moment where Kady suggests just murdering Marina while Penny points out everyone in his time line died horribly and he came to this one to get away from that) and a Dewey of their own for the magic… which they get through gambling using Quentin.


And I love this card game. A Game where you basically just draw cards and whoever had the higher card wins - but the skill is in who can use magic to cheat the most. This is such an utterly awesome concept and I applaud, I really do. Frankie the forger points out the skill to this game is also in skillful magic since some wizards are clumsy and need to use a lot of the limited supply of magic out there to cast the same effect a skilled wizard can do with less.


Quentin buys into the game by offering Penny’s Traveller services (which Penny’s not a fan of) and has to win three matches - and his confidence seems well founded when he wins the first two, reminding us that after 3 seasons of magical shenanigans, our team of heroes are actually pretty good at this magic stuff. The third game he nearly loses though...until he casts a showy effect that uses all the magic in the room… and then he sneaks a card from his ankle. Mundane cheating in a magicaless room - very crafty and I like it - I like that sometimes the answer is not magic


Now they have the forgery - but there’s a catch. Frankie’s forgeries work because he is a master of luck magic (he uses so much he just moves with permanent good luck). They are accepted because the carrier is so lucky they’re not really challenged. Except to get all that good luck, the bad luck has to go somewhere else - and he has a teddybear of bad luck someone has to hold while those with the forgery do their thing


Julia, always willing to sacrifice herself, offers because of her god immunity. But that god immunity also stops her being cursed with bad luck. So while Kady and Penny withdraw several Deweys from the library with a series of incredible good luck, Quentin nearly dies


And receives a phone call from his mother… which may be about his dying father. Quentin cannot bring himself to answer it.


They can now pay off Marina - but Kady hasn’t entirely given up revenge and slips her a bad luck coin with the others while she enjoys the good luck. And with the rest of the magic they now plan a cloaking spell to protect themselves from the McAllister’s vengeance...


And Quentin and Julia have a moment… Quentin feeling down wonders if all they’ve given up is really worth it to bring magic back. Despite everything, Julia says yes, even losing her godhood. While Quentin… facing his father dying because of it, can’t agree


I wonder if Quentin is heading down the Alice route… Please I hope not, this show has really come into its own, no recycled storylines!


Because they’re still around we need to drop in on Alice and St Nick - who finally go with their escape plan. But Alice cannot leave without stealing the “Life books” of her and her friends (otherwise the Librarians can just read their books and track them). She finds Nick’s and her’s but not her friends….while Nick escapes she remains in the Library looking for the books. And is caught by someone.


I do like that the storylines are finally drawing together