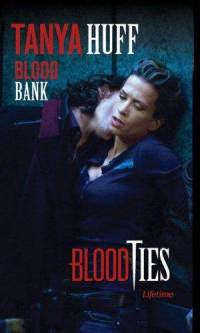 This review is difficult for me. Blood Bank is a collection of short stories by Tanya Huff that involve the characters and world of the Victory Nelson series. The problem I have in reviewing it is I, frankly, don't like short stories. As soon as I realised what it was, I admit I was disappointed. I like epic series with huge meta-plot and endlessly developing themes and stories and plotting. Little vignettes of people's lives just generally don't do it for me. So, I'm going to try and work past my natural disinclination to do this book justice


I would say these are a series of delightful little stories that just add a lot of little bits of flavour into the world. They each add depth, they each add a new angle and they all hint at the breadth of the world as well as giving little bits of insight into things like Henry's past and Vicki's relationship with Mike.

But, and I admit this could all be personal taste, it all felt a little empty. It added a little flesh to the bones but not much grew – there was no development, no advancing of the plot or story, no growth. It was interesting, it was a series of amusing insights and curious stories. But after 5 books of the plot advancing and going forwards it felt a little like someone had pushed the pause button and we were having an intermission. Even if the intermission is interesting – seeing how Vicki is settling in with her new circumstances, seeing more flashes from Henry's past – it's still an intermission.

It did expand the world. There is a lot of weird and wonderful out there – though the big bugs and the Christmas story were... perhaps a little more out there and twee than amused me. But the world did grow and it was very imaginative creative and it was original in a genre where very little is. And it was a good story – it was interesting, it was fun, it amused me and I enjoyed reading it. It was never a difficult read.

There are a few offish elements. We have a brief visit of a Romani fortune teller. As far as such portrayals go, it's not awful – but one of these days I'd love to read a book with a Romani in it who doesn't have a bloody clue what's going to happen tomorrow – or whether you're going to meet a stranger (tall, dark or otherwise). It's a bit done. I will say, at least, that Tanya Huff has done some research and it's not all Madame Ludmilla staring into her crystal ball while wearing lots of shawls.

There was an alleged/possible First Nations beastie in a lake, but it would have been nice to have a First Nations person involved.

We see a few more of Henry's past romantic adventures – his deep passionate love with women past, and his casual snacking on men. His paternalistic contempt for Tony was lesser in this book – largely because Tony's presence was less. In some ways it avoided some of the issues I have with previous books simply by omission.

It was still heavily erased when it comes to POC for a book set in such a diverse city as Toronto, where much of the story takes place


On the whole it's a good book, but perhaps lacking in big meaty substance. And part of that, I admit, is my dislike of short stories. But I wanted a steak dinner, I got a sandwich. It's a nice sandwich, it's tasty, it's well made and I like it – but still the previous books were steak, I picked this up expecting steak – I want my steak *pout*