Thoughts on Lauren Dane's Goddess With a Blade 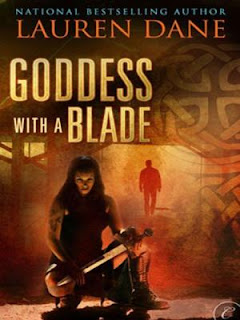 This is the first book that I have read by Lauren Dane and I must say that despite several problems, I really enjoyed it and look forward to reading the rest of the books in this series.  Though Lauren Dane is an Australian author this book is set in Las Vegas.  One of the main issues with this book is that Dane has constructed Las Vegas as a Whitetopia.  I wonder if this stems from unfamiliarity with the area, or is just another example of people of colour being erased? Las Vegas is a city where anything goes and Dane does acknowledge this in her writing and yet there isn't a single person of colour in the book.  Also erased are GLBT people. Right. No GLBT people in Vegas of all places.  It makes me wonder if their are LGBT in San Francisco.

Once again we have a female protagonist whose job it is to kill vampires.  In this case, Rowan Summerwaite is infused with a Goddess who gives her the power to slay vampires who murder humans.  Rowan is about as mannerly as a bull in a china shop, speaking in the most vulgar tones at inappropriate moments, as well as threatening violence at the drop of a hat. She is arrogant and self righteous to a fault.  Falling in line with other tropes popular to the genre, Rowan is also an orphan.  Heaven forbid one of these books have a protagonist with living, loving parents.  In Rowan's case her parents were murdered by her vampire step father Theo, when she was just a child.  Her relationship with Theo who is considered The First amongst the vampires is complicated and marred with abuse but they clearly love each other.  This makes me uncomfortable because even though Theo represents the only father she has ever known, I cannot in good conscience understand maintaining a relationship with the person that killed your parents and left permanent marks on your body.

What's a vampire story without a love interest?  I don't know if I would call her relationship with The Scion of Las Vegas Clive a love relationship because it seems to be about fucking every time they are near each other and sexual tension.  In fact, the first time they have sex, I was absolutely shocked because were I in his position I would be more tempted to slap her than kiss her.  Though the sexual tension at times feels quite contrived, I will say that the dialogue between them at times can be amusing.  There is a lot of sex in the book, but at least it does not pretend to be anything other than the vanilla sex it is, which is more than I can say for the author Anya Bast.  At times it felt like filler but was never truly boring.

My last issue with the book has to do with the sexist language employed.  Rowan's favourite insult is pussy and I for one am tired of female genitalia being used as a put down.  I understand that she is meant to be powerful but calling the male vampires around her pussy does not speak of empowerment and in fact infers an internalization of the sexism often aimed at women.  This is ironic because she makes a point of stating that people underestimate her precisely because she does not have a penis.  Speaking of penis in one of the many sex scenes, Clive says, "it occurs to me you have not yet had my cock in your mouth."  I can understand wanting to shut Rowan up but doing so by shoving a dick down her throat was just a touch to sexist to me.

As for the fails, though they are numerous, they really weren't any worse than other books in the genre.  Because Dane had an interesting story to tell, they did not overwhelm the plot or make it difficult to read.  As a person interested in social justice however, it is important to be aware of the isms that a story perpetuates even if you love the plot that they are wrapped into.  I am really interested to see what Dane does with Rowan, and if she can manage to step away from some of the isms that she has included, the story is fast paced enough, and interesting enough to really turn into something good.  Fair warning though, Anita Blake started off this way before LKH lost her damn mind, so this really could go either way.