Thoughts on Season 6 of Buffy The Vampire Slayer 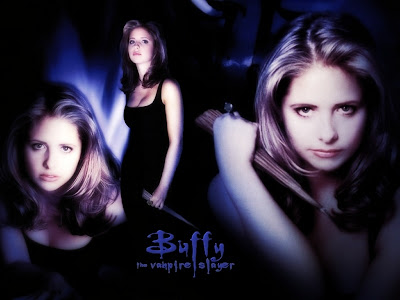 When I first started watching Buffy, fans promised me that I would adore the series given my love for urban fantasy.  The first five seasons were hard for me to watch and quite honestly if I didn't have a project which required me to watch Buffy, I would have stopped.  Season 6 however was a game changer.  Buffy left behind much of the teen angst with the exception of Dawn (can we drop a house on her?) and was much darker and far more adult.
Since season five, I desperately wanted Spike and Buffy to get together and that desire was met by an abusive relationship that culminated in rape. I know that some fans don't see the abuse in the relationship prior to the rape, and that is why I think a discussion is absolutely necessary.  Even though Buffy was more than capable of defending herself against Spike's physical assaults against her, he continually hit her to provoke sex.  He prayed upon her vulnerabilities using shame, and then systematically attempted to isolate her from her friends.  These are the hallmarks of abuse and should never be seen as some sort of romantic interlude.
As much as season six was adult, it was also more problematic.  After waiting for Tara and Willow to finally kiss and share the same sort of romantic screen time as heterosexual couples, viewers were rewarded with watching them break up due to Willow's abuse of magic (more on that later) and finally Tara's death.  Really Whedon?  It's bad enough that Tara died, but to kill her after she and Willow had sex, makes it seem as though death is the penalty for same sex love. How many times have we seen this trope carried out in the media?  After witnessing Tara's death, I don't understand how this show could be seen in any way as a positive representation of the GLBT community.  I know that some will defend Tara's death behind Whedon's nasty habit of breaking up couples, but when it comes to gay/lesbian relationships, the fact remains that violent death is often how they are ended in the media. Tara's death is an absolute reflection of lesbophobia and can be seen as nothing else.
Season six also saw the rise of the slut shaming Xander.  From the beginning, Xander was not a character I took seriously, but this season made me loathe him in a way I didn't believe was possible.  As you remember in season two, Xander cast a spell to make him irresistible to Cassandra, but it back fired and made all the women of Sunnydale become violently attracted to him.  I suppose I should not have been surprised that this same character would have no problem slut shaming both Anya and Buffy, when he discovered that they had slept with Spike.  In Anya's case, the sex occurred because she wanted to be comforted, because his trifling behind left her at the altar. She wanted solace, she wanted to feel beautiful and wanted, but instead of realizing that he had no right to sit in judgement of her, Xander repeatedly slut shamed her.  His shaming of Buffy had even less grounding, since they had no romantic relationship, and even when she told him that her private life is her business, he made it clear that he was always privy to it in the past and expected to be informed of every sexual dalliance that she participated.  Xander behaved as though these two women took his body to their business and it speaks loudly of the ownership men often take of women's bodies.  It was paternalistic and it was absolutely sexist, but then this show is supposedly a positive commentary on gender right?
By the end of season 6, my frustration with the ableism on Buffy reached an absolute zenith.  Is Buffy even capable of saying a sentence without the word lame?  As a person who has a physical disability, I found the language to rise to the level of an assault, because it constituted verbal violence.  Not to be outdone by Buffy, Xander used the word retarded several times as a slur. If you didn't get the message that Buffy the Vampire Slayer is disabliest -- this season also included an episode entitled, Normal Again, in which Buffy was in an institution, because she apparently could not tell the difference between reality and her supposed mental illness.  Talk about a bad analogy.  There was absolutely no reason for this episode, other than to stick it to people with disabilities. It framed Buffy as damaged and this absolutely how people who are neurologically atypical are viewed by society. Between the constant reference to split personalities throughout the seasons thus far, the disableist language and institutionalizing Buffy, as far as disability rights are concerned, Whedon has a lot to learn.
The other problematic analogy this season with juxtaposition of Willow's magic addiction and drug addiction. I understand that urban fantasy often uses analogies to make social commentary, as can be seen in True Blood, with its attempt to focus on GLBT rights, through the supposed oppression of vampires, but just as in True Blood, Willow is a being of immense power.  That this power is being used as a sickness, takes away from the absolute vulnerability of someone who is addicted to drugs.  A fake illness should never be used to mimic a real one, because it erases those who are suffering, and makes it seem as though the issue is not really as serious as it is.

Finally, I suppose I should include some levity by talking about the musical episode.  I cannot say that I was a fan, and with the exception of the actor who played Giles, not a single one of them should ever and I do mean ever, sing in public again.  I know that this episode is a die hard fav of many Wheonisters, but seriously, it makes me want to set Simon Cowell loose on the lot of them.

I have one more season to go.  I have enjoyed some of it, hated quite a bit of it and laughed occasionally.  When it is done, I will be happy to have watched all seven seasons, because I think that something this important to a genre that I adore should not be missed.  I don't know that I would recommend it to others, but I will say that there is more to the show than the teenage angst which filled seasons 1-4.  When urban fantasy is done right, it is out of the world amazing, but unfortunately for me, Buffy the Vampire Slayer is filled with far too many fails to be as enjoyable as it could be.
Posted by Renee at 9:00 AM