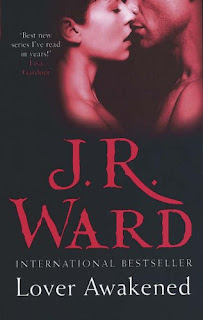 And we have another adventure of the Black Dagger Dudebros in their continued quest to have lots of bar fights, have lots of sex and occasionally killing a lesser if one waves at them. Oh wait, I mean nobly and valourously defending the vampire species from the depredations of the soulless Lessers of the Lessening Society
This time it's Zsadist's turn to find his one true love. After escaping the clutch of the Lessers, Bella seeks refuge with the Brotherhood, especially with Zsadist who she feels safe with and feels compelled to seek his presence.
Zsadist must face these entirely new feelings he has. After years of abuse as a blood and sex slave, he must learn that a woman's touch does not bring pain – and find something within him that isn't hard and cruel and tortured. Bella restores his hope, hope that both he and his twin Phury had forgotten long ago.
But the lesser, O is obsessed with Bella, and refuses to let her go and will fight even his fellow lessers to get to her
There's also a lot of other stuff happening with the lessers, but I don't think you need to pay much attention to that – after all, the Black Dagger Dudebros don't.

I am reminded again and again just how ineffective the Black Dagger Dudebros are. Seriously why do the lessers even bother with them? They tend to just hang around bars and hope they trip over a lesser to kill! The only reason vampire kind isn't extinct by now is the lessers' constant infighting and backstabbing.
I'm also bemused by Phury. Yes he's sad that his twin's messed up. I get it – but his twin's issues drive Phury to take a vow of celibacy, take drugs and consider taking harder drugs and generally act terribly terribly tortured. Why? Why does this man have no independent existence outside his brother?
(In fact I have to risk a spoiler just to GAPE at that whole plot line. A woman is kidnapped, to save her Zsadist accedes to the kidnappers demand to go ENTIRELY alone, to handcuff himself and be murdered. But no, Phury, says NO THIS WILL NOT BE! (actually I say as well, but only because the entire idea is ridiculous. Apart from anything else the Brotherhood represent the ONLY 6 warriors the entire species has to protect themselves from extinction against an army that wants to slaughter every last one of them. You do not offer one of those 6 as a sacrificial lamb for a civilian. If it comes to it, you just say “sorry lady, sucks to be you. We'll kill the bastard who did that to you”). And he disguises himself as Zsadist and sacrifices HIMSELF to certain death to save his twin. The Brotherhood doesn't have a braincell between them.
And what the hell was with killing Welsie? It did nothing for the plot to kill her – except to shovel another shed of angst. What, was Zsadist finally dealing with his issues just reduced the angst levels to critical levels and now we need more? It's not like it even happened in an epic way – it was a convoluted chance encounter that was just shoehorned in. It felt unnecessary, gratuitous and also kind of irritating – she was one of the more decent characters in the books
Add in that the Black Dagger Neckbeards are especially neckbeardy in this one. Not only do they continue their constant homophobic and sexist language all the freaking time, but they take it to the next level. Now we have freak outs over being called gay and *gasp* actual acknowledgement that same-sex attraction among men exists – yes there are gay/bi men. Who are rapists... Yeah. Oh and you can totally talk about the woman raping the man... but a man raping a man? NOOO, that is beyond shame! I could probably deal better with this if it weren't for the constant homophobic language and the sheer horror that Phury might be gay (he isn't), but combined? Yeah I'm going with no
Violence against women continues to be used as a shorthand for evil, especially as O takes over and goes full on shaming, misogynist stalking of Bella. We also learn that not only are the Black Dagger Brotherhood pretty misogynist but vampire society is as well. Rehvenge, Bella's brother wants to “keep Bella safe” by having the king issue an order of sehclusion over Bella, effectively making her her brother's property – she can't go out without consulting him, she can't meet anyone without them going through Rehvenge first
No review of one of these books would be complete without mocking the names. Only one new name this time – Phury and Zsadist's father was called Ahgony. Yes, I'm not kidding, I wish I was. But we do have 4 new words added to the Old Vampire Language! Cohntest, Ahvenge, Sehclusion and Ghardian. Yes... some writers create whole new languages for their worlds. And some have glued down the “h” key on their keyboard. Still, I am Cohnfidhent I cahn spheak thhe vhamphire lhanghuage.
Y'know what? The plot in this – with Zsadist and Bella both being survivors and coming to terms with what happened to them was actually pretty good. It wasn't exactly urban fantasy rockingness, but it was sensative, throughtful and there was a lot there that really struck a chord with me – in a way that almost made me uncomfortable so I have to say it was powerfully done. There was more reason to focus on the relationship, the relationship had more substance to it and more issues surrounding it and just greater depth. At least until the end. I almost, almost want to give it a higher rating than the previous books on the strength of that but there's so much more in this book that annoyed me that I just can't. One step forwards, one giant leap back.