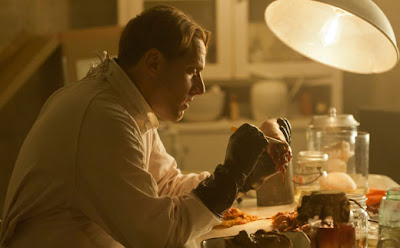 This piece originally appeared at What Tami Said
Yesterday, Feministe published a post on the irresponsible way The Walking Dead treated "the morning after pill" in a recent episode:

So you’ve got this storyline where Lori Grimes is unexpectedly pregnant and despairing over whether to bring a child into a filthy, chaotic, hopeless, joyless, post-zombie-apocalyptic hellworld. You know what? That’s awesome. Seriously, that’s an awesome storyline. I can totally see a person struggling with that under those circumstances, and there’s a ton you can do with that subplot. Good call, show.
So you give Glenn a pony and send him into town (even though y’all do have an actual car, but that’s another complaint for another post) to hit up the pharmacy for…
… a big ol’ handful of abortion pills.
Oh, show.
1. A big packet labeled “Morning After Pill” is like a white soda can labeled “Cola.”
That’s… just not what they look like. Plan B is actually available over the counter now, if you wanted to pick up a few just to see what they look like, in case you were interested in, like, accuracy, or whatever. You also might be surprised to learn they look nothing like Tylenol PM.
2. The morning-after pill doesn’t cause abortions.
Even if you take them by the heaping Tylenol handful, Lori. All that will do is make you feel really queasy, and then you’re sick and pregnant and living in a post-zombie-apocalyptic hellworld and your hair is really flat. Read more...

The writers of The Walking Dead aren't the only ones who could use a trip back to sex ed class. Though, I can't decide whether American Horror Story's treatment of abortion is ignorant, lazy or evil. The show, Ryan Murphy and Brad Falchuk's weekly camp homage to iconic horror, follows the dysfunctional Harmon family, recently relocated to the West Coast and stuck in a spirit-infested home with a long history of sordid sex and murder.

The Murder House, as the Harmon's new home is called by locals, was built in 1922 by the inept,drug-addled Dr. Charles Montgomery, who is convinced by his money-hungry wife to take a break from his nefarious Dr. Moreau-like experiments and begin earning extra cash performing abortions for unfortunate show girls. Eventually, the angry boyfriend of a patient kidnaps Montgomery's baby Lindbergh-style, returning him dead, his body cut into pieces. The now quite mad doctor stitches the child back together like one of his previous ghoulish experiments, reanimating him into an unholy evil thing that may still reside in Murder House in corporeal or spirit form.

As horror stories go, a physician who turns his murdered son into a monster is foundation enough to spark a decades-long curse. But I am convinced that the show wants the audience to think some of the house's murderousness comes from the fact that its original owner was performing abortions. The show runners prod the audience to associate abortion with the dark, unholy and wrong.

Through its narrative, American Horror Story disturbingly co-signs several conservative and anti-choice messages:
Clearly Dr. Montgomery and his wife were not running a caring medical facility. Instead, they were enriching themselves by preying on young women with unwanted pregnancies--women who had no legal options for the termination for their pregnancies nor access to the birth control methods we take for granted today. But I think the revulsion American Horror Story wants us to feel is not about poor reproductive care in the early 20th century, but about the medically-assisted ending of pregnancy, period.

At a time when American women's reproductive rights are under attack, American Horror Story's handling of abortion is the most horrific thing about the show.
Posted by Sparky at 9:00 AM