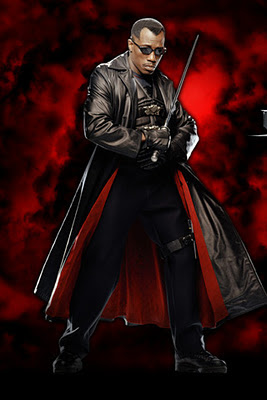 The movie Blade was released in 1998 and is based on the Marvel human/vampire hybrid character.  It stars Wesley, I've never met a Black woman I can respect Snipes as Blade, Kris Kristofferson, Stephen Dorff and N'Bushe Wright as Blade's love interest Karen.
The movie begins on the day of Blade's birth, where we watch as his mother dies giving birth to him.  What we do not know is that Blade is destined to be a hybrid because his mother was bitten by a vampire.  He was raised by Whistler who developed a serum to help him fight his thirst to kill vampires, to keep the human population safe.  Whistler became involved in the fight because a vampire had broken into his home and killed his wife and two daughters.
There are two kinds of vampires, those who are born with the condition and those that are bitten.  This creates a hierarchy between the vampires, with both factions waring for control.Speaking to Deacon Frost about turned vampires Karen says, "Vampires like you aren't a species. You're just infected, a sexually transmitted disease." (1:21 58) Obviously, this statement is problematic, because it plays upon the stigma that those living with HIV/AIDS live with.  It is further troubling that one is better entity because of the position and or privilege that one is born into.  Having this asserted by a woman of colour, who is naturally born without White or male privilege, naturalizes the idea that identity outside of the control of the person is a valid reason to stigmatize, thus normalizing the idea that constructed identity markers are a positive attribute.
One of the things that stands out as far as Blade is concerned, is the fact that we have a Black hero.  Often in urban fantasy, Black characters, when they are shown at all, are relegated to sidekicks.  The movie Blade takes this one step further, by suggesting that Blade is the key to summoning La Magra, the blood god.  Blade's blood is necessary because unlike vampires who are bitten or born, he has all of the strengths, but none of their weaknesses. We have seen the chosen one plot point time and time again Blade is the only movie, that I can think of which places a person of colour into this role.
The female lead in this movie is Dr. Karen Jenson.  This is yet another rarity because women of colour are a rarity in this genre.  It should be noted that while Jenson is the female lead, she is not Blade's love interest.  He saves her after she has been bitten by Quinn.  It is suggested that he saved her because she reminds him of his dead mother. I suppose one could argue that the story does not need a romance; however, typically in these situations, this is exactly what happens.  It almost feels as though a Black female lead was not worth the effort.
I will however give them points for making Karen a true partner.  Over the course of the movie, she shifts from being a victim of vampires, to wielding weapons and defending herself.  When in the end she is kidnapped by the vampires, Blade attempts to save her, but it is Karen who frees him and sacrifices her blood.  I do however feel that it is necessary to point out that though she saves him the fact that it requires her submission to him plays directly into gender roles.  The fact that Blade is a supernatural being is used to obscure the gender dynamics at play.
Blade is nothing if not action packed.  Snipes spends a great deal of time performing the martial arts that he has become famous for.  The blood and gore is ubiquitous. He is very much the alpha male in this film with little time for emotion except of course for his mother.  Blade is more of an action movie than anything else.
In terms of vampire lore, the vamps cannot be out in the sun, they have issues with garlic, need blood to survive and staking them effectively kills them.  The only lore that was left out were religious symbols like crucifixes. If you are looking for lots of action with your vampire, I suppose this is the movie for you because Blade is not subtle or in the least bit nuanced.