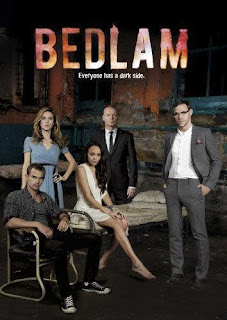 Ryan and Molly are reading the tarot in the much haunted house. Later they'll have a séance, then get out the ouija board. A candle falls over and burns Molly. And yes, Molly is this episodes haunting victim. - and this is a fiery ghost! Sets fires in mirrors, to pictures – definitely a menacing one
Ryan plays den mother and we're getting foreshadows of a relationship between Molly and Ryan. Lots of hints, lots of eye contact and lots of getting close to each other. Molly wants to move in with him elsewhere. She discusses him being gay with Kate but it's largely stereotype laden. They come together in tender caring and concern and love, kiss and spend the night together. Isn't it nice that he found true love with a woman rather than those anonymous hookups in gay bars.
Research points to a man who burned his family to death – including his sister who was the primary target – and his sister's boyfriend. And the sister looks awfully like Molly.
Kate is her normal caring sharing self. Y'know if I'd known at the first episode what I do now, I would totally have been cheering on the watery ghost with the lost bling. Despite her being so wonderful, Jed tells Ryan about the texts he's been getting telling him to save Kate – from number 2439. A number Ryan recognises form his research from a photo of Jed's mum. He goes to that ward but his ghost sight sees nothing. Get some ghost glasses.

Actually, Kate does begin to grow some empathy this episode when it becomes clear how upset Molly is. Wow, she does have a heart, buried in there somewhere. Kate she tries to grill Warren (Evil Dad) about Zoe (who she suspects Warren chopped up and burned in the incinerator) and he rather obviously lies to her. Warren tries to have a heart to heart down memory lane – but Kate wants to know about the hospital. And the truth behind the abuse that happened there. Warren doesn't deny it at least. She also later confronts him with the necklace from the incinerator and pushes him to take it to the police.
Kate continues to dream about the hidden room so she and Jed go with a great big door-opener. Warren tries to stop them but they break it open – but in they go and find the remains of grandad's experiments
We end on a cliffhanger! Molly, upset at Ryan leaving her bed during the night, leaves and is picked up in a white van – as Warren said Zoe was. And Jed is left in the room the grandfather left behind
Series review on the social justice front – well, we had some inclusion which isn't bad for such a small cast – but I'm not entirely happy with what we had.
First Ryan, oh Ryan. He had his own agenda for 5 minutes in 2 episodes (which involved talking to Jed about his brother – that's it) then became a sidekick and servant to Jed. Every character has been seen in bed with a love interest, Ryan got a kiss with his. And anonymous kiss with a nameless guy he met in a bar who had less than 20 seconds screen time. Yeah I'm bitter. While Molly, Kate and Jed had vast chunks of whole episodes dedicated to their love lives. Of course, Molly and Ryan share an emotional and loving kiss and night in bed, however it ended. So, we're clear – when he's with a man it's anonymous hook ups in bars then never ever again. With a woman it's love, affection and caring.
While Molly had her own life and her own agenda, that usually involved helping other people – her friends, her love interests. They were people she sought out and were important to her at least but she was very much an actor for other people.
There's a lot of mental illness sniping but also some good call outs. How it can effect people how it changes people's lives. We had Sadie shouting down Kate's “humour” and Jed contradicting Ryan when he says someone was a murderer because he was a “nutter”. So it both shows a lot of prejudice and preconceptions – then challenges them.