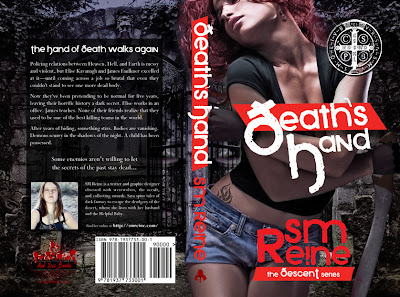 Elise is a kopis. A fighter of demons, and exorcist, a warrior for the light and innocent against the dark. Or she was anyway. She's retried, she's an accountant now. Of course she may have to poke some of her clients with sharp things now and then to make them pay – demons can be pretty stingy – but she's put all of that demon killing behind her now after a particularly horrifying experience where she nearly lost everything.

Except James, her apis, her shield and childhood mentor, isn't so willing to let go. Especially since he is the high priest of the local coven – and one of his members has a possessed child. He cannot abandon her – but nor can he free her without the help of his kick arse accounting friend.

Of course, what starts as a possession gets much much worse. With demons from the past arising, old fears coming back, the walking dead and a legion of lesser demons - with the entire city at risk and people they're close to betraying them – as well as dragging their normal, unskilled, ignorant friends in the dark to do battle alongside them.


Dark powers, kicking arse, magic and demons – what's not to like? I do like this story a lot – it's intriguing I never really knew where I was going and while the premise sounds fairly tried and true, the details were sufficiently unique for me never to be sure exactly what was going to happen – it wasn't predictable, which is rather rare and nice to find. The action scenes were nicely done – I have seen better but not many – they didn't fall into the common traps of being bogged down, unrealistic or hard to follow – they were clear, concise and exciting

The world is, again, relatively unique. The focus is on the myriad kinds of demons and their offshoots and it's less about slicing and dicing them (though there is a nice amount of slicing and dicing) so much as exorcising and banishing them. We didn't see a lot of the world – and I would like to see it expanded a lot more (in fact, I think this book could have used a little world building, especially as some demon types are named but nor explained) - but we have solid hints of angels and demons, witches and other magic users all together with a lot of variety and variations within each category. I want to see more, yes yes I do. There's a lot to intrigue here, even if the taste sample was a trifle stingy

I like all of the characters in this book – which is unusual. They are very real and human to me – from relatively minor characters like Betty and Stephanie through to James and Elise

Elise is a very real and complex character. She's strong and cold, but compassionate. She has scars in her past and they actually do reflect on her current actions and beliefs. She lacks spunky agency, doesn't need rescuing and saves and rescues other people from the lead. She fights the darkness and is scared. Actually I believed her fear probably far more than any other characterisation I've seen in the genre. We have a lot of protagonists that describe how afraid they are – but while they will tell the fear, they will rarely show it. Elise showed her fear and made me believe it. It made her very human and her actions very real.

The one criticism I have of Elise is that she's an anti-social loner type – notthing wrong with that, I'm one myself. But there's antisocial loner and there's “as fun to get close to as a rabid porcupine” and Elise dips into procupine-dom a bit. I can understand her being curt, throwing out “shut up and leave me alone” vibes

My second criticism of the book is the pacing – it isn't to my taste. We see a lot of hints about the world in the first half of the book, we also are introduced to a lot of characters that don't seem very important. We spend a fair amount of time in Elise's daily life. All of it is decent fore-shadowing and character development – most certainly, I won't say any of it is useless – but at the same time we're kind of meandering, I would have preferred it to pick up. It's not nearly as bad as Vampire Academy or Bloodlines, not by any stretch, the plot happens and gets moving from about 45% after a good solid foundation has been built, but I would have liked some more hooks earlier in the book – either through world building or story development, to get me to dive into the book with glee. I was interested, but I wasn't hooked and reeled in – and with this world, this story and this character, that's a shame because it had every potential to do that.

There are POC though they are secondary roles and not part of the major cast, none of them are problematic however. There is one implied lesbian/bisexual succubus who is around for a few seconds, unfortunately she spends that time hitting on the straight protagonist that I could have done without

All in all this is a very good book – and more than that, it's a great set up for a series. This is an introduction that showed us characters, a world, and all in all a setting and foundation for a great series while at the same time making sure the book itself had its own story to tell and wasn't JUST a foundation. I've given it a 3.5, mainly for slow pacing – it's probably around a 3.75