Review of Aloha From Hell By Richard Kadrey 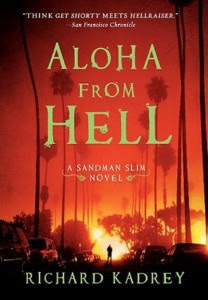 After reading Kill the Dead, I was really hoping that Aloha from Hell would redeem the story of Sandman Slim for me.  It was certainly a better book than the second book in the series; however, that doesn't make this an exciting read at all.  At best all I can say about this book is that it didn't bore me, but it certainly didn't excite me, or encourage me to read any other books in the series.  I almost feel as though he is bored with his own series.

This entire story has been leading up to Stark's confrontation with Mason, his arch enemy.  The real war between the two began when Mason killed, Stark's girlfriend Alice, and then sent Stark to live in hell for over a decade.  Mason however is motivated to destroy the universe because he was tortured as a child.  Apparently, it was not enough for him to achieve his vengeance on those who wronged him, but the entire world has to pay for his hurt. For all of the havoc that the two have caused across the universe, it seems that the relationship between Stark and Mason comes down to a pissing contest.  Really?  I know that we have a male protagonist, but would it have been so hard to come up with a more substantial foundation than a juvenile pissing contest? I also think it is worth mentioning that it took three books to get to the point where Mason and Stark finally resolved their issues and quite frankly, it was anti-climactic and felt more like a set up for a fourth book in this series.

The one thing that Aloha from Hell has going for it, is that unlike Sandman Slim and Kill the Dead, it is not as littered with as many problematic failures. The word lame several times which is of course an ableist slur, and women are referred to with reductive language; however, that is still an improvement. The cast still remains White and straight however.  It seems that diversity is just one leap Kadrey is as of yet unwilling to make.  I suppose what I don't understand  how a writer can create a world with all manner of angels, demons and Lucifer himself, but cannot imagine a single marginalized body in his narrative. The closet this series comes to a disabled character is Kasabian - a man without a body. I suppose I should just be thankful that he has at least stopped using gay slurs to attack straight men.

It is worth noting that erasure is it's own from of prejudice.  Just because Kadrey didn't use f@ggot as an insult in this book does not mean it is not problematic that the entire large universe that he created does not have a single GLBT character.  It is also worth noting that though a large part of the series is set in L.A., people of colour are notably absent.  To read this sort of book one has to suspend belief but should the reader really have to go as far as to believe that city like L.A., or Hell where all the souls of the evil go is completely homogenized.

If Kadrey does write another book in this series, I will read it, not because I wonder what happens next, but because I try to finish whatever series I start.  At the end of the novel, Stark becomes Lucifer because having defeated Mason, and Lucifer abdicating his position to return to heaven, Hell needs a new top dog.  This it seems was always his destiny, and he is held to it when the Angel separates from him and disappears to heaven. I am assuming at this point that the goal of the next book will be to have Stark return to earth and re-unite with his judgmental angel. I can only hope that this confrontation does not take three books to occur, the way that the Mason vs Stark battle took.

This series won't bore you, but it won't really entertain you either. At best, it's mediocre, and at its worse, it is filled with so many fails, that you may feel the desire to throw the books across the room in disgust.  The relationships are trite, though the world setting itself is very large.  Considering that Kadrey had an entire universe to work with, he really didn't do much with it.

I am giving this book 2 1/2 fangs, though it had less fails than the other two books, simply because now that Kadrey is on his third book, he really should have offered his audience more than he did.