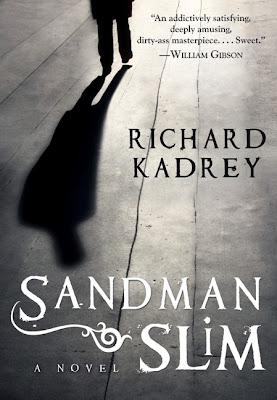 Sandman Slim is about a young man who is tossed into Hell alive by his fellow magicians.  Early on he exhibited far more talent than the rest of his circle and he assumed that jealousy caused them to want to be rid of him.  Once in hell he was put into an arena reminiscent of the roman Colosseum to fight various creatures.  Stark was expected to die immediately, but much to the shock of the fallen angels that populate hell he survived.  Eventually, he became a sort of hit man or "the monster that killed monsters," because being human, no one expected it of him.
Stark is given a key to the room with thirteen doors, that allows him to travel anywhere and when his girlfriend Alice is killed on earth by the very same circle that imprisoned him in hell, he murders his handler Azazel.  He escapes hell with The Veritas, a coin which always tells the truth and the black blade.  Due to his time in hell, Stark is very hard to kill though being stabbed or shot will still hurt.  After one attack with a weapon his body become impenetrable to a similar attack, which is good because this book is absolutely filled with action.
Okay, we should talk about the problems.  This book is largely set in L.A. and there are no people of colour.  This kind of erasure is commonplace but it is still highly irritating and especially so when the protagonist is a White male destined to save the world. There are also no GLBT characters however they are not completely erased because Kadrey decides to use a homophobic slur twice in the book. First on pg 106:

"Why don't you get out of here Grandpa? We have a reputation and you're driving down property values. Cherry doesn't want to talk to you.  And, by the way, you look like a faggot in that jacket."


Wells snaps, "Don't touch that." He's still not looking at me. "And the Sub Rosa can kiss my ass. I don\t work for pixies and necrophiliacs"

He says, "pixie" the way a redneck says faggot."

Okay, here's the deal: If you are going to erase a marginalized group erase them completely.  There is no justification for throwing in hateful slurs. It dehumanizes and detracts from the value of the story itself.

Stark's actions are to get revenge for the murder of his girlfriend Alice, and for imprisoning him in hell.  We are treated to a few flashbacks of Alice alive but basically, she is just a disembodied heroine.  With the exception of one female angel, women have absolutely now power in this story.  Allegra who works at the video store which he takes over after beheading Kasabian the owner is quickly drawn into danger because of him.  Though she actively chooses to enter into a relationship with him, she does so completely unaware of his complete history.  He simply tells her that he is a magician and that she has no power.  Of course, I am not surprised that he ends up saving her as a byproduct of saving the world.

Honestly, the faults with this story are common to this genre even though they are irritating and wrong from a social justice perspective however, I still enjoyed this story.  There were moments of absolute humour like when Stark interacts with Lucifer at the end of the story and is given Kasabian's head as a sort of two way radio between earth and hell. Also, the idea of him feeding the head oly to place a bucket below it so that he can then spit out the food, while gross was amusing.

Because Stark spent eleven years in hell, this means that things like Blackberry's and Google Maps absolutely fascinates him and his journey to catch up with the world is fraught with little problems. The world changes even when we don't. He is constantly aware of the weird looks he gets when he shows ignorance of everyday things that we take for granted and it is absolutely hilarious each time he is corrected because he cannot seem to get a handle on basic things.  Even his phone vibrating in his pocket is enough to confuse him.

Even though I am a Christian woman, the irreverent discussion of heaven, hell and the story of creation absolutely fascinated me.  For Stark, God is a fuck up and the Devil is impotent. Spark expressed the desire to see them both retire, but recognized that the alternative may be worse than what is already in existence.  He had no problem mouthing off to the forces of good and evil and in fact saw them as akin to each other and mocked an angel when she called him an abomination.

I was also fascinated by the fact that Stark is not a thoughtful man and is often prone to what we at Fangs for the Fantasy like to call spunky agency.  This is something that we often see restricted to female protagonists.  When Stark broke into a very exclusive gentleman's club to steal an object, instead of keeping his eye on the prize he runs after one of the people he deemed responsible for his imprisonment.  He was warned not to do so but he does it anyway.  This of course was an absolutely irrational senseless decision to make.  Perhaps I enjoyed it because of the fact that women were so powerless in this story, that seeing a male character live out one of the tropes normally assigned to women helped to take the sting out of the sexist reduction of women.

I am really looking forward to see where the sequel to this book takes us.  Stark ended up saving the world, but the hellions still want to see him dead and Mason, his arch enemy manged to escape to hell.  Though he has agreed to freelance on a case by case basis for both heaven and hell, he is not embraced by either group and at anytime, either of them could see fit to end his existence.  Stark represents the grey area between the two groups and even the realm of fantasy, most are only comfortable with simple binaries, rather than grey's who refuse to submit to supposedly higher authorities.