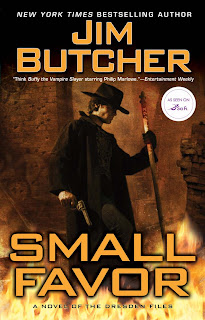 Harry's life is all exciting again and the plotting in the supernatural world is reaching greater, and more confusing, levels.
An entire building was destroyed by immense power and in the aftermath it was clear that Marcone, Chicago's mob boss, has been kidnapped. Harry is on the job working with Murphy – and only has more incentive when Mab, Unseelie Queen of the Winter Court, calls in one of the favours he owes her to get him involved – and threatens him with her not-inconsiderable wrath should he refuse. Of course, this is complicated because Summer objects most strongly – strongly enough to send champions to seek and kill Harry to end his involvement.
To make things far worse, the Knights of the Blackened Denarius – Fallen Angels bound to human hosts – are involved. Not just some as he had previously faced – but all of them in their infernal power and plotting, and he only has 2 Knights of the Cross to back him up.
And into this web of plotting and lethal intrigue steps the Archive – the sum of all the world and all of history's knowledge.

Jim Butcher does epic well – and this was one of the better examples. The sheer number of forces, the sheer power of them made the book epic in and of itself. I like his combat scenes and his ability to fully communicate both what is happening and the powers involved extremely well. Between the battles with Summer's Gruffs, Winter's Hobs, the Archive, the Denarians and even mobsters it all held together well and was an exciting and well paced book to read.
He also has a talent for mysteries and this was extremely well done. There were constant questions throughout the books, plots within plots. Hard choices and difficult decisions – and none of it was simple. Yet, at the same time, the information was there and it was technically possible to reach the answer – so we had none of the usual sudden flashes of insight based on random unexplained inspiration that is so common in mystery books. What impresses me most is that this book had a long, difficult and unexplained mystery with several extremely powerful and unknown forces involved yet at the same time never devolved into being too convoluted or confusing to follow. Despite the huge number of actors and notices, the story was never lost, derailed or impossible to follow nor did it become work to follow the threads nor did it become boring through info-dumping and navel gazing.
In short, the story was perfectly balanced. There were several places where this could have gone wrong, where it could have become shaky. The competing plot lines could have got too confused. The fight scenes could have bogged down. The plotting could have become too convoluted to follow. But it was all handled and brought together with style – yes, I loved it.
My one niggle is that I want to know why Summer was involved in this at all. There are often lots of loose ends to be cleared up but this went beyond a loose end – this was a great big hole. Why did Summer want to stop Harry? I can see Summer being neutral (Eldest Gruff's interactions with Magog points to Summer being respectfully neutral towards the Denarians) but I can't understand them wanting to kill Harry to stop him interfering in the Denarian plots. I don't think “because Mab wants it” is really sufficient excuse – especially after the Archive was involved. I hope it will be developed in later books.
Character-wise, I could do without the whole Luccio/Harry relationship. Not because I find it bad in and of itself – I actually quite like it. Luccio is the instigator, is confident and I think they could work. No, it bothers me because nearly every woman Harry has dealt with on a repeated basis has on some level been a love interest. Murphy had the whole will they/won't they thing. Susan was his girlfriend. Molly had a huge crush on him – and now Luccio and he are possibly dating. With the exception of Charity (who was always rather over the top in her dislike of Harry), there has been a romantic potential with every woman he has dealt with for any length of time. I don't like that – I doubly don't like it since a) 99.9999% of all women Harry meets for even a second are attractive and b) we're usually treated to a long description of how attractive they are and how much Harry thinks they're sexy. This applies even to shapeshifting daemonic Denarians who have only shifted their heads to human. I would like to see more female characters in the series approached without their attractiveness and romantic potential with Harry being a factor. I already have a horrible idea that Ivy is going to grow up and have a crush on him.
I'm surprised Murphy didn't take up the sword (and this is my, “I told you so” moment) since in a way it can be viewed as an extension of her current job. I will watch with interest.
I have to say, again, how much I hate Michael. I really do dislike him as a character. He's arrogant, he's self-righteous and he constantly imposes on those around him. I am tired of him demanding people censor themselves around him – or insisting they think as he thinks they should. I find it beyond frustrating that while everyone else is sitting around and planning he's in a corner saying “have faith” almost judging people for their attempts to be prepared. And his “morality” is borderline ludicrous – not killing the Denarians so they can repent – never mind the damage they do while Michael is sat around waiting for them to say sorry. Frankly, I put Michael in the same category as Hendricks -a thug whose good at fighting but has nothing useful to say – but worse, because Michael is a road block all too often. I am happy that Charity has backed up on the whole “you are corrupting my husband!” but the implication of Michael having kids and Harry should feel guilty for endangering them annoys me because, as a knight of the cross, fighting the Denarians is much more Michael's duty than Harry's.
Sanya was there as a POC character, and while it's unusual to see black Russian's portrayed, I also dislike the ongoing theme of POC as foreign in the books. We rarely see a POC who isn't from elsewhere, and hardly ever in anything like a central role. As ever, there were no GBLT characters, but at least Harry and Thomas dispensed with the gay jokes.
Despite some issues, the story of this book carried me. It was one of those books that made me resent every interruption, that kept me up late at night to finish it and that made my husband complain that he was getting less attention than my kindle. Yes, I loved it.