Review of The Neon Graveyard by Vicki Pettersson 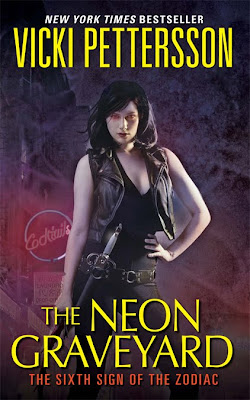 The Neon Graveyard is the last book in the Pettersson's Zodiac series.  I didn't feel any sense of sadness when I finished reading and perhaps because by the time this book ended, I was more than ready for this series to come to an end.  What started off as an amazing idea with a unique and a large world ended up being tired and overly drawn out.  Having read all six books, I think that this series could easily have been reduced to four books.  A book for each sign just dragged out the inevitable end of the series.  Honestly, from book one, was there ever any doubt that this series would end with the death of the Tulpa?
The Neon Graveyard could easily have been renamed to everyone gets theirs in the end.  In The City of Souls: The First Sign of the Zodiac much time was spent confronting the issue of absolutism.  It was clear that for Warren the means justified the ends in every situation and if someone had to suffer or die, then so be it.  This made him no different than the Tulpa and so basically from that point on it was clear that though Warren was official a member of the Light warriors that he was closer to a Shadow warrior.  In The Neon Graveyard Warren's hatred of Joanna/Olivia was a driving force.  He threatened several times and made it clear that it was his goal to see her dead.
Ultimately what Warren wanted was power.  When he realized that Joanna/Olivia may not be the Kairos he was determined to cross over the Midhaven to steal away Hunter and Solange's child and raise her as light.  So wrapped was he in this mission, that he did not care about his troop's reaction to Felix's death.  I was Joanna/Olivia who recovered his body.  When Vanessa sacrificed herself so that Joanna/Olivia could escape Midhaven with Hunter, Warren once again ignored the pain that his troop was feeling because he saw an opportunity to kill Joanna/Olivia.  In the end he was trapped in Midhaven and Tekla became the new leader of the light.
To Warren, Joanna/Olivia's greatest fault was her refusal to obey his commands and sacrifice herself to his every whim regardless of what this cost her.  It seems that what Warren forgot is that in a matriarchal society, women have power and do not necessarily have to submit to a man.  In the end, Joanna/Oliva, Chandra and Tekla, the three women whom he had wronged imprisoned him in midhaven.  I suppose one could see this as an empowering act but it still does not explain how it is that a man became leader of a matriarchal society to being with.
The one place where women had power over men is midhaven and there women ruled as goddesses of the elements while draining men of their soul for power. Solange the strongest woman there tortured men to feed her deformed soulless child. I suppose this was meant as an example of the phrase, absolute power corrupts absolutely, and therefore a matriarchy in and of itself would not be enough to end the idea of gender oppression if one had the right resources.  My problem with this is that Solange's most heinous acts occurred because of her desire to feed her soulless deformed child.  When this is juxtaposed to Joanna/Olivia's pregnancy bring about a complete acceptance of herself it turns motherhood into a catalyst revealing something innate about a woman.  To me, this came far to close to suggesting that motherhood is not only the natural desire of all women but the absolute destiny of all women.
I suppose this entire series could be described as one woman's fight to rid herself of her demons and accept herself for she really is.  The problem is that no matter how many shadowhunters Joanna/Olivia killed, her identity was still reduced to wife and mother.  In the sex scene that happened between Joanna/Olivia in their unofficial honeymoon, Hunter flipped her on her back and said, "Only and always means you'll give in to me too. (pg 262)"  This was followed by:

"I'm going to brand you on the inside. So that from now on wherever you go, and whatever you do, everyone will know you're mine."
He pushed my legs flat, and buried my answer into the pillow, though he wasn't exactly waiting for my surrender. He took it though. I reared back as he barreled forward and he felt, and claimed, it. Forcing his body into mine, he kept forcing until it was mine. (262)

I know that Joanna/Olivia absolutely consented to this sex act but having Hunter speak about ownership of her body after she had just aided with banishment of Warren and still had to face the Tulpa was problematic.  For Joanna/Olivia to finally have the happiness and acceptance that she craved she had to once again submit to a man, though she apparently hailed from a matriarchy.   In the end though she managed to kill the Tulpa, Hunter saved her, telling us that even in a matriarchy, a woman can never save herself.


After reading Cheat the Grave, I found this book to anticlimactic. It certainly was not the worst book in the series but because it depended on some sexist tropes to wrap up the loose threads, it was not nearly as enjoyable as it could have been.  Throughout this series, Pettersson clearly grew as an author.  She went from being absolutely cissexist to simply relying on the erasure that has become common place in this genre.  Erasure is in an of itself a sign of privilege however, I would rather see an author erase a marginalized person than perpetuate harmful isms. She did in the end give us Carlos who featured prominently in the book but I do feel that this alone fell short of true racial inclusion, this book was after all set in Las Vegas.
In the end, I don't regret the time I spent reading this series however, it will not go down as one of my favorites.  It started with such potential and just fizzled out slowly.  Petterson did try to include some fun reference by having Joanna/Olivia say things like crying like twi hard, and screaming like a teen seeing Pattinson on the street but even this new approach could not regain the excitement of the first book.