Halfway to the Grave, by Jeaniene Frost, book 1 of the Night Huntress series 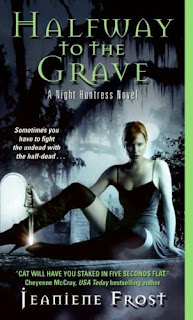 Cat's father was a vampire – a vampire who raped her mother and was never seen again. She has been raised to hate  all of the undead – and even a part of herself, constantly checking herself – and being checked by her mother – to ensure that she never becomes everything she fears. As part of this – she hunts. She hunts the vampires who troll the bars and clubs, cheered on by her mother.

Until she meets Bones. A vampire who isn't so simple, and a vampire who shakes Cat's oh-so-simple world view. Increasingly she realises that not all vampires are as she always imagined – nor are all humans so clean as she'd like to think. It grows further confusing for her as her relationship with Bones deepens into something more.

Not that Bones is peaceful – he's a vampire with a mission – and that mission involves the deaths of many more vampires and shutting down a predatory ring that no-one would argue is anything but evil.


In general I think this book was ok. And yes that is a “damned with faint praise” line. It's not particularly original though it has interesting quirks. It is interesting to see Cat's very narrow view be increasingly widened by Bones and experience – but I have to say it was never done subtly. There were always great big glaring lessons that came off a bit like “oh my god, humans rape!” that had me rolling my eyes. Cat assuming that every bad thing done to everyone was caused by vampires and then having a blinky surprise moment each time made her seem ludicrously naïve and narrow, especially as she repeatedly accuses Bones of things based simply on the fact he is a vampire despite multiple refutations. And yes she is both – but it felt clumsy and ham-handed. Like the author is purposefully writing in after-school special life lessons. The same goes for Cat's growing acceptance of herself and rejection of her mother's hatred – it's not subtly done (and yes, there was a very not-subtle 'closet' reference in there that Did Not Amuse me). More nuance, less clumsiness please.

Aside from the romance plot, hunting down and investigating a circle of vampires that were kidnapping young girls was vaguely interesting but there was never any real mystery. It wasn't a whodunnit – we knew whodunnit, it was more a whereishe, which is considerably lacking in suspense and mystery. It wasn't badly done by any stretch, and I wasn't bored,  but it was neither original nor especially special.

Now I have to come to one of the main problems I have with the book – perhaps the only real problem beyond it not being all that shiny. The dialogue.

The dialogue is stilted, it's clumsy and often involves a series of mini-speeches. No-one talks like this, no-one repeats themselves this much, no-one has so many lectures in their speech and no-one has a conversation where both parties never say anything less than 2 full paragraphs of speech. It's often over-descriptive, over emphasised, over dramatic and generally convoluted. Very few of the discussions in this book felt real to me.

And we have to talk about Bones, the British vampire. Yes, I have to talk about the British accent. I have to. Someone bought Jeaniene Frost The Big Book of British Slang for Christmas and with its help she set out to create an authentic British character. So bleedin' bloomin' (other “ings” keep their g. But not these for this is authentic) bloody hell, luv, let's shag, pet and talk about your mum with this bloke, bollocks, knackered etc etc.

Seriously, I started reading passages aloud to Beloved so we could laugh over them. I think the character is based on Spike from Buffy. But this is Spike if he were played by Dick Van Dyke of Marry Poppins accent infamy. Dick Van Spike's accent was just awful, anachronistic, the word order was all wrong, full of grossing inappropriate and contrived idiom, with random missing letters that were either too much or too little. It served as comic relief, but it broke me from the story a lot.

Social justice wise – erasure, erasure, erasure again. We have some bit part POC, no GBLT people, pretty sadly standard. Cat is a strong character in many ways but still follows the lead – and the loins – of a man for much of it, still she is shown making her own decisions and pulling a switch here and then, even if people do have to work round her at times.

On the whole, I didn't dislike this book – but nor did I particularly like it. I'm not looking forward to book 2, but nor am I dreading it. Yes, it's a good, solid, mediocre 3 in my eyes.