Review of Kill the Dead by Richard Kadrey: Book 2 of the Sandman Slim Novels 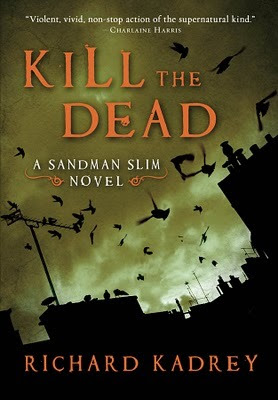 Kill the Dead is the second book in the Sandman Slim novels.  You can find the review for the first book, Sandman Slim here.   As with the first book, Kill the Dead involves Angels and Demons but this time the threat the walking dead, otherwise known as various types of zombies.  The problem however is that the reader is not really made aware the the zombies are indeed the "big bad" in this book until Stark suddenly had to deal with them.
Unlike Sandman Slim, Kill the dead, is really quite disorganized. The plot just seems to float around while Stark has interactions with various supernatural beings.  Elements are introduced that really go nowhere and at times the story is really hard to follow. The cast of characters is actually very large, making it difficult to remember the significance of each person.
Even with all of the aforementioned issues, perhaps the greatest downfall is the constant use of ableist language throughout the book.  Kadrey had no problem having his characters call each other retard.  The disabled community has made a concerted effort to get people to recognize that retard used as a pejorative is ableist and wrong and yet here Kadrey is, littering his text with this word.  If this were the only example it would be bad but unfortunately, Kill the Dead is like a primer in how to fit ableism into a text.
In the first novel we learned that Stark is a nephilim. When Lucifer appears and hires him to be a bodyguard, the weak context is enough for the reader to question if, Stark is Lucifer's son.  Why else would the fallen angel require a bodyguard.  It turns out that Stark is not a chip off the old block, merely the man that Lucifer has chosen to take his place.  Lucifer it seems wants to return back to heaven.  This means that both the earth and hell well be in jeopardy without his leadership.
All of this is clearly a set up for the next book, Aloha From Hell which is due out, October 18th. Perhaps that this explains why Kill the Dead seemed so disorganized.  Perhaps, Kadrey was laying the groundwork for the next book in the series.  Stark has yet to face Mason his arch nemesis and the fact that Lucifer wants Stark to take over hell, puts them on a collision course.  Stark did turn down the job, however he cannot avenge the death of his girlfriend without confronting Mason.
We know that the next book will be all about the big showdown, but what I don't understand is why we should care. Spark is the sort of anti-hero from the very beginning, thus giving the reader no real reason to identify with him. He seems to move from fight to fight with brief entanglements, that is when he is not busy being a megadouche.  The one thing that is true about Stark is that everyone around him dies or gets hurt.  He is clearly suffering form depression and is attempting to drink himself to death.  Perhaps this ptsd -- a sort of reaction to everything that he has seen and done but regardless of the cause it makes him unlikeable.
I am going to read the third book in the series because it promises to be an epic showdown.  An angel wants to overthrow God in heaven and hell might just be up for grabs.  I suppose you could say that I am reading this book in spite of the protagonist than for him.  In the end I don't believe that Kadrey will take the nihilist apporach with his world, Stark did after all save it twice; however, it sort of makes the constant doom and gloom unnecessary.  I think Kadrey should spend a little less time trying to be edgy and a little more time investing his characters with a personality.