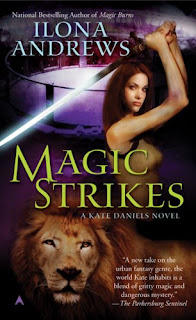 Derek the werewolf is in over his head, having annoyed Loki's grandson and seeking to free a woman from the grasp of inhuman arena fighters, Kate Daniels finds herself dragged in to help him, save him, avenge him – only to find how much larger things are.

Starting out to save Derek from his love life and aid Saiman with his business dealings, Kate finds herself trying to solve a murder, save her friends life and then having to keep it all from the Beast Lord, Curran himself. The plot only grows deeper and more dangerous as enters the world of shady, underground gladiatorial combat – to the death. She quickly falls from just investigating to having to participate – and win - as the only way to save her friends, the pack and possibly all of Atlanta

As if there weren't enough at stake, her past returns to haunt her as she is driven to reveal more of her abilities and the far reaching plots of Roland, the Master of the Undead, begin to stretch into her territory. She has to chose between revealing her secrets that may cost her her life – or watch her friends and loved ones fall.


I love this book and love this series :). The world is incredible, rich, diverse, strange and unique – and steps outside so many of the standard moulds we have come to expect from urban Fantasy. We saw a lot of non-western cultural traditions in this book, with both the arenas and the primary antagonists – which drew heavily from Indian and far eastern cultural mythology. Both were explained pretty well, with lectures that managed to avoid being boring info dumps but managed to convey background without it just being “ a new magical creature with a foreign sounding name.”

In fact, the exposition in general with this book was extremely well done. We learned a lot about Saiman, about Kate's history both how she was raised and her parentage, we learned more about Roland, about the arenas, about the rakshasas – and none of it was presented in an especially dully or tiresome or unrealistic way – nor did it break up the story as exposition has a habit of doing. I would say Ilona Andrews has a flare for not only a truly brilliant world, but also being able to present it with skill and style that outstrips most (if not all. I give Jim Butcher, Kim Harrison and Kevin Hearne kudos for having excellent worlds that are extremely well explained but I think Ilona Andrews may be stronger in this, albeit weaker in other areas) other authors. An on the subject of description – Ilona Andrews can write a good fight scene. In the arena battles and the massive fights with the rakshasas it was easy to picture, realistic and well paced.

The story itself is exciting. It started a little slow and I was a trifle irritated that, again, Kate seemed to be being dragged into other people's problems rather than picking and choosing her own life. But the epicness that quickly developed, the scale of the problem, the extent of the damage and what was at stake quickly over-came that. This wasn't about Saiman's business or Derek's love life and it kept escalating at every stage – escalating and personalising and giving Kate reason to be involved, rather than her being dragged along into other character's problems.

Speaking of other characters – I love how they're all written and how they all feel very real. This isn't just Kate and Curran's story – even relatively minor characters like Andrea and Raphael have their own agendas, their own reasons and their own motivations – even Derek is more than just a sidekick in other people's story and I don't dislike any of them. I'd actually like to see more of all of them – especially Dali, the blind Indonesian weretiger using eastern calligraphy based magic.

I need to talk about the relationship between Curran and Kate. He continually pursues her even when she has repeatedly said no. And no, I'm not a fan of the whole “you want me really” trope – yes she is attracted to him, intensely. She still said no. We have a round of Explained by the Woo-woo but it's still a disturbing trope – if a woman says no you just have to keep wearing her down. And the shapeshifter mating rite that involves the men invading the women's homes to prove they can? Yeah – ladies, I'd pack some bear traps.

Despite hating these oh-so-common tropes, this is one of the few relationships in Urban Fantasy/Paranormal romance I like. Partly because Kate hasn't been worn down – they've kissed but it's book 3 and they have not yet had sex. There's also a good and almost unique scene in this book where they're making out, Curran says “say no and I'll stop.” And Kate? Says no. And he stops. Virtually unheard of in Paranormal Romance! (She then starts it again – but its she who starts it).

And I like how they bounce off each other. I like their snark, their sarcasm, I like how she's never cowed by his physical intimidation. I like their fights and their arguments – it's one of the few times when the whole “we love/hate each other” is actually done well. You can believe the passion, the fury and the heat of these two very dominant, very powerful people clashing. And they're funny – yes yes they are, I have repeatedly laughed out loud reading their interactions (from the very first “here kitty kitty kitty”).

All that being said, I hate that she was rescued in this book, I really do. Kate Daniels is not only awesomely powerful, but she may be the most powerful being in the city in some ways – and with all this super power, with all these awesome fighting skills she still needs rescuing. She's still a Superdamsel. Sure, it was a well done rescue. She was defiant,. She took down one of her captors and it was her who struck the killing blow – as far as rescues go this was as empowered and strong and kick arse as it was possible to be and at no time was she truly weak or helpless. But she was still rescued.

There was a passing mention of a possible gay character – but only referred to, not actually seen. There were some actual POC people present – but only Dali played any major role and it is, perhaps, a trifle stretching it to consider her a major role. I also dislike the word “exotic” repeatedly raising its ugly head – it's unneeded.


I loved the previous 2 books, but if I hadn't, I'd still say they're worth reading for this book alone. I not only recommend it, but recommend the entire series on the strength of this book.