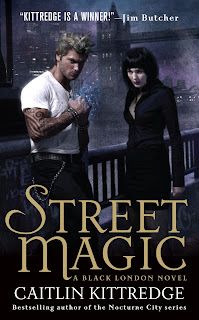 When Pete Caldecot was 16 she saw something magical. With her sister's boyfriend, Jack Winter, they conjured something, a man of shadows and smoke, a creature Jack couldn't stop or hold within his circle. And Pete saw it kill him.

She's 28 now and a police inspector with the MET – and investigating a string of child abductions. The children go missing and the return, damaged and blinded, their energies drained. And there to help her is Jack, back from the dead, but driven to the edge by drug addiction and the pressures of his magic.

Pete now faces a whole new world to deal with, the world of Black London with ghosts and fae and monsters and magic and Sorcerers kidnapping children for their own cruel purposes. Pete must rescue the children, stop the predator and confront the memories she has buried for 12 years – not least of which the memories of Jack and his death. Meanwhile she has to work with Jack, the mage and her one guide to this confusing and horrendously dangerous world which means negotiating Jack's addiction and the bitter memories he has.


This book was probably one of the darker and grittier urban fantasies I've read. Jack is not a nice person – he's harsh, ruthless, cold and merciless when he has to be. And Pete isn't much better – the minute she sees how brutal the Black is, she has no compunctions about charging in and beating the shit out of anything in her way. They're both very powerful, very no-nonsense characters, they're both dangerous, they're both not afraid of being dangerous and they both put violence very high on their lists of actions to resort to. When they kill people they don't weep over the corpses, they don't fret over it, they don't navel; gaze or have emotional breakdowns. They kill them, dispose of the bodies and move on. There was a brief time when Pete had some issues being a police detective and leaving bodies around but she's practical and ruthless and is quick to realise when her rules don't apply. It's actually very interestingly done, because she does stop Jack shoplifting. To get it done, she'll pile up bodies in the Black because there's no alternative, but she doesn't flagrantly disregard the law either. It's an interesting balance.

It does make for a very strong and very edgy pair. Both have their vices and Jack is a full blown drug addict. They're both willing to fight and they've both cursed each other out on a regular basis. Ok part of that is the English accent – I don't know why American writers of British accents feel the need to cram as much “authentic” British profanity into every line. No-one says “bugger” and “buggering” this often. Really. In fact, no-one swears that often – seriously it's ridiculous. Also what's with all the mohawks? Even when punk was in I don't think there were that many (frankly you need to take some great big suspension of disbelief pills to believe this is set in London – or even England. It probably won't be so bad to read if you're not British. But at least because you've concussed yourself to believe English people actually talk like that, believing that Pete is even remotely a police officer will be much easier).

The world itself has only been hinted at in this book, and I do look forward to reading more. The parallel magical world to London, the different kinds of magic users, the fae and other creatures suggests there's a lot there and we've just barely scraped the top. In fact if I have any criticism it's from lack of world building, I want to see more. The world is also, of course, very dark, there's a lot of danger and a very unblinking look into things like Jack's heroin addiction, into violence and death and the cheapness of life.

The book was entirely straight and white... which, y'know, London? London is not a straight, white city. However this London is also largely empty which is also so very not London.

On the whole I like the characters and the world – it's dark and gritty and powerful. I'm intrigued and want to know more, I feel this book was, in many ways, a taster, an introduction to something more. I can't say it was among my utter favourite books, the language useage distracted me too often and I think there was a lot of unnecessary tension between Jack and Pete (the whole “I hate you for what happened back then” “I don't remember, what happened?!” “I'm not telling you! But I hate you” back and forth was unnecessary). In fact in general I think there's more combativeness and battles between the two characters than is necessary, it's a distraction and it gets in the way. And I would have liked more world building. But it was still a good book, I would recommend it and I do look forward to where this story is going in the future. I will approach the second book with hope and interest.