Fallen by Lauren Kate. Book 1 of the Fallen series 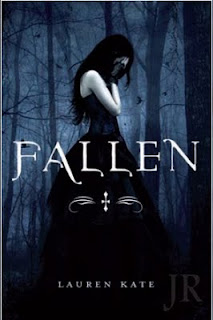 Lucinda Price is a troubled teenager. In her last boarding school there was a fire and the boy she liked died – in very mysterious circumstances. Circumstances for which she was blamed, the shadow of which has hung over her since. Almost as literally as the shadows that follow her wherever she goes, shapes only she can see and hear.
Her past has lead her to Swords and reformatory school where she has to navigate a new place, a new system and friends who aren't what they seem. Right until the moment she finds herself ground zero in a heavenly war and at the heart of a tragic love story that has been repeated every 17 years for centuries on end
Aaand, that's it. I'm good at spin, but I can't really summarise much more. Y'know, usually to summarise plot there actually has to be some plot there.

I had to check several times to remind myself this book was Urban fantasy. By 80% in I was getting desperate. A vampire, a witch, a fairy – gods, a weremole for crying out loud, give me something! Instead we have Luce seeing shadows and having deja vu over the cute guy. That is the mystical extent of this book to that point. After that everyone goes “wooo angels! We fight!” and the book ends. No, really.
The plot is largely high school drama, for all the differing setting. Standard going to classes, talking to school friends, hating this class, liking this one. And yes, there's a Mean Girl (there's always a mean girl). Luce herself annoys me – she acts isolated and alone when she has Penn who is a virtual servant to her, Arianne who welcomed her the first moment and remained friendly (though Luce made little effort to reciprocate the friendliness), Cam who clearly wants a date – and she has several pseudo-dates with him and likes him but it generally feels like she's keeping him in reserve. There's Gabe who Luce hates because she had the temerity to speak to the guy she's interested in – which brings us to Daniel. Daniel who has never indicated the slightest interest in her, avoids her and generally wants to be left alone. But no, Luce gets Penn to dig up his confidential file so she can look into his past, looks for a book in the library because it's written by someone with his surname, stares at him for a mind boggling amount of time – it's creepy and borderline stalkerish.
It doesn't help that Luce seems incapable of having a conversation with anyone. People talk to her and she gives, at best, monosyllabic replies. People are really trying to be friendly with her and she makes them work for it – or answers with the most random of non-sequiturs.
Anyway, we're treated to pages and pages and pages and ye gods more pages, of mooning after Daniel. Seriously, someone get this boy a restraining order. We get odd thoughts about Cam (just enough to keep him a loyal follower) then more and more and more pages about how much she wants Daniel and does he/doesn't he like her. I say again, pages and pages. And pages. In fact that's pretty much most of the book – it's like reading a lovesick teenager's diary. Did I mention there's pages of this?
At about 70% we get to the meat – angels and demons and epic armageddon. Except it's epic an armageddon through Luce's eyes – which is like the end of the world as told from the point of view of a bystander with a one track mind (angelic warriors doing battle takes second rate to obsessing about her boyfriend). There's an epic betrayal, a loss – and she's still thinking about her boyfriend. There's also not nearly enough exposition, not nearly enough explanation and, frankly, not enough at the end here to justify the pain I endured to get to it. An off-scene battle with the promise of things to be explained in the future but at the moment all we have is “yeah we're angels” which is sort of LACKING as far as conclusions go.
None of this helps by the fact the writing is pretty poor. It's overly descriptive, full of redundancies, long winded and everything is accompanied by Luce's interminably dull internal monologue. She can't just walk from one place to the other, she has to do it while musing and internally wrestling with herself. Which wouldn't necessarily bad if she had more than 3 mental settings: 1) Self pity, 2) Daniel is hot, 3) Cam is hot. Honestly it's an effort of will not to skim this book because you can read less than half the words on each page and lose NOTHING that is relevant to the plot or characterisation (characteris-what now? Sorry, not found in this book. No, really, there's virtually no character development at all – it's not even attempted. They all feel like cardboard to me).
On the whole I think this book is proof of one thing – that Richelle Mead has magical powers or possibly (as I've long suspected) that Loki is watching me and is Amused. Yes, in my review of Bloodlines I said it was the most boring book I'd ever read. Typical how this, the very next book I read, proves me wrong, yes, this is now the new Most Boring Book I ever read. Except I'm frightened to say it – I have a horrible feeling I'm tempting fate.
It's vaguely possible we have a genre clash. If you like angsting teenagers agonising for hours over a boy they've had exactly 3 conversations with, if you like high school plot lines with next to no likeable characters (or full characters at all for that matter) then... you'll probably still not like it. No, really, it's not even well done teen angst.
The one positive thing I can dredge up is that, as the first book in a series, the next book could, possibly be better simply because all the dull introduction period is DONE. Everyone's revealed for what they are (sort of) so we can at least have an urban fantasy story rather than a teen drama.