Review: Kitty and the Dead Man's Hand, by Carrie Vaughn, Book 5 of the Kitty Norville Series 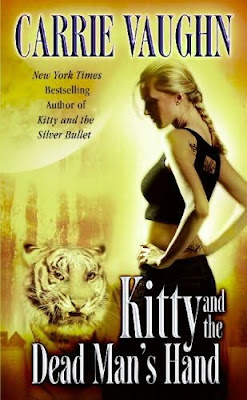 Kitty is getting married and the plans are consuming her life. Wouldn’t it be relaxing if she and Ben could just elope? And if you’re going to Elope, why not do it properly and head for Vegas?
Of course, what should have been the simple option quickly becomes much much more complex. First there’s her producer who thinks Vegas would be the perfect opportunity for her to have her first real television show, which takes a lot of preparation
Then she finds out there’s a gun show full of werewolf hunters with silver bullets in her hotel.
Then there’s the poker tournament and mob plot that ben gets himself involved in.
Meanwhile , Kitty finds herself investigating the Master of the City, lycanthrope animal acts and a magician who may actually be the real thing.
And then Tiamat, goddess of chaos gets involved and it gets really exciting.
What was the point of that?
I’m sorry, but that’s my main response to this book. At the end of the last book I was on a bhigh, Kitty was the new alpha, she was developing a relationship with Ben and she was dealing with a major family issue of her mother’s cancer. She also has to sort out her new pack which is bound to have teething troubles as well as consider where she stands with Rick as the new Master Vampire of Denver and what that entails. And, of course, Cormac is still in gaol. Sounds like a great story, right?
So instead we went to Vegas so they could elope. Left all of that behind – the pause button has been pressed, it’s time for an intermission, it seems.
And then there follows a huge long series of irrelevancies and things that just don’t make a lot of sense. Kitty decides that it’s a great chance to have her first televised show in front of a live audience while she’s getting married (rather than having it at another time, y’know as would make sense).
Then Ben decides to enter a poker tournament on their wedding day. This leads to him exposing a cheating scam which in turn causes him to disappear. Oh and coincidentally there’s a gun show in the hotel she’s staying in – and there’s loads of werewolf hunters there – some of them know Ben from his past. And some of them loathe all werewolves and decide to start hunting Kitty, just because.
For funsies Kitty decides to ramble around the city sticking her nose into random stuff. There’s a show and it has lycanthropes! Kitty must get backstage and ask questions even though every single person in Vegas says it’s a bad idea. Oh look, there’s a magic show and rumour has it it has real magic – Kitty must go and watch it and investigate. Oh look, Master Vampire, kitty must – do an enormous number of other things that are irrelevant.
This whole book just feels cobbled together, full of irrelevant storylines and most of the drama is either self-inflicted or just random convoluted circumstance that has arisen from random convoluted action – it’s somewhat contrived. I hate to say it, but the whole story feels contrived and generally not a fun read – it’s frustrating. It almost feels like the whole book can be summed up with “Kitty and Ben go to Vegas and poke things with sticks until they get in trouble”. A book shouldn’t have you thinking “why, why would you do this?” all the time.
In the end we get a glimpse of meta-plot and perhaps even something incredibly epic. But it’s covered in a brief aside before we rapidly move past. I do wish we could have seen more about Tiamat and built that a little further.
We have some token POC bit characters -  not enough for them to be characters, but the bit guy who gives a direction may be a POC. It says a lot that this is a step up. There are no GBLT characters, but ever since TJ, I think that’s a step up too.
It’s a shame, the last book was amazing. This? Not so much.