Wednesday Reboot: Rise of the Lycans 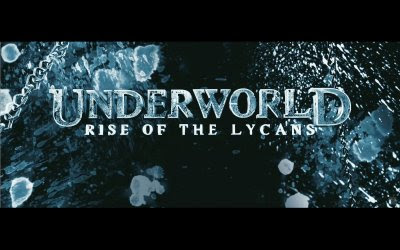 The Rise of the Lycans begins with a flashback to the creation of both species.  We learn that originally once someone became a Lycan that there were unable to ever take human form again until the birth of Lucian, who became known as the first lycan. Victor's initial reaction was to kill the child after slaying his mother, but the decided that he could use Lucian to his advantage.  He began throwing in human slaves in with Lucian when he was hungry and driven by the need to feed, Lucian bit them, thus creating the first in a series of sentient lycans.

Those who are familiar with the series, would find much of this movie to be repetitive. In Underworld we learned that Victor had his daughter killed when she revealed that she was pregnant with Lucian's child.  Lucian made it clear that this was the start of the war between Lycans and vampires.  This means that there were absolutely no surprises in Rise of the Lycans, and yet I can easily say that it was better than Underworld Evolution. I will however acknowledge that at least in part my feelings on this is because Underworld Evolution was a horribly bad movie filmed by a director who seemed to have no idea what to do with this story. Essentially, Rise of the Lycans is Romeo and Juliet with vamps and were thrown in for fun.

Rise of the Lycans continues to the trends of having screen after screen filled with White characters, though we did get to see how Lucian formed his friendship with Raze played by Kevin Grevioux.  Unfortunately, I cannot be excited at seeing the origins of yet another Black sidekick role.  Once again the chosen one, which is the only apt way to describe Lucian, is a White man.


Rhona Mitra plays Sonja, Viktor's daughter.  She is tough and so independent that not even Lucian can control her.  Before you get excited about a badass female character, it's important to recognize that on more than one occasion, Lucian has to speak to her about taking unnecessary risks.  At one point he even has to transition to werewolf, which is expressly against Viktor's wishes to save her.  After Lucian is savagely beaten, she is forced to apologize for not listening to him in the first place.  Anyone else see a problem with this?  I could have done a little less with the spunky agency.

As mentioned earlier, Rise of the Lycans leans heavily on a Romeo and Juliet theme.  I understand that the tale of two lovers who cannot be together is a classic but in this day and age, a father killing his daughter for becoming pregnant by a man he does not approve of is absolutely misogynist.  The director did take care to remind us that Viktor is power hungry and vile, but the scene in which he mourns over Sonja's ashes reads like she left him no choice because of her slutty ways. This means that Lucian fighting Viktor over Sonja reads like a man fighting for the honour of his lady love.

This film is shot at all night to give us the appropriate amount of gloom; however, this means that some scenes did not appear clearly on the screen.  By the time Sonja is killed, I was absolutely grateful to see some sort of light on the screen.  It makes me wonder if the director thought we wouldn't remember that we were dealing with supernatural creatures if we saw even the smallest ray of sunli\ght.

Having Lucian be born into a race of slaves means that the director got to get his kink on with the whips.  I think it would be fair to say that these scenes were gratuitous even though they were designed to reinforce the fact that Lycans were indeed actively oppressed. Perhaps it was case of show rather than tell, but I for one could have done with a lot less show in this regard.

Underworld Awakening Vengeance Returns opens on the 20th of the month and quite honestly, I have not idea what is left to say in this series. It once again stars Kate Beckinsale who awakens from a deep sleep to discover that humans are now aware that they share the world with supernaturals.  This film shifts the story from a war between Lycans and vampires to a war between humans and the supernatural. For the first time in the series, this film is shot in 3D.  I think this is a good thing because after watching all three films, the one thing that is overwhelming clear is that watching this series for the plot is a waste of time.