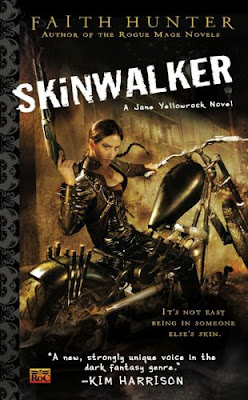 Jane Yellowrock is a skinwalker, the only one she knows. Of course, she doesn’t know much about being a skinwalker or her past - having been found in the woods as a child with no memory of her life beforehand.

She’s also a vampire hunter, and an extremely good one. Now she has made a name for herself, the vampires of New Orleans have called her in to hunt down a rogue that is slaughtering the tourists and the police force - and making the vampires look bad.

Jane has to hunt down the rogue, but in the process she learns far more about her past and her Cherokee heritage, as well as some disturbing things about her history as a skinwalker - and the history of Beast, the great Puma spirit that shares her body. And then she learns things about the rogue that make him more terrifying and more powerful than she had ever imagined.

And, of course, working with vampires is never simple, with their politics and machinations and endless secrets, it can be hard to say the least to decide who to trust and whether you have all the information you need.

I was originally attracted to this book because the protagonist is not only a woman of colour, she is an indigenous woman. The Mercy Thompson series by Patricia Briggs is the only other series that I am aware of with a Native American character. From the onset, I was prepared to have the protagonist be indigenous in name only, but I was present surprised to see that this is not the case. That being said, I must preface this support by saying that though the book included extensive reference to Cherokee culture, and the language, as someone not intimately familiar with said culture, I am not sure how accurate the inclusion was.

Jane Yellowrock is a Cherokee Skinwalker, who was raised in an orphanage from the age of 13 when she was discovered. It is assumed that she was raised by wolves because when found she did not know how to speak or have mastered even the smallest rules for human interaction. Urban fantasy readers are well aware of the fact that dead parents is quite the trope in the genre however in the case, there is clearly more to the story that we are lead to believe in the beginning. Jane has lost her memories but over time some of them begin to comeback to her, and they include a very specific memory of her father.

In the Jane Yellowrock world there are vampires, witches and of course skinwalkers, and it is even alluded to that elves and werewolves also exist. There is some appropriation of GLBT people as Hunter uses the phrase “coming out” on several occasions to describe the revelation of the supernatural to the world. It is clear from her work that vampires are comfortable sleeping with people of either sex, but there is not a specifically gay character in the novel at this point.

Set in New Orleans, Hunter gives us a wonderful feel for the city in her descriptions of the music, the food and even the heat. It is rare to find a book that so accurately does this. I was so happy to finally have a setting that was accurate. Time after time I have read stories in which a story was set in a major urban center with all of the characters being White, but that is not the case in this book. Not only does Skinwalker have a good mixture between specifically White and Black it includes various mixed raced people which is quite accurate for the population demographics of New Orleans.

There were times when the story dragged a bit but I believe it is because Hunter was trying to make Skinwalker as authentic as possible. Yellowrock has the ability to turn into a panther which she calls beast. Beast communicates through images and broken speech which at first is great for the setting but over time gets grating. Beast became a character in its own right and this limited her interaction with other characters in the story.

Jane is also a very sexual being and expresses desire on several occasions. What I like about this is that she never expresses any shame for her desires, though she does not sleep with any man. Many of urban fantasy books rely on a romance even when they are not specifically paranormal romance but in this case, despite her various flirtations with men, Jane remains celibate.

The story itself was interesting - we had plot twists and red herrings and distractions and false leads - it was an interesting and complicated investigation that wasn’t too simple nor too convoluted. And Jane was an active investigator - she didn’t just hang around and hope things happen (or hope things attacked her), if I have one criticism of the story it’s that Jane didn’t actively pursue the rogue as much or as often as I would expect which, coupled with the slight habit of long windedness and over-wordiness, made the book perhaps a little slower than it could have been.

All in all, a good story, a good characters, some surprisingly good inclusion and some very interesting concepts. Definitely a keeper and definitely recommended. we’ve given it 4 fangs - we would probably rate it even higher but the over-writing, long-windedness and somewhat aimless investigation combined to stall the pacing a little - which is a shame, if that had been fixed this book would be a 4.5 or maybe 5.