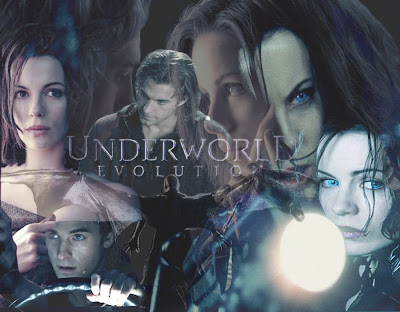 Underworld Evolution was released in 2006 and stars Kate Beckinsale, Scott Speedman and Bill Nighy
The movie opens with a little Vampire/Lycan history.
Legend tells that the war began with two brothers, the immortal son of Alexander Corvinus.
Markus, Bitten by bat, became the blood leader of the vampires.
William, Bitten by wolf, became the first and most powerful Lycan.
In 1202AD William is out of control and killing at will.  Viktor wants him brought to heel quickly, but Markus reminds him that he is not to be harmed. In a battle that pits brother against brother, Viktor sends Markus away in fear that if he dies that they will all die. Fearing his brothers life, Markus returns to the battle before they can kill William and demands that he be placed in his charge.  Viktor attempts to threaten Markus saying that he must learn his place but Markus reminds him that if he dies, that they all die. Viktor demands that Markus be imprisoned for all time far from William.
At this point, I am fairly certain that director Len Wiseman, has no idea what he wants to do with this franchise.What we have here is a morose Shakespearean tragedy attempting to be an action flick.  We have royal bloodlines, twin brothers separated by a curse and a father unwilling to deal with it all.  In the middle of that are Selene and Michael who are attempting to unravel centuries of vampire/lycan rage.  If that were not enough we have Michael the first ever lycan/vampire hybrid who seems unable to adjust to the idea of what he is and that he will need blood to survive.


At times I found myself wondering why they even bothered to attempt to include any plot at all?  So much of the movie seemed to focus on moving from fight scene to fight scene.  It was fight, fight more fight, stop briefly to explain why they are fighting and then of course more fighting.  If action, and gore set against a stark dark background are your thing, Underworld Evolution will be a movie that you really enjoy.

As protagonists go, Selene continues to be her own hero, which is exactly how female empowerment should be done.  Selene actually ends up saving Michael a few times along the way. She is not prone to spunky agency though I still fail to see the root of the relationship between her and Michael.  I understand that they are two being thrown together by circumstance and so the sex scene actually makes sense, but the attempt to invest these characters with feelings of love simply does not work.

Underworld: Evolutions didn't even bother with pretense of inclusion this time.  The characters all remain uniformly straight and White.  As we have said many times, erasure though common is its own form of oppression.  This phenomenon is not unique to Underworld Evolutions; however, it certainly did nothing to endear the film to me.

By the time I was a quarter of the way through this film, I felt myself getting bored.  I had no problem leaving the room without pausing it to get a drink, because I didn't feel I would miss anything.  For me, it all had a sense of been there, done that.  At least in the first movie, there was the introduction of the threat of the  vampire/hybrid to hold the interest of the viewer, but Underworld: Evolutions offered absolutely nothing new.  I felt like I have seen the same stunts in the Matrix and Blade trilogy.  Throwing in vampires and werewolves into essentially a mindless action movie, with a lot of gore, does not a good film make.