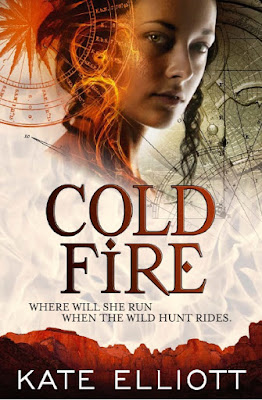 Cold Fire continues the story of  Catherine Bell Barahal, right where Cold Magic ended. One would assume that because Cold Magic included such massive amounts of world building that Cold Fire would delve right into the story, but that is not the case.  For a good 130 pages, the book just droned on.  I am starting to wonder what Elliott has against the beginning of her novels. I once again considered giving the novel a DNF, and it is only because I remembered that Cold Fire was extremely slow to start that I continued on. Once again, Elliot ignored the adage of show, not tell.

Cat is taken the spirit world and emerges in the Antilles. This shifts the story from Europa to the West Indies.  I really liked that Elliot went out of her way to be authentic in both speech patterns and the food that they consumed, but I will say the amount of rum did seem excessive at times.  This was a wonderful shift because far too often, these stories are set in Europe and have a very Eurocentric perspective or the cultures of colour are thin and show an obvious lack of resource.

As with Cold Magic, there is a class struggle going on.  The poor want the right to have a say in their government and as to be expected, the ruling classes wish to continue to have their rule unchallenged.  The rule of law is not evenly applied, and those with power are able to avoid things like imprisonment on salt island. In the north, cold mages who work in houses control the government, but in the south, fire mages are the main elemental power.  It is illegal to be an unregistered mage and because they have been so restricted, many are unaware of their capabilities. Into this word enters Andevai a cold mage from the north and Cats husband through an arranged marriage.  There is also the issue of general Camjiata who is attempting to rebuild his army to invade Europa.  Unfortunately for Cat and Bee, they play a large roll in his plans.

Chief among the questions asked, was is the pen mightier than the sword and what kind of government is best to live under.  Even those who agree that a popular vote is the way to go, there is disagreement about who should vote.  Some argue that like in Rome, only propertied men should have a say because of the responsibility they hold in life -- still others believe that all men should vote and exclude women, while some refuse to even consider the idea of women being allowed to vote.  What I liked about all of this conversation, is that rather than focusing on purely revolution, the characters were actively engaged in a consideration of what would come next. Throwing off one oppression for another is something that happens all too often.

The racial diversity was great and in a genre that normally has all White characters, or token characters of colour, the spirtwalker trilogy is a breath of fresh air. The problem is that Elliot never uses 1 or 2 words where she can insert 10.  There are times when the plot is down right repetitive and positively weighed down.  Even the wonderful romance between Andevai and Cat feels forced at times.  Cat is asked to answer for her sexual history and Andevai makes no such accounting.  If that were not enough, in a moment of rage, Andevai uses this information to slut shame her.  Though we are told that Cat's people have at times had two husbands, and that there are women who take multiple husbands in this series, it was disheartening to see that slut shaming was still a part of the story.

As a reader I always felt like we were on the cusp of something great, only to get bogged down again.  I am going to finish this series because I started it, but I no longer hold hope that the story will move along at a good pace.  If after the second book, the story still fails to even approach its potential, I highly doubt that it will do so in the third book.