Review: Kitty and the Silver Bullet by Carrie Vaughn. Book 4 of the Kitty Norville Series 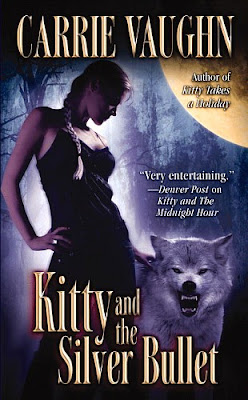 After a long time away, Kitty finds herself drawn back to Denver. First it was Rick, a vampire friend trying to drag her into vampire politics, but then it was something far more personal – her mother has cancer.
Refusing to abandon her family, Kitty is forced to return to Denver where she was previously banished – instantly setting her against her old alphas, Carl and Meg. And also dragging her, against her wishes, into deep vampire politics, not just to help Rick against Arturo, the master of Denver, but also enmeshing her in even deeper webs as a new vampire visits the city and agrees to an interview.
Kitty has to decide whether to flee or stand her ground so she can be there for her family – and she has to continue to navigate her new relationship and new pack with Ben – a pack that is growing. And she has to decide who tom protect and who to risk – especially when her staying at all puts all of her human family at risk.
Kitty just wants to lead her own life – but she can’t abandon her family at this worst time, she can’t abandon people who come to her for help, cannot – and will not – abandon her work and will not run any more.
I think the thing I like most about this book is how it took many of the issues I had with Kitty and the Midnight Hour and fixed them. Carl is expressly labelled as abusive and a complete arsehole. His being a werewolf is adamantly rejected as an excuse or justification. He’s an abuser and treated as such. His victims are victims and treated as such (even if the rescue doesn’t go to plan) and, ultimately he gets his most glorious comeuppance.
Seeing Kitty come back, so much stronger, so much tougher, seeing things so much clearer than she once did was one of those wonderful literature moments; she left a victim and came back and refused to be controlled.
Despite that, Kitty doesn’t come back seeking revenge or seeking to take control. She hasn’t stepped outside of herself. She is, ultimately, still the same person who is conflict averse and ultimately wants to live her own life without disturbance but is dragged into these conflicts, ultimately, to both preserve her autonomy AND to protect the vulnerable. She has evolved and grown as a character without completely transforming into someone unrecognisable. She’s not perfect, she’s not fearless, but she is real, she is alpha and she is strong
I also quite like that Ben and Kitty’s relationship isn’t the smoothest thing ever. They have fights, they don’t understand each other and while, sometimes, I don’t agree with the fight or it’s still nice to see that a relatively whirlwind romance without really knowing each other first does come with some problems.
There were interlinked storylines but I think these series have gotten past the problem with too much happening at once. The story with Kitty’s job, her relationship with Ben and her battling with Carl and Arturo are all pretty well integrated and connected and there’s no sense of reading separate books. The story is very nicely contained and paced and runs pretty smoothly. It also has some very unique twists – including involving the mortal police force. Most of the time in urban fantasy, even revealed urban fantasy, the fighting takes place behind closed doors – it’s rare to see the police called in, it’s rare to see the “real world” intrude as much as it does in the Kitty Norville series
Unfortunately the books remain very erased, there are not POC that are memorable and no GBLT people in this book – and Meg is still referred to repeatedly by terms like “exotic” that are so very dubious to say the least. There is some rather inappropriate and extremely tiresome comparisons of vampires being hidden with the closet as well. I really wish they wouldn’t go there all the time.
The world building and the hints about some severe revelations on the vampires coming soon is fascinating and I watch with eagerness – but not half so much as I watch to see how Kitty will manage as an alpha or how her new pack will evolve. All in all, I loved this book and am eager to see what the next will bring