Review: Kitty and the Midnight Hour by Carrie Vaughn, book 1 of the Kitty Norville series 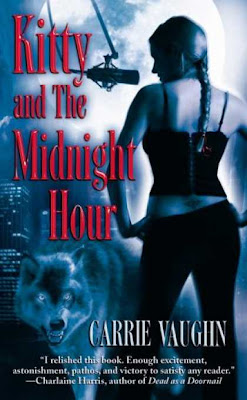 Kitty is a werewolf. Though she has worked hard to keep it hidden from her friends and family – and certainly from her work colleagues at the radio station she late night DJs for.

At least she did, until one show got out of hand and suddenly she is talking the supernatural all the time. Her ratings spike and she grows ever more popular reaching out to people who want to talk about the supernatural – as well as a huge number of vampires and werewolves who want someone to talk to, to advise them and who understands them

Now as an ever growing and ever more famous personality who is openly supernatural she faces a world that is rapidly changing as the supernatural is revealed and acknowledged. Further she faces her pack – and the local Vampire Family – who are less than pleased with her independence and her public revelations.

There's also a travelling preacher moving from place to place – offering faith healing and a way to change supernatural creatures into humans. He seems legitimate to an extent – but none of the people who go for his cure are ever seen again

And there's the pack. The pack that is not pleased by Kitty's independence and is in turmoil from her increased dominance and refusal to accede to her alpha's demands – as well as jealousy from Meg, the alpha female who fears being replaced.

I was surprised by this book. Surprised because it came very highly recommended. I was looking forward to it – it was a treat I'd saved myself for when gloom and doom was on the horizon. I went in with high expectations. These expectations weren't so much let down as beaten down with a large hammer.

The world is faintly interesting -not unique, but we're actually catching a modern preternatural world on the cusp of revelation. We begin the story when the world is pretty much ignorant of the existence of the supernatural and we end with it becoming publicly acknowledged and accepted. It's interesting to see how that develops, the challenges and opinions Kitty faces, working with the police in neither an official context but nor with an antagonistic one, dealing with supernatural elements that want to keep themselves secret.

It's an interesting story but I wouldn't say amazing. I think too much is touched on only shallowly and we have odd tangents (like the faith healer? That was started and it just fizzled out) which didn't work well in a book that was this short. There wasn't enough there for us to have tangents. I also feel that there could have been a great story with the revelations of the supernatural and how this is followed and Kitty, as an open and semi-famous werewolf, would end up being pushed as a spokesperson whether she wanted to or not – instead we got bogged down with the Meg-is-jealous storyline.

And there are other problems that made Kitty not appeal to me. Kitty has vast lashings of Spunky Agency. In fact, I have read few protagonists who were this foolish. She repeatedly agrees to do things then doesn't do them, annoying various pack members without ever really making an attempt to explain, justify or present a counter argument.

Her closest friend and ally in the book is Cormac. Cormac is a bounty hunter who hunts werewolves. He was paid to hunt her. After his assassination attempt falls through she seems to decide he's her bestest bestest friend and starts calling her when she needs advice, help, whatever. Because, y'know, when I need to confide in people I totally look to those who have been paid vast sums of money to put bullets in me. It's almost insulting that her decision to confide and trust in Cormac doesn't blow up in her face.

And when she finds the rogue, despite telling the police it's an internal matter, despite the pack being very eager to take care of it – she decides to go herself. No police back up, no pack back up. Just her and, yes, Cormac, the werewolf hunter (hey, guy who was paid to kill me, want to bring your gun to an isolated setting with me? And I won't tell anyone where we're going and it also contains great spots to bury a body? You do! YAY! MURDER DATE! Let me now change and be helpless in front of you!). Who she then leaves behind to solo the rogue anyway.

Social justicewise, it isn't a great read either.

Carl, the alpha, is abusive. There's no other way to put it – he's not in a romantic relationship with Kitty (though he uses her for sex) but so many of the tropes in Abuse as Love apply here. He is the ultimate Hauptman, he actually makes Hauptman seem tender and kind. As alpha, he frequently uses violence and the threat of violence, to coerce Kitty, demands to control every aspect of her life

While none of this is presented as true love or ideal – it is presented as natural for werewolves and an inherent part of the pack structure. And it's never especially called out to any great degree – what eventually leads Kitty to leave the pack is the lack of support she gets against Meg, not his controlling, unacceptable attitudes. I think I can't truly cover how problematic this is without simply including some quotes:

“Carl didn't like the show because he didn't have any control over it. It was all mine. I was supposed to be all his.”

“This is what she lives for – his attention, his adoration”

“Carl wanted me to be dependent. I wasn't expected to hunt for myself, or help defend the pack. I had no responsibilities as long as I deferred to Carl. As long as I started a cub, he would look after me”

“If we were human, and this was a human relationship, I'd have been expected to leave him. This was abuse.”

Yes, it was abuse. And the fact the participants are werewolves really doesn't change that.

Now take the main antagonist. Meg, the alpha female. She hates Kitty because Carl likes her – yes she's jealous and, of course, Kitty has to pay for that. Most of the plot line is basically Meg trying to get Kitty out of the way.

And TJ. Oh TJ. Yes we have a gay man in this book and he is not overly stereotyped (he's not overly anything, that would require him to have a character). We know he's gay from a couple of hints because we don't see even a shred of his life to formulate our own opinion. Because TJ has one role and one role only in the book – to serve and protect Kitty. He only shows up to protect Kitty, to help Kitty, to give Kitty lifts, to be at her beck and call (ironically, since he's supposed to be alpha to her in this oh-so-rigidly hierarchical pack yet he virtually has a Kitty pager so she can always reach him when she needs him). All he does in this book is work for her, often against his better judgement, often against his wishes. There is no reciprocation in the relationship at all. She doesn't even bother to use public transport or get taxis – she calls him and he comes and plays chauffeur for her.

And let's move on to some appropriation. Kitty hates that she can't tell her mother she's a werewolf and wish she could just tell her she was a lesbian instead. And when discussing laws against werewolves and vampires, Kitty draws an analogy with 1930s Berlin. Yes... I think I'll leave that without comment, it doesn't really need any.

There are no POC I saw in the book, but we do have a reference to one woman with long straight hair that looked “ethnic.”

I didn't enjoy this book. The social justice fails annoyed me, Kitty's actions defied all common sense, the story didn't have a coherent focus and was too short to include so many different elements, none of them, got covered as well as they could have been. However, I will say that it makes a decent introduction, we've been introduced to the world, to the very first supernatural revelations and have had a brief insight into both reactions and how supernatural society works. So as a stand alone book, it's pretty poor to be honest, but as an introduction to a series, I think it has potential and I will approach the next book with curiosity rather than suspicion.