Ghost Story by Jim Butcher, book 13 of the Dresden Files 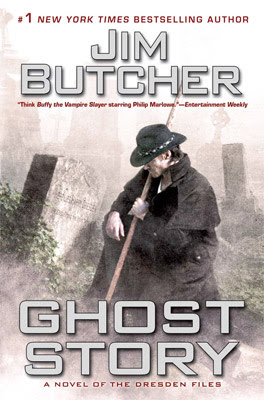 Social justicewise - there's the usual issues of inclusion that is a problem though rather less of the "women are delicate flowers I should help and protect while describing their breasts/legs/whatever" that was so prevalent, especially earlier in the series. There is an annoying scene where Thomas gets to feed on Justine by proxy as she engages in some girl/girl action (and Harry looking in deciding Oh yeah, his depressed brother's going to be juuuuust fine. *eye roll*). It vexes further when we remember how completely absent GBLT characters are in the series.
Still, this book was an awesome book, it really was. It was deep, it was nuanced, it made me think and it revealed a lot more about the world. It had a twofolk twist ending that I did not see coming, I really didn't. It's rare that a book surprises me to that degree. It added a depth to an already very well established world and while it didn't have the same EPIC feeling of the past books, it did have a sense of epic forces and powers.
And we have a promise of a lot of awesome to come