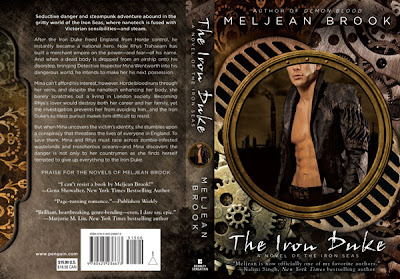 The Iron Duke is essentially set in an alternate reality during Victorian Time. Rhys is the saviour of England because he freed the people from invaders named the Horde by crashing into the tower. The tower held some sort of instrument which controlled the people through nanoagents implanted in their bodies through the consumption of food. These nanoagents allowed the Horde to control all emotions, movement and sexual activity. Mina, the female protagonist is the result of something called a frenzy - horde induced group sexual madness, in which her mother was raped. So devastated was her mother upon seeing her that she ripped out her own eyes.

Rape was a major feature in this novel because consent is clearly coerced throughout the story. When Mina shows up at Rhys' home because a body has been dumped on his property, this small interaction is enough for him to determine her his because he experienced lust for the first in a very longtime. Rhys' says to Mina, “I want to possess you. And if I want something I find a way to have it (pg 167)." I know that we are talking about Victorian times, in which women were the properties of their father's until their marriage; however, Rhys' determination of Mina as property when he had absolutely no claim on her whatsoever, only serves to drive home how little value Mina's personhood is really worth.

When her brother goes missing, Rhys offers to look for him, if Mina agrees to share his bed, with the full knowledge that her family did not have the resources to search on their own. "After paying the taxes, which were hardly lower than the Horde had demanded, and wages for the cook and two maids - far fewer than the town house needed, even with most of the rooms closed up - all together Mina's family earned just enough to scrape by" (pg 52). Obviously by any reasonable standard the family was not truly indigent however, what constituted poverty in those times, in specific circles, is quite different than today; this fact that does not make Rhys' proposition any less disgusting. On several occasions, he forces a kiss upon her, though she makes it clear that she is not interested in him. Mina even attempted to squeeze his genitals in an effort to force Rhys to keep his distance, but instead of causing the horror that she planed, it arouses him. She rejects him with words, with violence and even with a weapon, but Rhys is determined that he can make her want him. I do not know how many more times Mina could have said no, or how much more vehement she could be in her refusals.

When Rhys does sexually assault Mina, he actually has the nerve to be shocked that she is not overcome with joy. This btw, after her consistent stream of rejection for him. She says no repeatedly and he has to restrain her hands when she tries to pull his head away. In response, she drugs him with an opium dart. The next morning he apologises to her and then claims that he would never have forced her into having sex with him, because he is a rape survivor himself -- except that is exactly what he did by ignoring her every time she said no. If that were not enough, Mina falls in love with her rapist. Please tell me what women falls in love with the person who violates them in that manner? I found this absolutely disgusting and was extremely hard pressed not to throw my e-reader across the room. Not only does she love Rhys, she risks her life to save his TWICE.

This book should not have been called The Iron Duke, it should have been called rapeapaloza, for the absolute disregard of things like enthusiastic consent, a love affair between survivor and rapist, as well as pushing the idea that no really means just keep increasing the pressure until you can force a yes. It is hard enough in this world for survivors to be taken seriously, without women writing books that justify sexual assault. It is a shame we wrote our post on Abuse as True Love already, because this book is such a classic example of the problems in the genre. I don't think we've ever read a book that so completely ignored a woman's consent without calling it rape.

In many ways, it is hard to discuss the other themes of this book because the “love” story was such a dominant theme and it carried such terrible messages. Sometimes you have one thing that dominates so much that it's hard to look past it.

And that's sad because we have a story here and an interesting world. The Golden Horde (as in Mongolian horde of the Khans) has crashed through Europe centuries ago. Most of continental Europe was depopulated and nanobots were used to turn the population into zombies (allowing the Horde to access the resources without troubling with a populace to subdue. England has been occupied for 200 years, emotions and drives controlled by the Tower. 9 years ago, England was liberated by the Iron Duke and society was reborn – having to accommodate Bounders – wealthy British refugees who fled to the US and have now returned home and Buggers, British people under the Horde infected with nanobot “bugs”. We have a dangerous weapon that must be stopped before it devastates the country, we have intrigue, we have a shadowy organisation and we have a daring round the world chase with zombies, airships, guns, ships, kraken and all kinds exciting swashbuckling.

The world is broad – with the nanobots, the bionic enhancements, the Horde and the different nations that fled to the Americas, the zombies and the mutated animals the Horde left behind. There's a lot there

Mina has to move through this society as a policewoman, in a male dominated world, and as half-Horde, in a country that hates and loathes her for her Asian features. Mina has a lot of conflict, pressure, upset and pain from this – she faces cruel and extreme prejudice, holding her family close who value her for who she is, while at the same time fearing the prejudice by association they face. There is an unflinching look at caricatures and both cruel, snide racism, as well as violent racism and condescending, curiosity racism. The downside is that while these are presented as wrong, they're presented as wrong because Mina is a good person – rather than being wrong because, y'know, they're wrong.

Still, she's a complex character with nuance and strength in a wide world with a lot going for it

We have a gay man in the series – and upon meeting him, Mina is instantly envious because he can hide his “difference”. Yes, a grossly homophobic praising of the closet (especially since he was tormented and imprisoned for being gay). He is also petrified of heights after an escape with the Iron Duke – of course, despite going through the same thing, the manly Rhys is not similarly afflicted with actually vomiting from fear.

It's sad really, this book had a lot of potential. And I will read the second book in the hope that we dispense with the unremitting rape tropes, and we can enjoy what looks to be a wide, wonderful world and some exciting story telling. But in this book? I cannot enjoy it. The “romance” is so gross, has so much constant dismissal of consent, contains an outright forced sexual assault and then Mina falling in love with him after it, that it's impossible to divorce the story from that. And because of that, we have to give it a low rating. Without it, we would have probably given it a 3 or 3.5 - but this trope is so gross, so overdone that we just can't - can't approve of it, or praise it, nor can we really say the story or the world makes up for it.