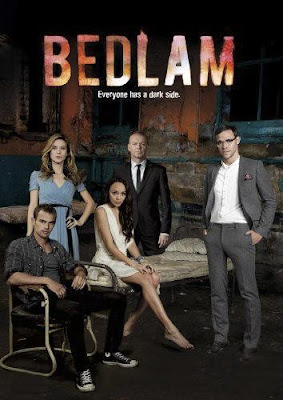 We begin with Kate and Jed sniping at each other – both kind of on the out of line side – I don't think the argument shows either of their stellar side. Jed lashing out at Kate because of what her dad did and Kate lashing out at Jed because she hasn't slept well, is in an arsey mood and is, well, Kate. Yes Kate is still sleepwalking and seeing women killed with bags over their heads – which I assume links back to the missing women we heard about from grace in the last episode.
Kate decides to blow off steam with her married lover (just in case we've missed the coding about Kate not being a very nice person – see, she's wearing a slinky red dress and going to seduce a married man?! Jezebel! Hussy!). Ugh, I don't like this I really don't. We've already established how nasty Kate and be, she's dismissive and insulting to Ryan and Molly, she's downright vile to Jed at times and in the last episode she was all kinds of nasty to Sadie. She's nasty, we get it. Now can we not use extremely sexist sexual coding to make her the devil woman. We don't need it and it leaves a bad taster in the mouth.
Kate's in a bad mood and Warren (Evil Dad) decides to cheer her up by showing her an old film of her granddad performing experiments on people. Kate, not being irredeemably evil, doesn't find this overly comforting. She does, however, go and scope his wife's lover – and reveal their affair without revealing herself.

Jed and his side-kick, Ryan, go to Grace's funeral to pump the mourners for information – but it seems Warren (that's Kate's Evil Dad) is the only one present. But fear not, Jed has ghost vision and sees Grace was killed with a plastic bag – and Jed thinks Warren has done it! And to make sure we're all clear about this, Warren goes poking around their flat and spying on their research when they're out. Jed and Ryan (Ryan's even turning down work now to do ghosty research) do their own research into the missing girls Grace found.
This episode we have the creepiest of the creepies – spooky children. Spooky children with spooky dolls as well. Yep, my heebies are jeebied. Molly has a new guy she's flirting with and she's helping with his daughter, Ella – yes, the haunted heebie jeebie child. A child whose ghostly friend is being coerced by a “bad man.” I'm glad that, while Molly goes to Jed the ghost whisperer, they also consider the possibility of someone hurting Ella.
And we find that Alice, ghostly girl, is trying to lure Ella off to play and into danger. Yes again with the creepy.
I'm glad that Molly is always involved through her own interest – it's her friends who are targetted, her love interest etc. She's never really dragged into a plot against her will, but she does seem to end up with a lot of the waifs and strays when we see her. But I'm glad it's her own story and wishes that get her involved, rather than her been dragged in someone else's wake.