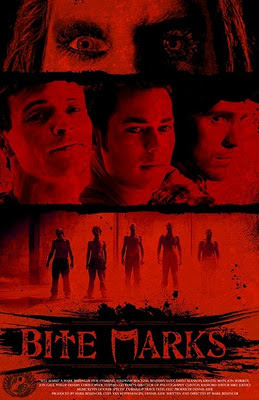 Bite Marks amounts to 1 hour and 24 minutes of my life that I will never ever get back.  In fact, I am doing this review so that you will spared, losing any of your precious times watching this movies.  Grooming my dog, doing laundry, relining the cupboards, and moping the floors would have been a far more productive use of time and quite frankly 10 times more entertaining than five minutes of this movie. At this point you're probably thinking, tell us how you really feel Renee.

This movie is particularly frustrating because it was originally written for straight characters but the director decided to switch to gay characters in order to make it appealing to a gay audience.  This of course made room for all sorts of ridiculous tropes to appear.  Man sex on film does not suddenly turn a crappy movie into a good movie.

The film opens with Brewster attempting to have sex with his brothers wife.  I say attempt because in the middle of it he loses his erection.  He gets a call from his brothers Walsh's boss informing him that his brother did not show up for work and unless he covers his shift, he is going to be fired.  Brewster decides to go because his brother owes him two hundred dollars and he assumes that if he loses his job, that he will never get his money back.


The scene then switches to Cary and Vogel, who are boyfriends that are hiking across country in an attempt to grow closer together as a couple.  Cary wants a close monogamous relationship and for Vogel to be able to say that he loves him instead of me too, whenever Cary says I love you.  When they come to a highway, they decide to hitchhike for awhile because Vogel is tired walking.  Even though Brewster is headed in the opposite direction that they want to go, they hop in his truck when he pulls over.


When they pull the truck into the listed address to drop off the coffins that Brewster is hauling, they learn that not only do they have the wrong address, but a broken axle.  This means that they are trapped there, until they can get a mechanic to come out and fix the truck.  Weeeee, let the vampire dodging begin.

Predictably. the vampire crawls out of the cab of the truck and starts looking for fast food. but luckily, Brewster's brother is religious and they have a bible handy. They tear out the pages and tape them to the windows, in the hope of keeping the vampires out until the sun rises. But oh oh, Brewster has to pee, he couldn't possibly soil his pants, so he opens the door and starts to urinate. and of course this draws a vampire.  He ends up urinating on the vampire. but is not eaten because he ingested holy water earlier, which turned his urine into holy urine, thus burning the vampire.

Obligatory sex scene out of the way, Cary and Vogel go on to kill all of the vampires.  They can accomplish this despite having no real fighting skills, because the vampires are not only slower and weaker than humans, they are all far from bright. The vampires in this movie might as well have been zombies, for all of the action and excitement that they added to the film. I don't get the point of adding supernatural characters to the film and then making nothing about them supernatural.

It is obvious that the director Mark Bessenger had a tiny budget to work with given that the special effects largely consisted of throwing fake blood all over the place and he hired terrible actors.  With the exception of the fake orgasms, there wasn't a single believable emotion captured on film. There are currently better youtube videos than this film, which was rather ironic, since Vogel spent much of the movie capturing vampires on video to put on youtube.  The dialogue was forgettable and the characters made assertions about the nature of the vampires that came completely out of left field, but I suppose Bessenger had to find someway of letting us know what the vamps were up to and what their limitations were. Why build tension and suspense, when you can just do a good old fashioned info dump.

I do understand that this was never meant to be a serious film and more of a cult flick; however, even baring that in mind, how much of the earths resources were wasted so that Bessenger could see the screenplay he wrote become a film.  Kevin Smith proved with movies like Clerks, Mall Rats and Chasing Amy, that small budget does not have to mean bad. He also proved that just because a movie is ridiculously camp and juvenile (see Clerks in particular), does not mean that it cannot be entertaining.  On every measure on which a movie can and should be judged, Bite Marks, failed.

At this point, I have pretty much decided that you all owe me.  Now that I have let you know just how boring and ridiculous this film is, you can skip it, thus saving yourself one hour and twenty-four minutes. This is pretty much what I would call, taking one for the team.