Side Jobs by Jim Butcher, Short Story collection from the Dresden Files 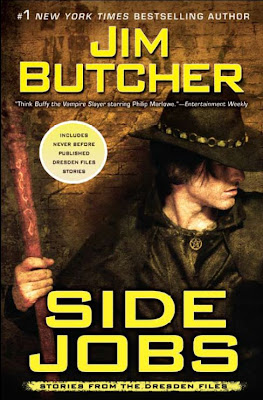 I approached Side Jobs with a degree of caution and a firm determination not to let my own biases sway me. See, I don't like short stories. I don't. I don't even like stand alone novels all that much. I like great big epic series with huge great meta plots and development and drama and on the edge of your seat excitement.

And while all those are possible within the confines of a short story, they're usually not there. I was especially leery of reading a Harry Dresden short story simply because the best thing about these books is the epic within. I don't think I've read an author that can match Butcher for the epic – but nor do I think you can build up to good epic in a short story.

And there was some mixed quality here. The stories were from every period in the series and while most of them were a hit (above and beyond what I expected), some missed badly. Restoration of Faith was pretty dull and clumsy and the second story Vignette isn't even a story. I actually wasn't too fond of many of the short stories that had Harry as a main protagonist because they kind of involved Harry just, well, doing what we've seen him do throughout the books but generally a bit more casually because this is his daily bread, as it were. And while it's nice to see his daily bread, it's not exactly a revelation – and with a good maybe 7 out of 11 of the stories being these daily bread style tales? None of them really adding development to the world, story or characters?

Not to say these stories aren't worth reading – they're amusing and interesting and have the same fun, great style I love in the books – and we do get some background information filled in on Gard, Michael and Billy and Georgia, albeit not exactly vital information. And “Harry's Day Off” is hilariously funny and it's probably worth reading for that alone. But they're not special, y'know?

Now, the two stories that ARE special to me in this book are Backup and Aftermath. These stories are not told from Harry's point of view – they're from the view of Thomas and Murphy and they are excellent books for developing those characters. We see far more about Thomas' struggle with his demon, what he actually does in his life, what the White Court does how he gets by and what he feels about people than we've seen before. Though, frankly, I am beyond tired of this “flaming gay hairdresser” persona, this needs to end and end now.

Similarly, with Murphy we saw a lot more of her mindset and struggles – how she, as a mortal, deals with the supernatural world, her attitude towards the sword, what she's learned from Harry as well as the less supernatural adaptations of being a short, blonde, female police officer in a manly dudebro world and the adaptations she has to make to that. I've wanted to see this for some time – to see how Murphy lives without being under Harry's shadow and see her more centrally. And her comments on Martian were most excellent to read. It was also one of the more emotional books, with a powerful sense of grief and feeling over Harry that didn't overwhelm the story but was still very profound.

But more, what made these books stand out to me is how they developed Dresden more than the books with Dresden in them. It's often easy to forget how powerful Harry is, how brave and dedicated and what he's achieved when viewed through his self-depreciating lens (as well as his frequent bouts of despair, panic, confusion and general flailing) and always in the context of some uber power he's fighting. See through his eyes you don't get a full sense of his power.

Seen through the eyes of Murphy and Thomas, and their fear and respect of his power, their awe for his power and their constant “if I were Harry I'd be able to do this...” notes probably develops Harry as a force and an effect far more than following Harry himself. And it's hard to develop the protagonist in a series that is this long – usually our perception of him is pretty fixed. It was an extremely elegant and effective way to give us a new light on Dresden.

I did feel distinctly dissatisfied with the ending. The last story was the only story current with the time line – and Dresden wasn't in it – still missing presumed dead. And after his deal with the Winter Court and all the epicness that rules in Changes I wanted to see some development on that, some steps forward and it didn't. Yes yes I'm frustrated... veeeery frustrated

Generally a good book, with the odd gem in it – and I can see how people would be attracted to the series after reading some of these shorts – but I want my metaplot epic back, yes yes I do.