Venom by Jennifer Estep, Book 3 of the Elemental Assassin's series 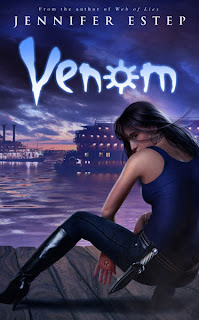 Gin's retirement doesn't seem to be sticking. This time Roslyn comes to her with nowhere else to turn, the vampire is being stalked by one of Mab's minions. The giant Elliot Slater. Her chief enforcer, he is a dangerous opponent with all the power of Mab behind him, the most powerful figure in the Ashland crime world. The authorities can't help her, justice and safety can only come from the Spider's knives.

And there's a new cop in town – honest, true, trying to do as much good as she can in a system that is corrupt and compromised to the hilt. Detective Bria Coolridge – Gin's long lost sister. Gin has to decide what to tell her sister, how to help her, how to protect her from Mab and her minions – while at the same time risking her profession as an assassin driving her away just as it drove away Caine.

And there's Mab. Mab who is looking for the person who killed her associates, who lurks behind everything in Ashland and who Gin has more than a few reasons to kill herself.

In some ways I am torn with Gin playing the mass murdering Robin Hood. I don't dispute what she's doing or her motives, but this book and the last book, Webof Lies she has spent being a pro bono helper to various people. Not a bad thing in and of itself, but we risked losing the focus on her own agenda, her own life and her own wishes.

Which is why I am very happy to see the emergence of Bria, Gin's sister. And she looks like a much more interesting character than Detective Caine ever was. Like the old detective, she's honest and good and wants to make a difference. Unlike Caine, she doesn't live in happy dappy cloud cuckoo land and pretend that the system is shiny, that it can fix everything and anyone who works outside the system is of the bad. Or at very least she has a sense of triage - “I know there are worse things , worse people in the world. I'll stop them first. Then, when that's done, maybe I'll get round to you.” and that line, right there, manages to perfectly have a good honest cop who isn't a naive fool in the situation. She looks like she's going to be a strong, capable character who can handle herself with her magic and firepower, has her own agenda and isn't willing to be cowed or intimidated. I'm also glad that Bria will work with Gin and the two get along rather than us having a convoluted “I hate you hate you hate you – oh you're my sister? LOVE YOU MY KIN!” moment. Yes I've seen it before and yes I've side-eyed it :).

I am very glad to see the opening salvos against Mab. With the preamble of the last 2 books over with, we have focused on Mab as the enemy and Gin has given up pretence of retirement. Mab killed her family, Mab is hunting her sister, Mab's minions have hurt her friends and Mab... is going down. I loved the first blows she struck and I'm looking forward for more.

Gin remains a strong, capable character who isn't intimidated, is generally intelligent without the usual ridiculous decision making we see in the genre. She's confident, self-controlled, sensible, strong and intelligent. On the whole a great character I like a lot.

I even like how Roslyn's strength is portrayed. Even though she is being stalked by one of Mab's henchmen and is in a terrifying and helpless situation, she is still strong and her fear is never portrayed as weakness, her victimisation never blamed on her nor is it seen as her being incapable or fragile or delicate. She's a victim but her strength is emphasised even then. Really I think all the female characters in this book are very different but all are very strong people.

There was a lot of violence against women in this book – Gin had to take a beating and Rosyln is stalked and abused. But they never downplay the stalking of Roslyn and how, even when it isn't violent, how disturbing and frightening it is, the stalking is treated as seriously as it is. And it helps that both Gin and Roslyn kill their abusers which is always heartening to see.

I suppose I should mention Owen, the love interest. So far, so good I think – Gin is, naturally, still thinking of Caine, but we're not having pages and pages of angstfests over him (thank gods). Owen is much better at accepting Gin's nature and actions which means we can be treated to a relationship without angst and unnecessary drama. His reasons for accepting her are, well, reasonable, so it's not just a case of “I love you so don't care you're a mass murderer!” and they haven't gone that tiresome route of love at first sight/woo-woo/shag. Not going to give it the thumbs up yet because we know very little about him, but there's a positive there.

After the last book, I was disappointed. I wasn't after this one, we're back on track and moving in the right direction that promises much epic to come. Even more, now that the battle with Mab has been declared I have high hopes for the next book furthering the meta and the epic.