The Dead Girl's Dance, by Rachel Caine, Book 2 of the Morganville Vampire series 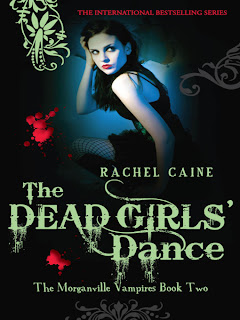 At the end of the last book, Glass House, Shane called in his father in a desperate attempt to save them from the wrath of Morganville's vampires. Of course, they managed to escape that wrath by earning the support and protection of Analee, the Founder of Morganville who had enough clout to keep them safe.

The problem is, Shane's father and his vampire slaying biker gang still arrived. And they're still looking for blood and they don't intend to leave without slaughtering as many vampires as possible, preferably all of them. In fact, it seems this was Shane's reason to return to Morganville anyway – to gather as much intelligence as possible in the eventual attack.

Shane's father instantly launches a path of destruction, killing vampires wherever he can. Worse, he has no concern for collateral damage and his gang does not hesitate to kill humans who look like vampires – even resorting to kidnapping humans to follow their plans.

And worse still, Shane is quickly implicated in the killings. The penalty for vampire slaying in Morganville is being burned alive. Claire, Michael and Eve must find a way to convince the vampire authorities that Shane is not guilty and they should spare his life.


Like the first book, one of the biggest barriers I found to enjoyment was the utter foolishness of the characters, especially Claire. See a dark and shadowy alley that 3 people have now told her not to go down and what does she do? Why down she goes.

I think the prize goes to her seeing Shane's father in open, public conversation with the Bad Guy (proving that they may actually be even more foolish than she) near the beginning of the book and it's only chapters and chapters later that she stops and thinks “oh, was that relevant?! Why yes, I do believe it was!” Since realising this blatantly obvious fact just a little sooner may have solved so many problems.

Which brings us on to the story which seems to involve Claire & co flailing around randomly in response to stuff happening but not actually achieving an awful lot. They do things but it doesn't actually get them anywhere or achieve anything beyond Claire displaying just how foolish she is as she tries everything from wandering around at night to trying to swear allegiance to the big bad vampire to her and Eve deciding that what the vampires and police really need is unarmed teenager backup.

To finish off, the meta plot is not really advanced. Except for Michael's changing status (which is incidental to the story) we finish the book pretty much where we started it. I'm not even left with a sense of having moved the story on. Really the title says a lot about this book - because it refers to less than a chapter of action. It's a testament to how little there is to say about it

I found this book generally worst than the first book – the first book had the advantage of revealing a new world for us to explore – but this doesn't take the explorations any further. The plot is not involved or character driven, and the characters annoy the hell out of me.