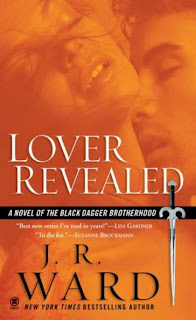 Our latest adventure with the Black Dagger Dudebros follows Butch, the human ex-policeman who lives with the Brotherhood and his long distant love affair with Marissa, King Wrath's ex-shellan who he first met in Dark Lover

After months with no contact during which they mistakenly think they both hated each other, Butch is forced to share a long quarantine with Marissa after a painful encounter with the lessers and the Omega himself. They rekindle their old love, but Butch is permanently infected by the darkness of the Omega and fears endangering her and the Brotherhood.

Butch also has to wrestle with his own demons – his past, his family and the problem with being a human living with the Brotherhood. As he increasingly feels himself as an outsider and an interloper in the lives of the Brotherhood who, as a human, cannot aid them in their war against the lessers, he questions his place, his continued living with them and even his continued purpose and existence.

He certainly questions if he can be good enough for Marissa, pure blooded aristocrat with impeccable lineage and station. But Marissa herself has to find her own place with Butch, overcome her deep sense of inadequacy and faces vampire society's push to sequester all unmated women for their own protection

An old prophecy has also arisen – the legend of the Destroyer – no, sorry, the Dhestroyer (no, really) – which may be the key to ending the lessers - and the Omega – entirely. But with the darkness of the Omega help Dhestroyer kill him, or lead to Dhestroyer himself being consumed


Yet again, and I have to say it, I am vexed by how little attention the Black Dagger Brotherhood actually pays to the lessers. They go out, they hang around bars and clubs and hope the lessers attack them, or, should a civilian be attacked, they rush to respond as fast as they can. There's very little pro-active battling the lessers and, really, if the lessers weren't almost equally incompetent/inclined to fight each other the fight would probably be over by now. I would love to see them doing more for the actual war, rather than it being a footnote.

This book also makes excessive use of that romance trope I hate so much – the ridiculous misunderstanding. Butch and Marissa's relationship over the past 6 months and in this book has been fraught with neither of them sitting down and explaining themselves. Instead we get misunderstanding, hurt feelings and pouting. I've never been a fan of the trope, I have to say.

I'm also tired of absolutely everyone in this series having a deeply tragic past. Everyone. All the Brothers, all the women the Brothers love, everyone has a tragic past. Someone open a window and let the angst out.

Story-wise, I was pleased to see some meta-plot developing with the Destroyer prophecy. I also find John's continued developing story interesting and worth reading. Both show signs of being interesting and more advanced plots beyond “vampire meets woman” plot lines that have generally been very similar and not especially deep. On that note Butch's and Marissa's relationship does not fascinate me, since all the conflict in it is based on their low self-esteem of not being good enough for each other. I'm hopeful that future books will focus more on these developing meta-plots and a little less on the engorged/throbbing/wet/tumescent etc etc. For this developing meta, I'll give it more than previous books.

And I have to address the tropes – not just of this book, but the series because they started in Dark Lover and have kept up through them all.

There are a lot of prostitutes – many many prostitutes in these books – and they're all completely anonymous non-people. No names, no character, they walk on, get physically described, perhaps used, and walk off. In many – perhaps even most – cases they're also victimised. Murdered by Lesser serial killers, fed on by one of the Brothers etc.

Now turn round and look at the heroins – for the most part they're sexually inexperienced, sexually uninterested or outright virgins before meeting their Twu Luvs. If that wasn't coded enough – the Goddess of the vampires, the one they pray to is called the Scribe Virgin.

Not, of course, that these pure adored women are not victims – they get names and get to be adored but all of them have either been attacked and kidnapped or are presented as deeply tragic, vulnerable and tortured. The one strong, kick arse, independent, doesn't need a man to rescue her/hold her hand we've had so far in the series is Xhex (yeah I have no idea how to pronounce that either) who repeatedly has her gender doubted and is called a “shemale”.

Vampire society/as a species is also deeply misogynist. Men create “bonding scents” that marks the women as theirs and go into mad rages should another man touch their women. Women are treated as fragile little flowers or children – there's a tradition of cohntehst (I know I know, the extra hs again) where 2 men fight over a woman and sehclusion where a woman basically becomes the property of her male relatives who control everything she does. The aristocracy even tries to make sehclusion automatic for all unmated females and while Marissa opposes this, she opposes it primarily due to domestic abuse victims who would have no help under such a system rather than because women are quite capable of running their own lives. Her objection is primarily founded in the vulnerability of women, not the assertion of their right to be independent.

This book also continues with the same casual misogynistic and homophobic language we're so used to.

And finally, no book review of the Black Dagger Brotherhood would be complete without a mocking of the names and language. In addition to Dhestroyer (new name) a prize has to go to the word phearsome a term referring to the “potency of a male's sexual organs”. Yes, I'll present that without comment I think.