Review of Jabril by D. B Reynolds 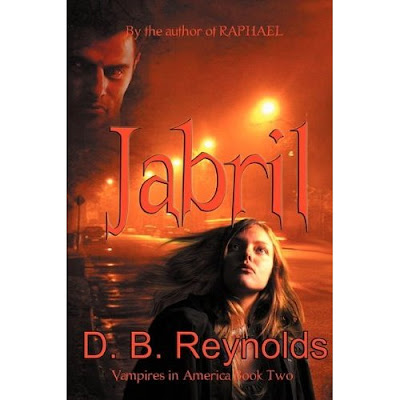 Having read Raphael, I went into Jabril with extremely low expectations.  I must admit that I was mildly surprised with Jabril; however, Cyn, the protagonist, once again found herself mixed up in vampire intrigue, but this time it was at the behest of the master vampire Jabril.  Cyn was initially hired to search for a missing girl, not because Jabril believed in her prowess as an investigator, but to irritate his rival Raphael.


Jabril Karim Al Subaie was the scion of a very traditional and conservative Arab family who'd been allies of the Saud dynasty for centuries, longer than even Jabril had been alive.  He demanded respectful and submissive behaviour from his servants ... and his women. (page 19)

Those scant few sentences should have served as a warning of what was to come in this book.  Of course, being an Arab man, Jabril was not enlightened enough to see women as his equals.  He had no female vampires in his guard and abused and raped all those he used for the purposes of feeding.   To make sure that the reader was appropriately horrified, Jabril spent the entire book either abusing White women, or trying to abuse White women.  Two beautiful young blonde haired blued eyed young girls absolutely needed to be saved from this man.

Of course Cyn saw how wrong this situation was right away:


The young woman was treated like an ill favored pet and made to dress as if her femininity was something shameful to be hidden.  Cyn didn't care how old the vampire lord was or where he he came from.  That kid was young and scared, and those big, blue eyes had been born in America, or Cyn would eat her boots. (page 25)

To ensure that Mirabelle, the only female vampire on Jabril's compound did not create undue lust in the male vampire population, she was forced to dress in black and wear an "ankle length skirt, t-shirt and loose black sweater, even a scarf to hid her long blond hair.  Her shoes were black Nikes, and she wore black old lady socks that rose above her knees."

Do you get it yet?  D.B. Reynolds made a point of making Jabril Arab, and then she had him abuse White American women and show absolutely no respect for them as individuals.  This wasn't even veiled Islamophobia.  The author might as well have said hijab, instead of scarf, because everything that Reynolds wrote pointed that way. At times, Reynolds laid her bigotry on so thickly that it felt like getting hit with a hammer repeatedly.  Now that the Middle East is home to our supposedly new boogeymen, they are constantly appearing in movies as the most evil of big bads.  It's becoming worse than the eighties, when every villain was Russian. Ironically, the dashing male lead in this series is Russian.

Okay, so at some point I am supposed to talk about the story right?  It was actually hard to get into, because Reynolds kept stopping to remind us that Jabril was Arab and a raving misogynist -- which by the way is supposedly so much better than the male hero, because he only went as far as to put tracking devices on Cyn's car without her express permission and demand that she have a 24 hour around the clock bodyguard, when she dared to leave his presence but hey -- he's a good one because he wuvs Cyn.

See, I did it again, another tangent instead of telling you about the book.  Can you tell how irritating the fails were?  Okay, so Cyn realizes that Jabril only hired her to irritate Raphael, and that the sisters which he has assumed ownership for since their parents death are being abused and bilked of their inheritance.   This of course brings us to on of the two positives in this entire novel - Cyn is no wilting flower or false heroine. She manages to find out who the serial killer is that is murdering young teenage runaway, thus exonerating Raphael. Not only does she kill Jabril when he arranges to have her kidnapped, but most of his vampire retainers, leaving the territory free for a future power struggle.

I do however find it hard to reconcile the Cyn who is capable of killing off a bunch of vampires, with the woman who has no problem giving up her business for the love of a man.  How is it that this supposedly empowered woman made this decision.  Possibly, the author saw it as plausible because being independently wealthy, Cyn was not dependent upon Raphael for money, but giving up her job because of his insecurities, undermines all of the work that Reynolds did to establish Cyn as a capable modern woman.

The other point I really enjoyed in this story were the teenage street kids.  Reynolds did an excellent job of talking about their vulnerability and how quick society is to discard them.  When Cyn was investigating the missing runaways, Reynolds had her hand out coupons for food.  Cyn even showed a genuine regard for the world that these teens inhabit, and a firm understanding that trust was something she had to earn, rather than be given.  The homeless regardless of how old they are, do not often feature in urban fantasy, and so I found Reynolds approach to be a positive statement on the class divide, as well as the mistreatment of children.  Mirabelle and her sister were vulnerable because they were women, but more importantly because they were legally minors. They couldn't make any decisions about their lives, though they were the ones who had to pay the consequences for the decisions others made for them.

In the end, I would say that Jabril is a much better book than Raphael, but that isn't really saying much is it?  If Reynolds hadn't packed the book to the brim with so much fail, it might have been a really interesting book. Up until Cyn gave it all up for love, she really was a one of the few models of a positive female character in the genre.