Alexander Skarsgard in OUT Magazine 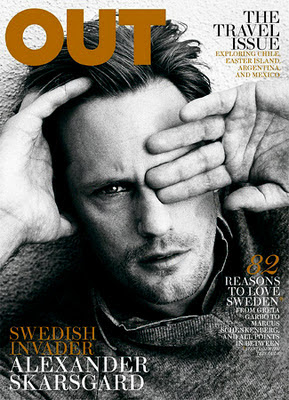 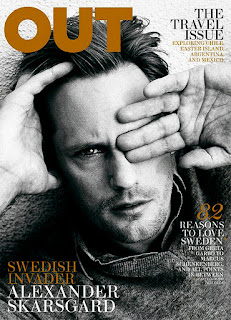 The star of True Blood and Lars Von Trier’s upcoming Melancholia talks with the filmmaker about the Swedish conquest of Hollywood, national differences in etiquette, and why Swedes get so much sex.

What is it about Sweden that is making this far-flung country of less than 10 million people so culturally relevant right now? From Robyn and the Knife to the The Girl with the Dragon Tattoo, Sweden has leaped ahead of its European neighbors and infiltrated America’s mammoth entertainment machine. We invited Alexander Skarsgård, best known for his role in HBO’s lusty drama True Blood, to sit down with director Jonas Åkerlund — whose seminal videos have included Madonna’s “Ray of Light,” Christina Aguilera’s “Beautiful,” and Lady Gaga’s “Paparazzi,” (which starred a then–largely unknown Skarsgård as Gaga’s paramour) — to help answer the question.

Out: As Swedes abroad, both working in the entertainment industry, you must feel like the go-to spokespeople for Sweden.

Alexander Skarsgård: I love my country. I always love talking about it, especially as an expat. When you live there you bitch about everything, but when you move away, all you remember is how amazing and wonderful it is. You remember all the sunny days and forget the rainy days.

Jonas Åkerlund: It was very rare to hear about Sweden, period, when I moved to Los Angeles in 1996. You were still mixed up with Switzerland. Now there’s Swedish music everywhere, actors and directors, everything, everywhere. And it didn’t used to be like that. You were very happy and proud when you heard Ace of Base on the radio.

Skarsgård: Not to mention all the songwriters and producers, as well as the musicians. Every other song on Billboard seems to be produced or written by a Swede.

Åkerlund: The one profession that was left behind was filmmaking, which is now catching up a little. Music and fashion has been out there for a while, but lately I’ve also begun to notice Swedish co-producers and directors working abroad.

Skarsgård: The reason I went to L.A. a few years ago was because the young interesting filmmakers didn’t get a chance to tell their stories or do their movies because the older generation, who were pretty mediocre filmmakers, were the only ones making movies in Sweden. That’s changed so much now. I’m excited about going back to Sweden to work with young, cool Swedish filmmakers. It’s really a vibrant industry. And now, for the first time, there are a lot of Swedes working on Hollywood projects, often on super low-budget films.

Åkerlund: But it becomes a trend — everyone wants a Swede now. Getting that opportunity is one thing, but living up to it or holding onto it is another thing.

Skarsgård: Exactly, we’re like the flavor of the month. Next month it will be Finland.

Åkerlund: Oh, never say that. Never Finland. It’s interesting, though, Alex. I met you at the Chateau Marmont. We looked around and there were, like, 10 Swedes around us, and not one Finn, no Danes. Wherever you go there are Swedes. But I rarely meet other Scandinavians. 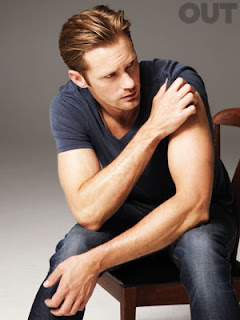 Out: Is there anything that helps define a Swedish sensibility or identity?

Skarsgård: I think it has to do with minimalism in terms of everything. There’s a lot going on under the surface. It’s something hidden. And that’s always interesting to me. You have to dig deeper. It’s like a duck — calm on the surface, but paddling like a motherfucker underneath.

Åkerlund: It all depends on where you are in the world. It’s easier for a Swede to stick out in America than, say, Italy or France, because their personalities are so different. The one thing we learn is we don’t really talk much about what we’re doing — we just do it. And that’s the biggest difference between us. In America, people talk a lot. I never talk; I just work. To me, to be on time and to deliver on time and stay on budget, and not just say, “Let’s do lunch,” but actually call up and book a lunch — that makes you different.

Skarsgård: There’s something about the sincerity that I miss in America. When someone asks, “What do you think of this painting?” or “How do you like these shoes?” I would take a second and actually look at the shoes or painting and say, “I like it.” Some people are kind of uncomfortable with that. When you ask, “How do you like my shoes,” they say, “I LOVE THEM.” They say, “YOU LOOK AMAZING; I LOVE IT!” At the same time, the reason Swedes can hold back is just because they don’t want you to think that you’re special or great or better than they are. At least when people in the U.S. like something, they say it.

Read the rest of the interview here
Posted by Renee at 4:20 PM