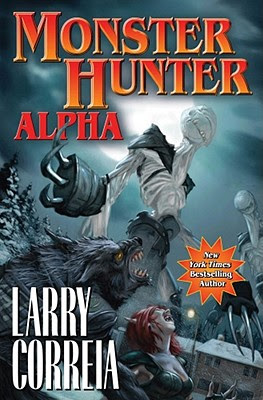 Unlike the previous books, this book follows Harbinger. Harbinger is the de-facto leader of Monster Hunter International – and has been for 100 years. He has been hunting monsters for all that time – for his company, for his country and when various powers that be hold a dagger over his head.
Because he’s a werewolf. One of the few monsters in the US that is exempt from the bounties – and he’s earned that by being a weapon for war used and abused by the US for a century. But these battles have left him with old ghosts and old enemies – and when he finds out that a Soviet werewolf he’s fought in the past has come to the US, he feels driven to hunt him down. Of course, he doesn’t want to drag Monster Hunter International into his personal business, so takes a long overdue holiday.
It isn’t the most restful holiday ever. Upon arriving in northern Michigan he finds that Nikolai is the least of his problems – old magic has risen, there are new werewolves everywhere, werewolves that aren’t following the rules, zombies, giant monsters of the old ones and an entire town on the brink of destruction.
A winter storm has blown in, the electricity is cut off, all communication with the outside world has become impossible and people are dying in droves. Harbinger is facing a rising body count, a rising monster count, a brand new werewolf ally, his old Soviet enemy, a major new power, a corrupt member of the Monster Control Bureau and an amateur hunting organisation looking for bounties and not shy about how they get it. And just when he needs his strength the most, it fails him.
And, of course, the very future of the world hangs in the balance.
Epic.
Yes, that one word. This book is epic. Epic and exciting in a “stayed up all night couldn’t stop reading on the edge of my seat” kind of exciting. I couldn’t put this book down, I resented every second I spent not reading this book and following this action packed story.
And it has some truly epic scenes. Fighting the alpha in the mine shaft. The horde of zombies being fed into an ice-cutter. The anti-tank gun. This book is like an action movie with awesome fights and amazing explosions and I’ve never seen a book do it better. And I don’t even generally like action films, but the scenes are so well done that I’m drawn in to the glorious battles. It would be an insult to this book to call it an action novel because there’s so much more – but the battle for survival is truly epic and wonderful to read.
Also, unlike most action books, it's not linear. We have a variety of actors, each with their own goals and twists to make Harbinger's job that much harder. Nikolai has his own aims, there's Brightwood, the new, amateur hunting organisation lead by an extremely unpleasant man and his crew of ex-conns looking to pick up some PUFF money. There's Agent Stark, the MCB bureaucrat, burnt out, a coward and generally in it for himself and his idealistic hero partner. There's the big bad that is behind it all - and, of course, there's Heather, deputy for the local police and most unwilling to have her town destroyed by werewolves. Each of these stories is compelling in their own way. At one point I thought they'd be distractions from the main plot of Habringer vs Nikolai, but no, they add to the plot and they go together extremely well.
We’re also seeing a lot of wonderful world building and meta happening here. There is something big and dark coming, the old gods, event on event. It’s not just monsters each book, there’s an overarching plot that is growing. And the world is growing – we have a full rich history for werewolves, they’re not just woo-woo manbeasts, we have a full story and backstory behind them
And the characters – I do so love the characters. I was surprised that this book followed Harbinger and not Owen – I actually thought it would ruin the mystery. But harbinger is such an excellent character, very human, with a full history and well presented without infodumps no less) a super hero without being corny, powerful without being invincible and impossibly good, good without being flawless. The only thing that makes him not the best character in this book is Heather

Because Heather is awesome. Strong, powerful, determined, human. She can kick arse without being super human, she’s not flawless, she’s not without confusion but she’s a really fun character – and she and Harbinger bounce off each other extremely well. She’s stubborn and she’s willing to get things done and she’s flexible and generally a character I dearly hope will be returning.
Even the bad guys – and Horst is pretty irredeemable – are still very fleshed out and real. They’re not moustache twirling evil or the sake of it, they feel like real people, like actual people. Not very nice people by any stretch, but still very much people.
Diversity wise this book was a lot less racially diverse than the previous books. In the past the Monster Hunters have been from a variety of races, but here we only have Harbinger and the town is very white. As before there are no GBLT characters – but there is some anti-gay hate speech. Yes it’s from a bad guy, but no it’s not challenged and yes, it’s unnecessary, especially in a series that erases us. There's also an ongoing libertarian and gun-loving streak in the books that does not appeal to me
All in all, this book is on my keep list, and probably on my re-read list. I can’t wait until book 4 comes out.