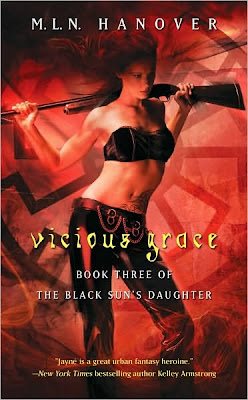 I suppose the best way to describe this book is to say that it is about the loss of  Jayné's innocence.  With Y.A. you get young protagonists and if the author is good, over a series of books you get to see the protagonist mature to someone who is less angst ridden and sure of themselves.  When we first met Jayné she was a college drop out who discovered that her uncle had left her as the sole heir to his fortune.  Jayné spent the last year with her associates traveling the globe trying to unravel Eric's secrets. So much of her life plan was absolutely dependent on completely Eric's work that when it became clear that Eric may not have been the man she thought.
It all began with a call from Kim, the ex wife of Jayné's current lover Aubrey.  Buried under the hospital that Kim currently works at, a creature is trying desperately to escape. Jayné must decide between freeing the creature as her uncle Eric wanted, or entombing it again.  Jayné is at a complete loss because it becomes clear that the end of the mission will mean the end of the comfortable little family that she has embraced for the past year and all good faith in Eric.
Honestly, I found the entire thing to be angst ridden.  We have Jayné struggling to defeat an uber demon, but falling apart over the revelation that Eric caused the end of Kim and Aubrey's marriage, as well as raping Kim and nearly destroying her career in the process.  She is racked with guilt for actions that she did not commit, and at the same time worried about losing Aubrey. When she should be focusing on the task ahead, she focuses her attention on Aubrey.  I will however through in that I was glad that M.L.N. Hanover did make a point of saying repeatedly that Kim was raped, because she did not consent to what Eric did to her.  That was a pleasing surprise, because woo woo is often used to over look acts of violence against women in this genre.
For all that is going on, Jayné is still working on her masters degree in spunky agency.  I think what irritates me the most is that this time it is explained by the possibility that she might lose Aubrey.  Wrapping a reason around it does not lessen the fact that it is spunky agency.  I also think that it's worth noting that in the previous books, no logical reason was given for Jayné running head first into danger.  This is her modus operandi despite the broken heart schtick that  Hanover employed this time.  Part of having a character squarely inside of the Y.A. genre is that they are supposed to grow over a series of books. The following is from pg 34:

I knew I had a style. A set of habits that I feel into, time after time. I rushed in where angels feared to tread as a matter of course. I'd done it when I burned by bridges at home and gone to a secular university.  I'd done it when I'd gotten involved with my first real lover and his friends and again when I left for Denver after that all fell apart. I hadn't known what I was doing when I went against the Invisible College.  When we'd gotten into the mess that had been New Orleans it had been me in the lead charging ahead without knowing what I was charging into.

Jayné  went to the trouble of admitting that and instead of changing her behaviour, she decided to confront a demon without telling anyone who could help her in case things went wrong. How exactly is this time different and when are we actually going to see some maturity from Jayné. That this ended up with another case of all's well that ends well is yet another sign of authors in the genre disempower their female protagonists while claiming to give us strong women to support.
The other real contention I had with this book was Hanover's decision to turn the Nazi's into demon riders.

"There's still a lot of debate about what exactly Himmler was up to when he rounded Ahnenehrbe," Ex said with a shrug, "but we know for a fact that he was deeply into riders.  We know that part of what happened at Dachau was ritual death magic." (pg. 116)

The Second World Was was a battle between a flawed, struggling human resistance and a force of pure evil.  Its the same struggle that's going on right now.  Whether you choose to acknowledge it or not.  It's the job you've take on.  It doesn't matter whether you think of Hitler and Goering and all the rest as evil men or evil spirits in human form.  They're still evil, so they're the enemy. (pg 116)

That connection was absolutely not necessary to tell this story.  It is appropriation pure and simple.  The Nazis should never be thought of as anything other than pure human evil and the very notion of the devil made me do it, that Hanover is attempting to play with diminishes all those that died and suffered under their hateful regime.
Vicious was basically about Jayné figuring out she is, because she had to deal with the loss of her  hero, to finally understand that she had to build her own identity, free of outside influences.  Like many young people however, she still sees life in very Black and White terms rather than in shades of grey. It the next book I highly suspect Jayné will be on a journey to figure out what she is, now that it has become clear that there is more than a simple spell causing her to be able to fight off spirits.