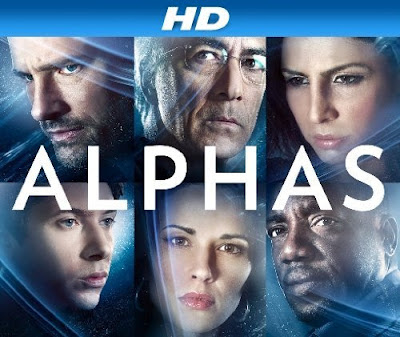 This episode opens on the subway with a riot.  People start fighting and a cop is shot dead but there is no explanation for this mass hysteria.  The alpha team is brought in and Rachel picks up weird from a teddy bear. After watching the surveillance video, they focus in on a young woman as responsible for the violence. Lee believes that she is releasing pheromones which cause people to lose control and become violent.

They manage to track her to a halfway house but she gets away and instead they capture Matthew Hurley.  When they take him back to the office, he tells them that they are looking for his sister and that he is immune to the effects of her pheromone throwing. Lee believes that his immunity is based in his constant exposure.  Gary discovers that she has brought a ticket for a bus but when he goes to tell Lee, Don Wilson is talking to Lee.  Don is not patient and wants the girl contained and brought to Binghamton immediately. Bill then escalates the situation by announcing that the girl they are looking for is not Hurley's sister.  Lee realizes that they alpha is actually Matthew but before he can warn anyone, Matthew releases another round of pheromones causing everyone to lose control.  A fight breaks out, Rachel who was on the phone at the time ends up screaming at her mother for the first time.  The fight continues to escalate with punches being thrown and Bill is the only one who manages to stay in control.  Don ends up being shot dead by another federal agent.

When they get to the bus terminal, Matthew is already there.  He tells Tracy that everything he did was for her.  I have to say that I was so happy to see Tracy reject this and tell him that he had to stop.  It would have been so easy for her to buy into the myth that her love had the potential to change and save Matthew.  Matthew refuses to turn himself in and releases yet another round of pheromones.  A small riot ensues and he hides on a bus until Bill boards and knocks him unconscious before he can escape.

Back at the office Bill chats via instant messenger with handler Nathan Clay who makes it clear that he does not see the alphas as human beings.  What he does not know is that Lee is using a video camera to record everything he says.  Lee makes it clear that the alphas are human and that Matthew is to be treated with respect, but Nathan continues to be dismissive and then simply ends the contact.

In this episode we learned a bit more about Rachel and Hicks private lives.  Though we learned in the first episode that Hicks was going through a divorce this is the first time we learn that he has having issues seeing his son.  Lee tries to reassure him that no matter what that his son will always be his son.  We also learn that stress effects Hicks' abilities.  In terms of Rachel, part of the reason she is on the team is to work on her ability to be assertive.  As part of the fallout from the pheromones, she told her mother to shut up and that she was moving out.  It took pheromones for Rachel to assert herself.  I am not fond of this in the least because having the lone woman of colour on the show be the passive one is very much a trope. It didn't help that this was furthered by having her decide to move in with Nina.

I liked that Gary Bell continued to assert himself regarding his discomfort in the office.  It bothered me however that the team was more than willing to ignore the hum that he was complaining about and that Bill outright mocked him.  He is absolutely indispensable to the team but from the way that he is treated it is clear he is not thought of as an equal.  It is only when Lee gives the team a rallying speech the Hicks takes down the satellite dish that was creating the hum.  Gary should not have had to assert himself repeatedly.  Hicks should have acted before Lee gave the speech. I see the teams willingness to ignore Gary's issues even as they attempt to help each other as absolutely ableist and I think that if the show is going to go down this road, they need to acknowledge the ableism that is happening here.

I still feel that this show is not very original.  In the last episode I compared Alphas to X Men, but perhaps a better comparison is Heroes. Alphas, just like Heroes does not rely on a lot of special effects, and instead depends on storytelling to get its message across.  Even though for me, Alphas still very much has a been there, done that feeling, but despite that I still find Alphas compelling to watch.