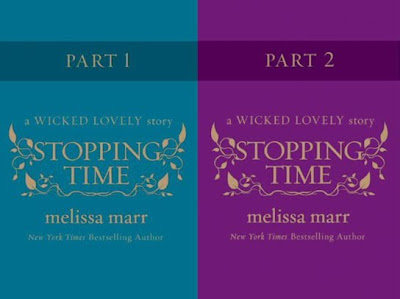 Stopping Time is a short story, about 50 pages long, and a continuation of Leslie’s story after Ink Exchange with both Irial and Niall looking on.

And there were parts of that story that would be interesting to continue – Niall as the new king and what Irial’s place in the hierarchy is. How is the Dark Court developing and changing? There is such a lot to explore here, such a lot of depth and politics.

None of this was continued
Instead we followed Leslie and her non-relationship with Niall and Irial. And I didn’t like it – to me it undermined so much of what I liked about Ink Exchange. At the end of that book Leslie’s story, at least so far as the fae was concerned, was finished. Leslie walked away. In a brilliant representation of strength and survival and independence and agency, Leslie saw that relationship with the Dark Court, with Niall, with Irial, was destructive and dangerous and not something she wanted. She walked away. Going against a thousand tropes screaming that a girl should stay with the guy for twu love no matter how dangerous, abusive or unhealthy he or the relationship is, Leslie said No. Leslie walked away. Leslie chose her own path and decided she didn’t need these men. She moved out of the city away from them to have a fresh start, with no fae at all.

It was truly excellent and novel.

And in this book? Irial is stalking her, following her everywhere to keep her safe. And she calls Niall on the phone at night so she can feel safe in her apartment. She is constantly having to resist going back to either of them. And, ultimately, she is rescued by them when she is threatened by her abusive brother.

I feel like so much of what happened in Ink Exchange that impressed me was now badly undermined. Her desire to separate herself from the court has been ignored and she can’t bring herself to make it stick completely even though she still thinks it’s dangerous and unhealthy. The independence she asserted is being pulled back, her decision to avoid things and people she knew were harmful is being reversed. And I left the book with a feeling that it was only a matter of time before Leslie returned to the Dark Court.

A story about her confronting her brother, dealing with her trauma and forging a new life without the fae? That would have been interesting. Even her having some residual powers as the Shadow Girl, I’d have liked to read that as well.  Those would have been powerful and continued the messages and story that Leslie has already carried.

In other irritations, they often hinted yes/no/maybe relationship between Niall and Irial has finally been more clearly labelled as actual attraction and affection between them. I’d be happy for the inclusion, but these 2 bisexual fae went through a full length novel with coy hinting and it was only in a subsequent short story where it was allowed to be clear – and still that affection between them is placed as secondary as the affection between them and Leslie. This is not an uncommon trope, if we have a bisexual character with opposite sex and same sex love interests, then the opposite sex love interest will be raised higher.

All in all, while I don’t think the novella was awful in and of itself, I don’t like how it has followed on from ink Exchange – not only was I not a fan, but I feel it has detracted from that book as well.