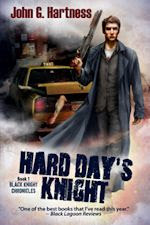 James Knight is a private detective and, more, he and his friend Greg are vampires.

And they do not sparkle. Nor do they tragically lament their lack of humanity or woefully decry their fate as the undead. They’re not super hot either. But they do play X-box and read comics.

They’re also pretty good at this private detective thing, especially with their vampire skills. And they still have their conscience. So when a kid needs help to protect him from a powerful witch who is going to kill him and his whole family, they feel compelled to help, even though they don’t like him very much.

But they’re bite into something far larger – with a whole string of kids going missing, a suspicious police officer who wants to know why they’re involved, a Fallen Angel telling them to back off because they’re meddling with things they can’t control and a terrifying force possessing kids that can melt a silver crucifix.

With children in the firing line, they can hardly back down no matter how far above their heads it is.

I can’t entirely say why, but I love these characters. I love that they’re a little childish, even with 50 years under their belts. I love that they’re comic nerds, I love that we have vampires – actual vampires – playing X-boxes and keeping up actual mortal hobbies. Yes, we have vampires who don’t spend their free time staring morosely into space, they actually have lives and a job (albeit the usual “private detective” job) they have fun and they have friends. And even the job is done with a sense of it actually being a job. The research they do is described and makes sense, when disguising themselves in the hospital he chooses to go in as a janitor because disguising yourself as someone with medical knowledge is a bad idea. There’s a level of common sense and even realness there that you don’t often get, especially since “private detective” has too often become short hand for “loose cannon with a big gun”.

And I like that they actually like being vampires and consider this a norm al state for a vampire. They have no angst, they don’t kill people (though Greg guilts James about feeding on people). They don’t act like not being able to see the Sun again is a tragic agony on par to never being able to drink coffee again (a fate that would have me lamenting my undead status, I can assure you). I love that they’re not 150 years old of suaveness, I love that they still consider themselves pretty new at the whole vampire thing and checklist what powers they have and haven’t

And I love that they quietly mock these vampire tropes, that they point out they don’t sparkle and poke fun at the super sad tragic poetry they’re supposed to write.

Without upsetting many of the traditional legends (they’re weakened by silver, can’t go in uninvited, can’t abide sunlight), they still manage to subvert so much of what vampirism has become in popular fiction just by dumping the maudlin tragedy. They’re not sad, they’re not tortured and they’re not unbelievably-zomg-hawt, they’re not mysterious and they’re not constantly tortured by hunger. It makes it new, it makes it fresh and above all, it makes it fun.

Which is the main reason I like these characters, they’re immense fun. They’re not perfect, they’re full of flaws and they’re not always the smartest, they’re very much people in their own right. They have a lot of fun snark back and forth, have a very strong strength of friendship and every now and then drop lines like this (said to their friend, the Catholic priest): “Mike, are you consorting with Wiccans again? You keep this up, and I’m going to put a COEXIST bumper sticker on your station wagon”.

Unusually, the protagonist may be one of the more inept of the main characters. He’s capable and a decent fighter – though his sidekick, Greg is stronger. But Greg also seems the be the more intelligent, educated and informed as well. In fact Greg is an interesting character all round. He is fat, which is rare enough in Urban Fantasy, but he’s a fat character who is also active not a support character back in a computer nest or library as is often the case. He does do the research and computing as well – but that’s because he’s very well educated and fiercely intelligent, far more so than James as far as we can see. He does embody some fat tropes – he’s clumsy, albeit not a lot more than James, and he’s socially awkward but, again, James isn’t exactly Mr. Smooth Charisma here. Greg does go toe-on-toe with a demon and is just as dangerous as James, a vampire of the same age.

Greg’s weight is referred to a lot – and sometimes in a positive way, speaking of how his weight and being bullied for it gave him compassion for people who were bullied, ostracised or cruelly treated. But it’s also referred to a lot in general description, worry of him falling through a roof, him being compared to a good-year blimp in spandex. It’s a shame that we have this good and then it gets this laid on top of it.

There are a few female characters in this book, but there’s a whole lot of sexualising and other problems going on. Sabrina Law is a detective and from the very second we see her James has already checked her out. There’s a very Harry Dresden-ish way in how James instantly assesses her attractiveness and that is constantly repeated in every interaction with her and it’s not limited to her either. The other women in the story who is not pre-16 or older is Lillith. Now, a lot can be done with Lillith, the proud, defiant first wife of Adam who refused to submit to him or god. She can be a mother of all demons, she can be an avatar of defiance and free will. Consequently, her being the woman who wears scanty clothes and is always described in terms of how sexy she is and how seductive she is and how addictively sexy she is and did we mention the sexy? Because she’s sexy. Well, seems a waste, rather shallow and more than a little juvenile even for a book where the main character is a little juvenile. Lillith could have done to have more depth to her than she-who-is-sexy. Even the Wiccan consultant had to be sexually attractive and have how her curves looked in tight jeans described.  It’s skeevy when every woman in a book between the age of 18-45 is described in terms of how sexually attractive she is.

Other than attraction. Sabrina is referred to as “a ball buster” and “man eater,” which I didn’t care for, especially since her behaviour is pretty much par the course for fictional hard boiled detectives (and a damn sight milder than some). I do like that she's totally not impressed no matter how many vampire tricks he uses

There’s only some token POC roles and no GBLT people – but beyond that, James virtually has “no homo” plastered on his forehead. He’s constantly making references to double, triple, quadruple assure us that he’s not gay. It’s sad, it’s not funny and even worse in a book that has no GBLT people.

Overall, this book is immense fun and it manages to be fresh and new not by re-imagining vampire imagery, but by avoiding the tropes that have become so common in the genre. These vampires are more human with their free blood feeding and X-boxes in a way that no amount of tortured angst over the people they’ve killed ever could be. And it’s funny, it keeps moving, has a decently interesting plot and is an all round fun, fluffy read.