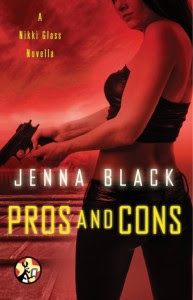 And this client does sound very desperate since many other private detectives have turned her down. And for good reason, her task is almost impossible for anyone but Nikki. Of course, an extra reason for the desperation is that her client is lying and a very dangerous man is involved – the situation is far more delicate and far more is at risk than she originally thought taking the case.

However, as far as novellas go this did everything I hope for. Firstly, it isn’t an essential step on in the series – to continue to follow the Dark Descendant series you don’t have to read this book. It doesn’t add any vital building blocks to the story or leave you floundering if you skip it. Similarly, as a short story it isn’t essential to have ready the rest of the books in the series  - you can pick this up and follow the story without any real difficulty. It certainly helps to have read the other books, but it’s hardly necessary.

But, above all, the book is self-contained. It’s hard to get the pacing of a short story right – it’s too easy to write something that doesn’t have enough material to cover the whole story, or something that feels rushed and cut down and probably doesn’t have quite enough plot for a full book but is still far too meaty for a novella. This book was perfectly spaced and perfectly paced, it didn’t need more explanation or development, it didn’t need nor did it have info-dumps to try and cram 2 books worth of backstory into it, it didn’t need several chapters to give us Nikki’s backstory – though it did include her history neatly and succinctly. It was a great little introductory book to the characters and concepts of the series without feeling like I was reading a trailer.

The story itself was interesting – it showed Nikki doing some very clever detective work. Part of it involved her Artemis powers but only by giving inspiration. I love the subconscious nature of this power – I can’t help but wonder if this is a little dig at so many mystery stories where perfectly mundane detectives have these incredibly unlikely flashes of inspiration based on zero evidence; I hope so. But the steps of the investigation are not only interesting but they’re really imaginative and clever and show both the lateral thinking necessary to solve these really crafty, cunning cases. I loved it.

I did like how completely and utterly non-judgmental Nikki was over her client’s story. She expressly said she’s making no judgments repeatedly whether she was having one night stands, working as a sex worker; she was adamant that it wasn’t her business and wasn’t her place (or desire) to judge. It was only when we got to the real motivation that Nikki became unhappy both because of the criminality of it and because she was being lied to. It was really well done to cover what this woman was doing, the con racket, without ever once sexually shaming her. The only downside to it was how dismissive Nikki was about the class elements of her story – like comparing her to Nikki’s sister. She compares both women as constantly fielding unwanted sexual advances because of how beautiful they are but dismisses the difference between her sister’s extreme wealth and power and the fact Heather can only make ends meet with her illicit activity.

It’s a fun read, a quick short burst of a world I like and showing a little more of Nikki’s more mundane life without the Liberi taking over and dominating everything (albeit with an added dose of Loki added to the mix) and definitely worth picking up to complete the series, even if it isn’t essential.

An ARC was provided of this book through Edelweiss (Over the Treeline). The book is released on the 25th February