This Is Your Life: Oberon 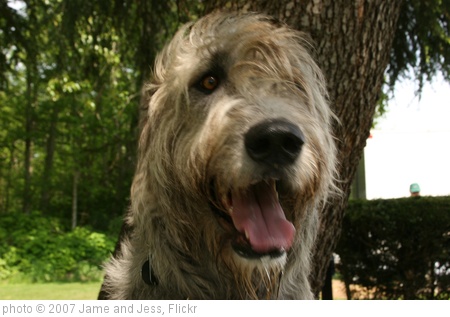 What is he?: An Irish Wolfhound (with extra longevity)

Biography: Best friend to Atticus, the 2,000 year old druid; the awesome Oberon has been his constant companion since Hounded loyally by his side, teller of tall tales and epic legends; he has been hunted by the police as a killer, used by a goddess of the hunt, tricked by coyote and much admired by the Tuatha de Danaan. He’s fought furbolgs and fairies and the cats of the widow MacDonagh. Without him, Atticus’ life would be much poorer, much less

What We love about him: First off, how can we not be amused by his constant scheming for sausages and poodles - not necessarily in that order either. He’s smart as a whip and has the perfect line for even the weirdest situation. Like any good hound he loves to hunt and even sometimes uses his fantastic olfactory sense to keep Atticus out of trouble.  He can also provide the perfect bomb to irritate nosy neighbours and for that alone, I want to borrow him.

Oberson is absolutely necessary to this story. Without him, the stories would simply comprise of Atticus pissing off various God, from various pantheons and running for his life. Oberon is the comic relief that humanises Atticus and elevates the story. Without him we’d have none of the banter that breaks up these books - they simply couldn’t work without him.

What we hate about him: Hate? Oberon is flawless, all right thinking people agree.