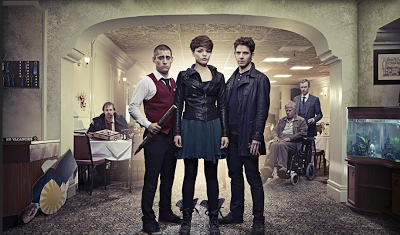 After five seasons, Being Human (UK) has aired it's final episode. I am not going to do a typical recap because I think a series finale deserves more.

The major antagonist this season was the devil.  It makes sense that the writers and producers would choose to go with the ultimate evil, firm in the knowledge that the story would be coming to an end. Throughout all five seasons, Being Human (UK) has been based on the friendship between a ghost, werewolf and a vampire, and their desire to retain as much of their humanity as possible. I don't believe that I am wrong in saying that friendship is what made Being Human so unique.  It is part of why I was worried when the original cast was completely replaced at the end of season four.  Given the short time that the writers had to make Alex, Hal and Tom into a realistic pseudo family, they did a wonderful job. I loved the interactions between them, just as much as I loved the relationship between Mitchell and George.

I felt that Alex in her short stint was far more interwoven into the lives of Hal and Tom, than Annie was with George and Mitchell. It came with the added bonus of having Alex tackle sexism.  On more than one occasion, Alex had to make it clear that she was not content to play the little woman, while Tom and Hal ran off to make the money. Her sense of confidence, is something I wish we could have seen more of from Annie. It makes to have a female character have to deal with sexism, especially from an archaic patriarchal male like Hal and while I appreciated this, it made me wonder why Annie who was of colour and also a woman never had to deal with issues surrounding her gender and race. Annie's issues mainly had to do with her being a ghost for the majority of appearance on the show.  It's only is season one that has to deal with gender issues like the attempted assault by Tully and of course her murdering fiancee Owen. In the case of Owen, Mitchell wanted him to leave but it was George who had the final say.  George did not disown Owen until he discovered that Owen was responsible for turning him into a werewolf.  This firmly positions Annie as another in this three part relationship.  It's George's assault that matters not Annie's.  Annie didn't actually come into any power until both George and Mitchell died and then she ended up sacrificing her own after life whereas; Alex is given a real second chance at life.


My largest issue of the replacement of Annie with Alex, is that it left us without a leading character of colour.  We did have a few appearances from Alan but his death by Crumb, who was trying to redeem himself, made him irrelevant.  For the entirety of Alan's appearance, he was little more than a sidekick, following orders. Annie most certainly did not have to deal with racial issues but at least she was more than a throw away character. It's very much as though Being Human existed in a world where people of colour don't experience racism, even when they are visibly a minority.

Perhaps more than any other season to date, season five really dealt with addiction.  We learned about Hal's cycles of sobriety and how despite his best efforts, he kept falling off the wagon.  Mitchell absolutely did some monstrous things however, Mitchell found a way to feed safely; whereas that option was not given to Hal. With Mitchell, it was more about the negative consequences that came with his desire to feed rather than the push for him to abstain altogether.  Hal was more typically and addict and was given a list of chores to perform to stave off the desire to feed.  It was like he was constantly working a program with Alex and Tom both functioning as sponsors and when necessary judging his guilt.  While it is typical these days to have a vampire angsting about wanting to be human despite the clear benefits of vampirism, Being Human is unique in that it continually juxtaposed vampirism with addiction.

Class and education were also very much issues this season.  Hal was clearly an educated man and of course, living as long as he had, gave him certain advantages. Tom, who was homeschooled by McNair, simply did not have the benefits that Hal did and he was absolutely desperate to bootstrap his way to the top.  I think that it showed how upward mobility is next to impossible without a support network and that many of the behaivours which we associate with class, are learned behaviours which have become naturalized. No matter how hard Tom tried, he was always going to be one step behind.

In the end, the characters of Being Human were rewarded with their humanity. By killing the devil, they no longer had to pretend.  It felt very much like a fairytale ending and though it resolved the issues of the characters, part of me felt like that it was far to neat given the blood and the violence which has been portrayed on Being Human for the last five seasons. It's further particularly problematic given the addiction storyline because it suggested that if you remove the cause, that addiction can magically be cured.

The transition to human would have been fairly easy for Alex because she had just died but I think it would actually have been far more difficult for Tom and Hal. I would have liked to have seen a small flash into the future to get some sense of how the characters ended up.  I suppose that if you accept that the goal of the characters was always to be human that them becoming human ended their problems but life never wraps itself up so neatly. Let's be honest, humanity is messy and very painful at times. It can even be monstrous so the very idea that becoming human solves the characters problems is not in the least it realistic. I really think that the show could have benefited from one more episode.

I am going to miss Being Human and I actually liked it a good deal more than its American counterpart. The dialogue was often quite witty and though there were many issues with the show in terms of erasure (one GLBT character in five years who then killed his lover) and racial issues (yeah a character of colour who never deals with racism is not good inclusion) and turning the addicted in monstrous beings, for what it was, it Being Human was unique.  The relationships felt real and it was easy to embrace the partnerships they created. Unlike so many shows and or movies in this genre, Being Human (UK) was story driven and not dependent on big special effects to tell its story.  While I well never be happy with the ending, I can honestly say that I enjoyed the journey.