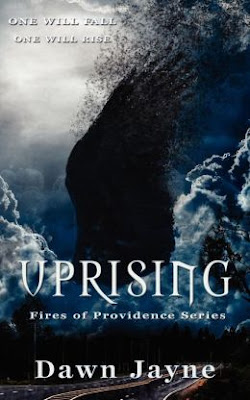 Tyre was a Herald, one of only 9 in his choir, the most powerful and isolationist of the angelic choirs and the only one that is not born human. He’s willing to act more than the others, helping them put humans on their chosen life paths in which they follow their plans and try to learn and grow as people, resisting the temptations of the Fallen. He’s the only one to risk it since the Fallen hunt angels – and they all desperately need the wings of a Herald to complete their set. But his arrogance brings about his downfall when he breaks a rule that no-one can overlook. The Heralds are now down a number – which means a new angel has to be tapped and past the trials in the human world.

Rise has had a hard life, adopted by an extremely religious and abusive couple she finally flees when she’s old enough to leave. She’s now struggling to set up her own life and find her own way and put those memories behind her. With few friends, it’s difficult but she’s managing.

Until Dominic enters her life. Brand new angel and deeply wronged by Tyre, the last thing he wants is to deal with another Herald, their power and their awful attitudes. But he’s nothing if not dutiful and he struggles to guide her down her path to ascension without telling her who she is – while also using her as the one Herald who is willing to be in the human world while the others become even more isolationist with the loss of Tyre.

This book gets massive points for originality, it’s certainly very different from most Urban Fantasy, and certainly most Urban Fantasy with angels I’ve see. The different choirs all with their own roles in adjusting, planning and guiding human souls on their life paths. The humans then plan and go through several; life times, facing challenges and temptations but learning and growing for each one until… I’m not actually sure what the end game is

But that’s because of how the world building is presented. Despite seeing the many different coloured choirs, no-one sat down and explained what each one did. No-one told me why humans were ascending, or why the fallen existed or what they did or why they were tolerated or why they were attacking angels. These things just were. And they just were because every relevant character already knew. There were no convoluted info dumps, no “as you know”, information is provided only when it would be natural and sensible for the characters themselves to provide it. And until then, we don’t get it – we don’t need it. Sure, if the book went on and there was just bad guys who attacked because they were bad, it would annoy me, but it didn’t. Things we needed to know were explained – but only as and when it became appropriate to explain it.

This is especially important in a first book where it is so tempting to dump all the information about your world in one great big chunk. It was well resisted and well presented.

And I quite like the two main characters. Rise has had an awful past but, unlike so many other protagonists with terrible tragic pasts, she isn’t using it for cheap characterisation nor is it an excuse for lots of sad monologues. It’s a motivation for her, it’s part of her life and she certainly has ongoing issues that stem from it which aren’t brushed over. But it is treated with respect without it being overwhelming. I’m still rather overdosed on protagonists with tragic awful pasts, but this was one of the better ones. I’m curious as to how her nature will develop, her somewhat callous, uncaring nature is presented as an inherent part of being the Herald – but there’s no exploration of her “I have to look after myself” being a potential result of her abusive past.

Dominic is also interesting if a little too perfect. The newly ascended angel on a mission to teach the Herald. There is an issue of him being harsh, patronising and condescending to Rise because of his contempt for the Heralds and his history with them – but it’s not only unfair but looks very skeevy considering the power he wields and how he uses her.

I like Dominic’s evolution from hostility towards Rise because of what Tyre did to him to slowly seeing her as a person; it’s a nice and reasonable evolution that involves some decent growth. Except, I think we’re heading from “I see her as a person” to “I see her as a love interest.” Especially when it came to the “I see her as a love interest and now trust her unreasonably despite despising her a week ago” which has led to the classic spunky behaviour we get in these instances. I think he was evolving nicely, then he jerked forward ridiculously and led to actions that fit the ending but didn’t fit the characters. similarly the ending didn’t work so well for me with Rise, since she went from “this is all so new and confusing” to “I HAVE PERFECT SUPER PLAN!”. I liked that she resolved everything with intelligence, calmness and skill rather than super powers, but it involved another jerk of understanding, a leap forward on comprehension on her part that I didn’t follow. The ending wasn’t bad, but it felt like both characters fast forwarded their development and knowledge to reach it.

The underlying premise behind this book is troublesome. These souls map put their human lives beforehand, creating challenges and temptations that they will then face and overcome and therefore move forwards. Sounds simple until you realise that the hardships and disasters these people face are not only pre-ordained but actively chosen by the people who suffer from them. In particular we have a woman whose daughter is kidnapped by a child molester and everything’s derailed because Rise interferes and saves the child – ruining the divine plan. She is WRONG for saving that child because the souls concerned have already PLANNED the child’s molestation and murder (the soul of the child sacrificing so the soul of the mother could grow and develop dealing with the grief and pain of having their child horrifically murdered).

Similarly, Rise herself has to go through various trials to ascend as a Herald. One of which includes being adopted by her right wing Christian parents and her father forcing “virginity tests” on her teenaged self while she was pinned to a table.

This whole idea that the victims have actively chosen and planned their own suffering just has some really awful implications and gives me a severe case of the uckies, especially with the examples they’ve used.

We have some minority characters but there are problems. The Pakistani Muslim characters are a doctor who lost his way and is now pretty much doing whatever the angels ask of him to find his way again (never mind that it was a Herald’s fault he lost his way – and his deviating off his life path turned him into a doctor who helped people) and Saba, a girl who was stoned to death for being with a boy after being promised against her will to an older man she didn’t want to be with. She’s brought back from the dead to serve and protect Rise, literally that is her role in life (or unlife). This is what she exists for.

Similarly Emory is a gay man who is a condition that is making him go blind. His role in the story? To help Rise. To research for Rise, to be a supporter for Rise, to be an advisor for Rise. Contrast that with the straight, white characters in the book who are far more driven by their own motivations.

We have a lot of sexism being challenged in this book in a way – with Saba’s treatment and Rise’s treatment being openly condemned as horrific and even at the adoption, the lawyer being concerned and discomforted by how under the thumb of her husband Rise’s adoptive mother was. But then we have moments like Tyre being offended that they’re going to replace him with a female angel – why would a Herald, an angel who has never actually been human, give a damn about the gender of another angel? Really? I also don’t like that the only female friend Rise has is Saba – and even then that’s due to Saba’s extremely loneliness and isolation and holy mandate to serve Rise. Her adoptive mother was ineffectual and evil, the only female angel who regularly appears doesn’t care for Rise because she’s a Herald and she has the hots for Dominic

I’m left definitely curious, I want to know where this is going and what will come from it and how these characters will develop. I’m also curious as to whether this will be just a personal tale or there will be more addressing the system and the potential injustices of it and the nature of the fallen and what they have to endure; to say nothing of the actions of the Heralds. At the same time I’m leery because I have a horrible creeping feeling that we may end up with a Dominic/Rise romance and all the wonderful potential of this book lost.