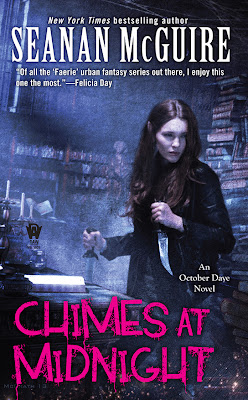 October Daye has a mission – to get Goblin Fruit off the streets. It’s a powerful narcotic, loved by Pureblood Fae – but it’s lethally addictive to humans and Changelings. Emphasis on the “lethally”, it will kill them. Unfortunately, the Queen doesn’t care – what do Changelings dying matter to her, even if dozens of children have died? And she doesn’t like October either – so she can have a banishment.

That leaves only one choice. The Queen has to go.

That’s quite tall order for deposing the local monarch – but she’s not popular and October has a lot of friends with some very cunning ideas and some long hidden secrets.

The plot of this book is Epic and Urgent and Heroic and Magnificent. Which is awesome. In fact, we need more unnecessary capitals – it was AWESOME. But it’s also hurried and a little disjointed.

October is taking down the Queen. Which means lots of manoeuvring to desperately come up with an idea that would knock her from her throne, which means lots and lots of brainstorming and lots and lots of rallying the troops. It means October rushing around everywhere and speaking to everyone. It means we get to see everyone, all the excellent character we’ve come to know and love (and I do love the characters in this series, more on that later). It makes that wonderful, spine-tingly epic feeling you get when a story is real and exciting and powerful and you can almost feel the epic consequences of the characters actions. Overlaid over all that is that wonderful, viscerally satisfying feeling you get when a long standing aggravating character is about to get theirs (the “Joffrey Slap” feeling). And there’s a time limit so all of this happens real fast with an extreme sense of tension and panic about it – because time is running out.

3 days? Is far too short. It makes the whole kingdom look kind of odd that it only takes 3 days to depose the sitting monarch. I would actually have rather this be an epic campaign taking part over several books as October rallies her forces, gathers her allies forged in several books of helping and heroism and challenges people to pick the unstable, dangerous, fickle queen over her and her claimant. That would have added an extra layer of epic to an already epic tale – and made it more momentous that she had to gather all these forces and spar with the Queen for so long.

As it was, the story was still epic – but there were elements that felt forced or could have been better. Like taking over the queen’s castle full o’guards with just 2 people. Or the Queen able to perform near miracles with her Siren abilities (why don’t sirens rule the world?) Or the Queen only having a few gambits against Toby and Toby merrily teleporting left, right and centre to avoid them – leading to a disjointedness of her not spending much time in one place and not really hashing things out with Tybalt, Sylvester, Jazz or Walter.

Don’t get me wrong, it’s a truly awesome, epic book with lots of excitement and powerful scenes. But it could very easily have been more if it wasn’t so hurried. It’s less a complaint and more a lament about what could have been.

Along with the great story we have some great world building – and I do love the world of this series. When October found herself shifted towards the human end of the spectrum I was kind of sad because I thought there wouldn’t be much chance to explore Dochas Sidhe and what that means if October was barely fae at all.

What we did get was a lot of foreshadowing of more to come – with a prophecy and a lot of the Luidaeg and all revolving around the First Born and October being a Dochas Sidhe – so I think I just need to hang on in there because it’s all coming.

Even with October being more human than not, this was used as an excellent source of world building in and of itself. The way the human mind rejects the fae, how, with her more human senses, October had trouble even seeing the fae or when she did see faerie, truly believing what she was seeing. It showed how lost humans are in faerie because they simply cannot see most of it or understand it. It brought home their weakness – physical and sensory – really powerfully to see October become so fragile and lost. Yet even within that we had a counter narrative, with a nearly-human character who habitually wore ointment then being the one they turn to to see through glamour – because she’s the only person who always wears it. Her weakness became an asset – and that’s beyond the fact she is awesomely efficient and keeps everything working in truly awesome style.

In between that, we did get more hints about what Dochas Sidhe can do – how altering the balance of someone’s blood can be a devastating weapon (by removing the faerie powers connected to one part of their heritage) and an amazing asset (by stabilising mixed-fae since different strands of faerie magic since again we see that some strands of faerie conflict) – as well as basic skills we’ve always seen October use but never realised just how specialised they are; like being able to sense individual fae’s magic as well as their ancestry.

There’s a big reveal with Quentin which was also pretty well done – but missed the whole “zomg really?!” surprise because it has been pretty obvious for the last… 4 books? Still, nice to have it out in the open.

The characters continue to work well together – including October (who was largely unmangled this book which was a relief since she does spend a lot of time being mashed – but then, she was inherently weakened by Evil Pie so that is probably a stand in). A combination of skills without being super powered (especially this book – though it was her super-shiny tricks that saved the day), ideas without being a genius (albeit ideas that worked because of a heavy dose of Narrative Necessity)  and friendships and loyalties that have been built and earned and showcased. The characters bounce off each other well and have real chemistry – I can see May as Toby’s sister (even if she isn’t) even when May shows a side to her that comes from the Night Haunts she used to be.

And I actually like Toby and Tybalt’s relationship – and wanted to see more of it! It’s rare for me in a romance – because so many romances have so little time invested in developing the connection; we get eyes crossing at a distance, insta lust and then BEHOLD LET THE HUMPING BEGIN! The time spent on October and Tybalt connecting over the series made me much more invested. I like as well that there is a continued challenge to any protective instincts Tybalt has towards Toby – he can help her, but no, he can’t wrap her in cotton even when she is weak and fragile from being too human – he has to work with her and not hover over her.

I even liked Arden and her reluctance –because they are asking a lot of her, asking her to throw away her old life and take a huge risk and it wouldn’t have been real if she’d just leaped into the role joyfuly.

And the Luidaeg is awesome: “I can only do fucking terrifying once a day before I get bored and want to do a crossword puzzle or something”.

We have a number of minority characters alluded to. On racial minorities we have Li Qin Zhou and Jazz are South Asian and East Asian respectively and they’re both in or have been in relationships with women – along with May. I don’t have any problem with how they’re portrayed, they seem to be decent characters but I do wish we had more of them present. Li was around more in a past book – but largely as driver – and May briefly followed October around this book, but largely held down the fort. Jazz helped with her raven troop, but there was very little about her. I’m glad Li has been around more in a previous book and I hope we will see more of the others in later books – especially with the ravens being involved – because they’re great characters but need to take a big step forwards and not be lurking inclusion elements.

We had a vision that the Luidaeg has at least kissed another woman in the past – I both squee and try not to hang too much on it.

And after 7 books we have the series’ first gay or bisexual man – Madden who has a boyfriend as is mentioned in passing by Arden. Madden, the Cu Sidhe. The dog-man. The man who is servile, devoted and overwhelmingly fawning to Arden. A man who is more of a pet than a person. The only gay man in this series is a woman’s pet-servant. It’s like someone sat down and thought of the most offensive way possible they could portray the “GBF” trope. It’s really pretty sad.

We do have some excellent take down of both addiction and class. How changelings often fall into the trap of taking Goblin Fruit even though they’re told it could kill them because they don’t trust the pureblood authorities not to be lying. This is a great parallel to our actual drug campaigns where so many don’t believe the “don’t do drugs” messages because there have been so many ridiculous, hyperbolic or outright deceptive PSAs. Add in the fact that Changelings, as a class, are considered utterly expendable by the Pureblood authorities, to an extent where them dying from Goblin Fruit isn’t even seen as a problem by the Queen of Mists while simultaneously demonising them for the foolishness of turning to lethal drugs from the despair of being thrust so far down the ladder. It’s multi-layered, extremely well done with a powerful side message of not ever blaming the users – but seeing them as victims.

I also like that, from that, we have the acknowledgement that while King Gilad was NICER to Changelings than the current Queen, he still regarded them as lesser. I think this is an important distinction because it recognises the societal nature of the prejudice rather than just saying “she’s a bad person so thinks bad things, unlike these good people.”

In the end, this book was an excellent read, covering some excellent issues, with an excellent world and some truly excellent characters. It was excellent. I sat down to read it and didn’t stop until I had cleared the last page and then I looked down with a sad sad expression on my face because it was over and I couldn’t read any more, alas. There were some issues that I really want to see improved and I do think there were some missed opportunities in this book that would have turned it from excellent to monumentally awesome for eternal fanpoodling – but it was excellent, nevertheless.