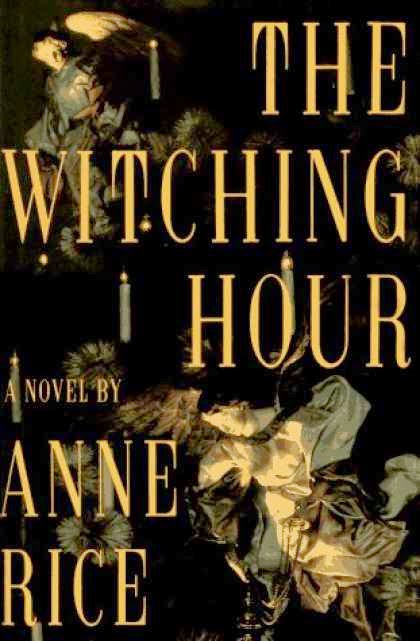 There’s a house in New Orleans, in the Garden district that has slowly fallen into disrepair. It’s the residence of the core of the Mayfair family – the Mayfair witches

For generations the Talamasca has watched the Mayfair witches since their distant ancestor was burned at the stake in Scotland. Her descendants since then have passed on her dangerous legacy – a magical gift and the Lasher. A spirit of ever increasing power and dangerous, unknown motives – a creature that definitely has blood on its hands even as it put gold in the Mayfair pockets

And now, reaching the 13th generation of Mayfair witches, all that knowledge over the centuries may finally be needed to reveal the Lasher’s eventual plan.

Some books are long

Some books are very long

And then there’s Witching Hour which is much much longer than that.

It’s not just the length of the book – and it is a mammoth 1,200 pages – it’s how long the book feels as well. Some books can be really wrong and you still dive through them because they’re awesome – they feel short. And some short books drag on because they feel long with dense, awful writing and lack of any real pacing. Well, this was an incredibly long book THAT FELT EVEN LONGER!

The writing is so dense and so boring and so repetitive that it is an achievement to get through. It has to be said about Anne Rice that she is good at establishing time and place with evocative description – and she certainly does that in this book. But she doesn’t do it once – every place needs this description dozens of times, over and over the same points, the same places, the same times are described again and again in really long winded terms. Any evocative sense of setting is lost in the sheer overwhelming wave of unnecessary verbiage.

There’s a lot of grossly unnecessary detail. I struggled to start this book because we were treated to such a long winded, unnecessary analysis of Michael’s life before we were ever given any reason to connect to this man that I nearly gave up right there. I have no idea why we need the best part of 100 pages to describe Michael’s past or what it added to the book. But the same thing happens several times – Petyr can’t just be an agent of the Talamasca, we need to know his life story first. Some random agent in the 20s couldn’t just be a Talamasca agent, no, we needed to know his childhood, his history, how he joined the Talamasca, who he worked with… so much information for so little purpose. We can’t just get the story of Rita Mae, childhood friend of Deidre – no, we need to include far too many details about Rita Mae as well and I have absolutely no idea why I should care, why this is relevant or why I am having to read this.

To make it worse, the repetitiveness comes in as well. Rita Mae tells her story, then we have it repeated in Aaron’s narrative. A doctor tells his story about Deidre – which doesn’t really add anything unique – and then that gets repeated by Aaron. A priest tells his story, a nun tells her story – and then all these stories get repeated again. And these stories themselves are an exercise in redundancy. To show us how meticulous and creepy the Talastalkers are, we get the same information from several different sources to really drive home just how assiduously the Talastalkers have left no stone unturned in their quest to be the creepiest of creepers. So, yet MORE repetition!

And let’s have a swipe at the Talamasca here – because I’m still somewhat at a loss as to what exactly they’re doing? Trying to stop the Lasher? Well you’ve had 3 centuries of doing absolutely nothing towards that goal. The mere thought of the Lasher makes them cower in their beds. Ok, is it to help the family? Well you had evidence of generations of incest and multiple murders and didn’t feel the need to intervene. So is it just curiosity? Because that seems like a really dubious justification for centuries of riffling through someone’s rubbish and stealing their medical records. It’s not that curiosity isn’t a real motive – it is a very reasonable motive. But if that is the motive then the Talamasca are severely creepy, entitled and unethical people who feel they can intrude on someone’s life to this degree for the sake of their own nosiness. Hence my reference to Talastalkers.

The way the book is written also makes it very hard to connect to any “character” beyond Rowan, Michael and maybe Aaron, while at the same time only really including them in the story in a meaningful manner at the beginning or end. The rest of the book is one long (oh my gods how long), recitation of history, read by Michael. It’s a really terrible way to try and garner any sympathy or connection to the majority of the actors (I won’t call them characters because we don’t connect to them as characters) in this book. It’s not like reading a history book – it’s like reading about someone reading a history book and is every bit as fascinating as it sounds. This made the vast majority of the book to be incredibly dry without any real sense of emotional connection. I felt I was taking notes – I wasn’t investing in people’s stories, I was noting down facts like I was in a history lecture, lining up the descendants and vast array of names without connecting or caring about any of them. I didn’t feel the tragedy of Antha and Deidre, I didn’t feel the joy of Stella or the capability of Mary Beth or the naivety of Deborah. It was too long and it was too separate and too many of the stories were too similar. It was just a list, Stella begat Antha, begat Deidre. And even the list wasn’t that simple because the cloud of names, the endless incest and the awful documenting and chronology (switching back and forth all the time really doesn’t help things)

When we get to the end and actual action rather than characters reading boring histories, I was thoroughly fed up. Beyond fed up. I desperately wanted this book to be over – but at least things seemed to be happening, at last things were beginning to be explained and expanded… and for some reason Rowan completely transformed as a character. I have no idea what happened to her, I have no idea why she folded completely and if the book hadn’t already beaten me into whimpering submission I would have thrown it down in annoyance right there.

The portrayal of minorities in this book is pretty appalling. Black people are slaves until we reach the end of slavery – and then they’re servants. They're well treated, highly praised and very loyal slave and servants - but they're still slaves and servants. Often with extra woo-woo insight because it’s an endless trope that the more melanin you have the more woo-woo there is. It’s a rule. Oh we have Michael’s old neighbourhood now being all run down and dirty and dangerous and crime ridden and full of *gasp* Black people – the horror, the utter horror!

The family has one bisexual member, Julien, and he is told through the eyes of one of his lovers. Julien is singled out as the most debauched member of the family – there’s more hatred expressed against him, more vitriol for him being perverse and incestuous and lots of really prejudiced, tropey lines like how Julien needed to seduce people, how he was ruled by lust. And, of course, he was a paedophile - just to make it clear that the bisexual is the most depraved of them all. Even other incestuous family members (and this is the Big Book O’ Incest) like Cortland are not regarded with anything like the same venom or viewed as being ruled by lust, some are handled quite sympathetically (like Charlotte) or even put on pedestals (Petyr – the Petyr did apparently dream, as a child, of being molested. Dream as in want. Yesss…). And I have no idea what "he made love to me just as if I were a woman" is even remotely supposed to mean.

We also have some not-even-slightly-subtle anti-choice messages really rammed into the front of the book. Not just Michaels far-too-long (everything in this book is far-too-long) ramble about his ex aborting a baby but then Rowan adds her reinforcement with evil abortion doctors stealing foetuses.

My only hope after this is it’s done. I now know the Lasher. I knew the Mayfair family in more detail than anyone could ever wish to. It has all been set up. So Lasher and Taltos are going to be much shorter and more concise. Right?

This is one of the books where we’re irreconcilably torn, and this is reflected in the fang rating. I, Sparky, cannot abide this book. If it hadn’t been for our plan to cover Anne Rice’s linked series before October I would have put this book down at the 20% mark and DNFed it. Having slogged the whole way through this awful book, I’d give it 0.5 fangs. If pressed extremely I’d stretch to 1 Fang – but in my eyes it doesn’t deserve 1 Fang. Since starting Fangs for the Fantasy I have never read a book I have enjoyed less than Witching Hour. Renee likes this book and wants it to score far higher. To try and find some midpoint between us we’ve gone for 2.5 Fangs.